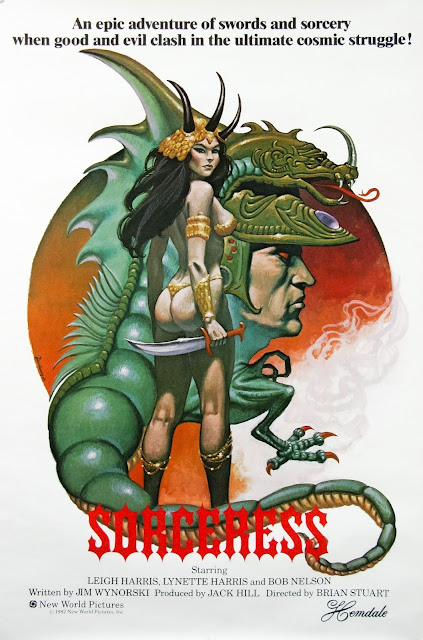 Sorceress boasts one of the best posters ever wrought for a movie of this genre. I've always found the image by Robert Tannenbaum above of a haughty sword-wielding maid against a mysterious dragon-inspired background fascinating. Too bad it has virtually nothing to do with this hilariously bad movie featuring a pair of lovely twins who cannot act much and are mostly famous for appearing in their double-mint naked glory in Playboy. 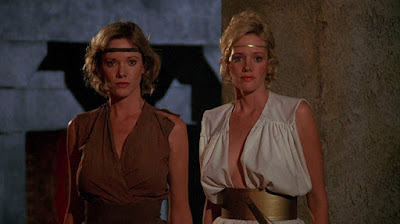 The twins are Lynn and Leigh Harris and they are the heroines of this ramshackle affair which puts out some of the dopiest scenarios captured on a sword and sorcery movie. This one came from the bowels of the famously cheap New World Pictures operation helmed by infamously miserly Roger Corman. And this movie showcases Corman's penny-pinching ways to the max. He wouldn't even cough up the cash to cast notorious and all-purpose B-movie actor Syd Haig. And this movie desperately needs a Syd Haig. 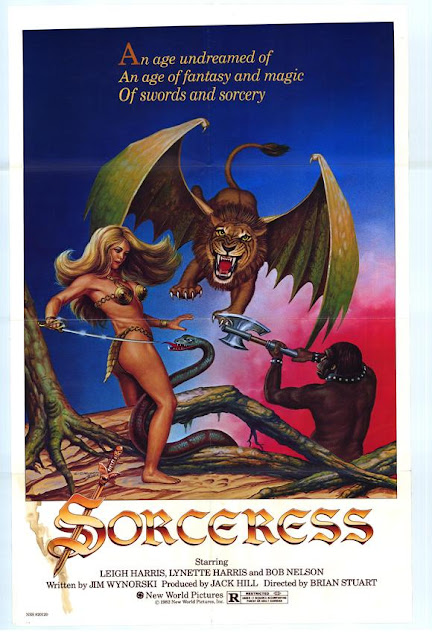 The gimmick is that the twins are like the Corsican Brothers in that what one feels the other also enjoys or endures. This comes quite handy when one sister is introduced to sex and we watch the other sister writhe as she also begins what it means to be a girl. There are few "special effects" toward the end, one featuring a lion with wings, which explains the other poster made for the movie. But it's exceedingly minor. There are "Monkey Men" who reminded me a lot of  "Chaka" from Land of the Lost. This movie has a barbarian or two (the best actor is a Viking-like chap) and a sorcerer and I guess a small role for a woman who might be deemed a sorceress, but really it's a mystery why this movie is titled what it is. This is not a good movie, but it's a funny one in spite of itself.
But it's got a great poster!
Rip Off
Posted by Rip Jagger at 4:00 AM