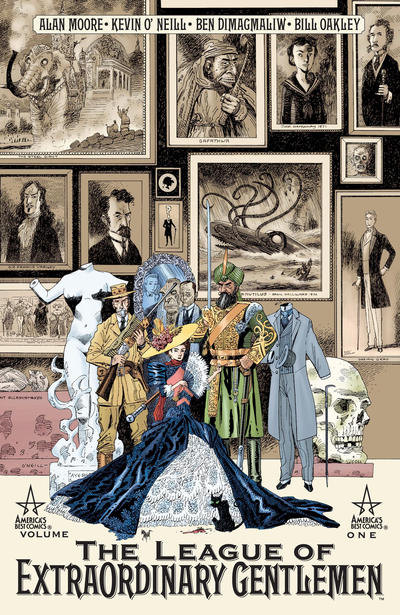 Someone says to you that they will write a story teaming up many famous and infamous characters of the 18th and 19th centuries in a sprawling grand adventure set in a never-never land of world history, and they are incredibly unpleasant to each other to boot. Sounds a little fishy but Alan Moore and Kevin O'Neill pulled it off when they gave the world The League of Extraordinary Gentlemen. The team is composed of a woman who has suffered a savage attack from forces of darkness, a famous white hunter who has become addicted to opium, a timid chap who changes into a man-eating monster, a murderous and lecherous fellow who cannot be seen, and a blood-thirsty pirate driven by revenge. This is a rollicking comic book tale with a stunning approach to grand old characters in that it gives them no respect whatsoever, they are forced to earn the reader's admiration all over again and some actually do. This title has been out over twenty years, so spoilers seem unnecessary but but tread carefully because I divulge secrets below. 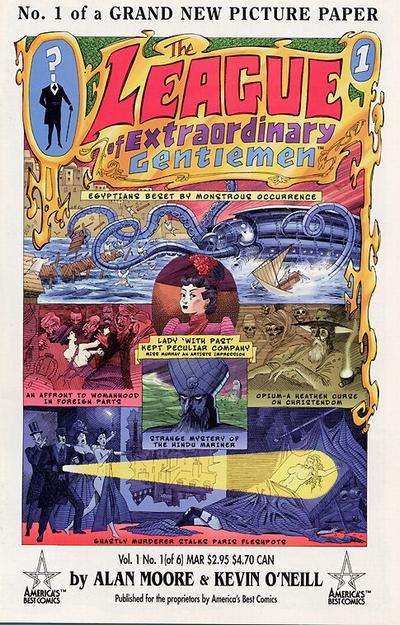 The story begins with Wilhemina (Mina) Murray (from Bram Stoker's Dracula) being given a mission by the mysterious and rotund Mr. Campion Bond on the behalf of his downright enigmatic boss known only as "M". Her mission to round up a bunch of bizarre men who will form a task force to operate on behalf of M. Her first stop is an opium den where she finds a dissolute Alan Quatermain (of She and other novels by H. Rider Haggard). Next she and a reluctant Quatermain are introduced to Captain Nemo (from Jules Vernes novels 20,000 Leagues Under the Sea and The Mysterious Island) and his enormous vessel the Nautilus which whisks them to Paris to discover another member, the savage Mr. Edward Hyde (Robert Louis Stevenson's creation from Dr. Jekyll and Mr. Hyde). 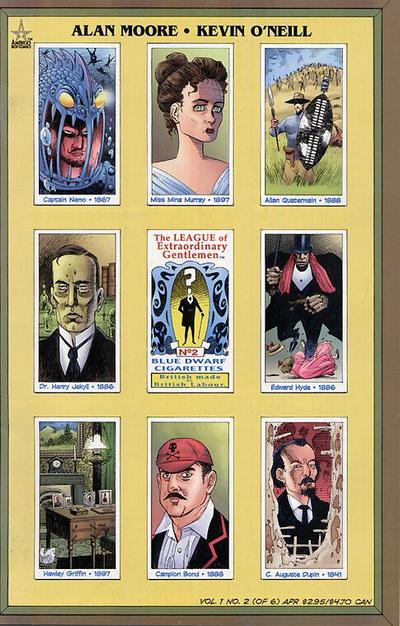 After capturing Hyde, who reverts to the meager Dr. Jekyll, the outfit returns to England to visit a girl's school where strange things are afoot. Girls are seemingly being impregnated by supernatural means, but it is shown it is in fact the transparent Hawley Griffin (from H.G. Well's novel The Invisible Man) who is doing the knocking up. 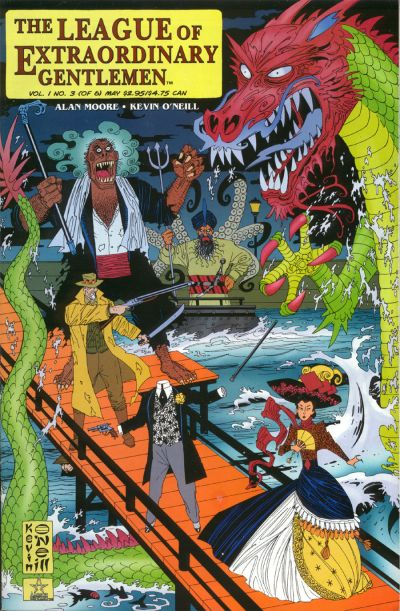 Fully assembled this "League" is given its mission, to track down and find some lost "Cavorite" (a mineral which defies gravity from Well's From the Earth to the Moon) that has fallen into the hands of an unnamed Asian villain called the "Devil Doctor" (Fu Manchu from many novels by Sax Rohmer). This villain plans to use the Cavorite to power an immense vehicle which give him power in London and elsewhere. 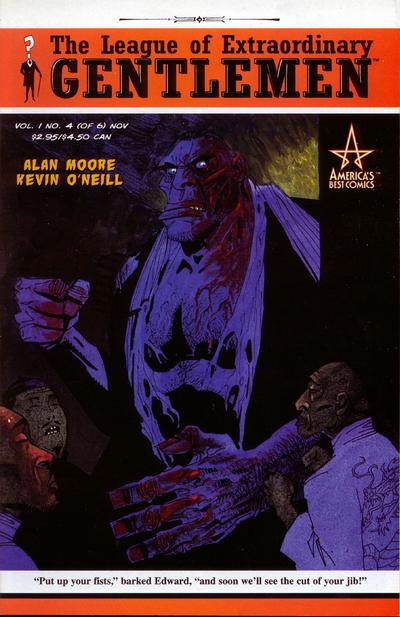 The League finds the Cavorite and after bloody and ferocious fighting liberate on the behalf of "M". The mysterious M is not Mycroft Holmes as Mina had surmised but the "Napolean of Crime", Professor James Moriarty (Arthur Conan Doyle's creation from his Sherlock Holmes canon). Moriarty wants the Cavorite for his own air vehicle to give him the power and aid him in his battle against the Devil Doctor. 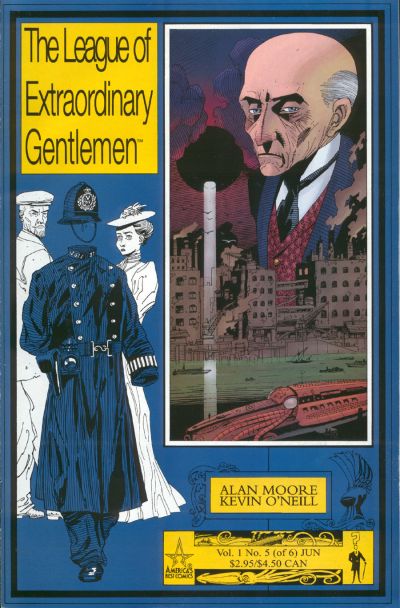 We learn how Moriarty survived the Reichenbach Falls incident and then we are treated to the details of his scheme. Also listening in was the invisible Griffen who savagely assumes a policeman's identity to travel across London to tell his colleagues. They realize the mistake they have made and prepare to battle Moriarty's forces in defense of London. The war between Moriarty's air forces and Fu Manchu's forces spills across the sky of London. The League uses a balloon to infiltrate Moriarty's ship and then proceed to bring down his forces, in a most brutal manner. Moriarty is defeated when clinging to the Cavorite he slips out of sight into the sky. The League is recognized for their valor by Mycroft Holmes who assumes Moriarty's position. They agree to stay together as the skiy is brightened by the harbinger of a Martian invasion. Also included in each issue of the six-issue run and combined in the rear of the collection is "Allan and the Sundered Veil". This is prequel of sorts for the League story in which Allan Quatermain is summoned to a remote estate and given a drug which causes him to slip out of sync with time. In this other world of timelessness, he encounters Randolph Carter (H.P. Lovecraft's supernatural hero) and Captain John Carter (the stalwart of many Mars stories by Edgar Rice Burroughs). The former is a seeker of weird mysteries and the latter a Civil War soldier who found himself for a time on the planet Mars. They are joined by a Time Traveler (from the Well's novel of the same name) who travels in a strange vehicle and end up fighting ferocious man-beasts in the future known as Mi-Go or Morlocks. Eventually they are stranded on a giant crystal of time and eventually return to their worlds. Quatermain is quite shattered by his adventure and seeks the solace of Opium where he will be discovered by Mina Murray. 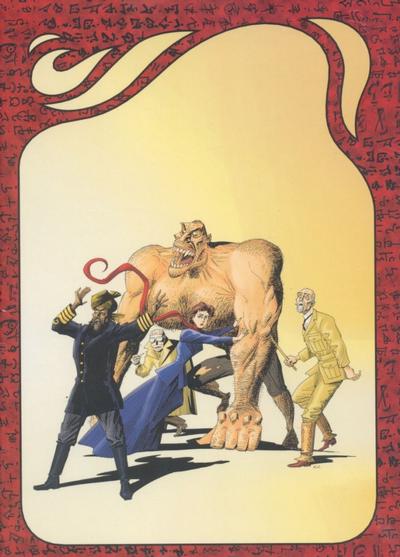 The League of Extraordinary Gentleman is a delightful brew of the familiar and the bizarre. Moore uses his encyclopedic knowledge of literature to feather the story with all sorts of references. Kevin O'Neill's bizarre but compelling treats these giants of literature with more vigor than respect, making them come alive all over again in this strange and wonderful tale. The story is a brutal one, and not for the faint of heart. It's filled with the whole panoply of passions people get up to, so the reader should be warned that this is not the calm and polite world in which these creatures usually inhabit. It's a raucous world filled enormous buildings and bewildering architecture of all sorts. It's a ton of fun and the best thing is that there is a second volume which to my mind is even better.
More on that tomorrow.
Rip Off
Posted by Rip Jagger at 12:00 AM
Labels: Alan Moore, Arthur Conan Doyle, Bram Stoker, DC Comics, H.G.Wells, H.Rider Haggard, Jules Verne, Kevin O'Neill, Robert Louis Stevenson, Sherlock Holmes