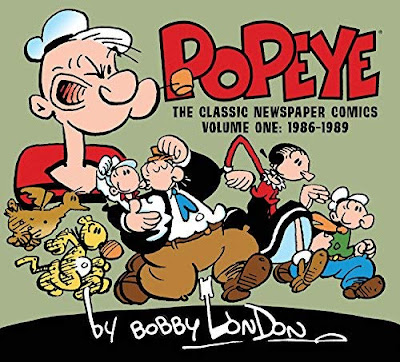 It seems that in 1986, in the full bloom of the second Reagan administration, King Features Syndicate was faced with dilemma. Who was going to draw the long-running and highly successful Thimble Theater Starring Popeye the Sailor Man comic strip. 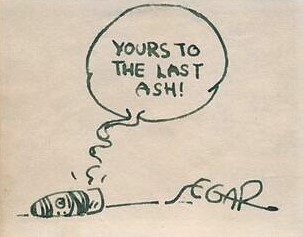 Of course Popeye had been introduced into the Thimble Theater ensemble in the early 1930's when FDR was attempting to stem the dread effects of a worldwide depression on a nation which was staggering after a decade or more of wine and song. In that environment a tough frisky and salty sailor who threw punches first and took names later if at all was a nice release from tense times. Popeye proved invulnerable both literally in the strip and outside where in the era that produced Mickey Mouse he was the most popular cartoon character in the world as well as a dominant figure in the funny pages. But at the height of the strip's success its creator E.C. Segar died. 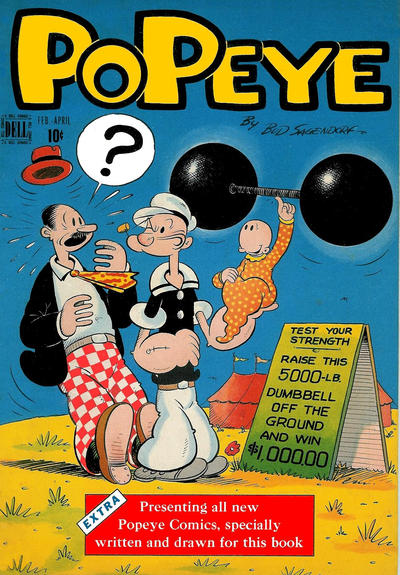 The strip soldiered on with Dick Winner and other assistants holding the fort. Bud Sagendorf was one assistant who helped expand the Popeye empire by making a successful foray into comic books with new stories for an up and coming medium. Eventually in 1959 Sagendorf took control of the comic strip as well and remained at the helm until age brought him to seek partial retirement in 1986. He'd keep doing the Sunday page, but the daily needed a new talent to take the helm. The choice was a sage one, but not an obvious one. 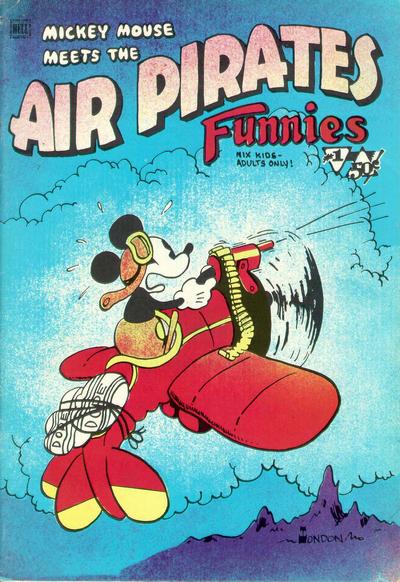 It begins with the aforementioned Mickey Mouse, a household name and powerhouse icon of the Walt Disney empire. Such potent symbols are ripe for satire but when cartoonist Bobby London took aim at the Mouse in the pages of Air Pirates Funnies it proved disastrous not only to London himself but to the very notion of satire and free speech. According to the courts the voice of freedom to mock was secondary to the power of the marketplace and a judgment was made against London which hobbled him for years. 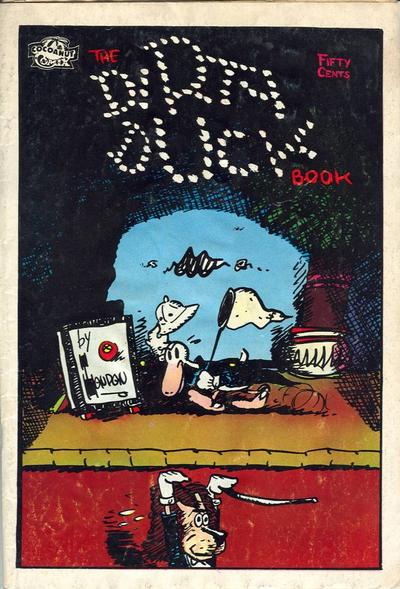 He kept cartooning of course. And it was one of his other creations named Dirty Duck that first introduced me to the talented and potent artist. I found dirty duck in the pages of National Lampoon in that magazine's comics section and for me reading London's Dirty Duck in Nat Lamp was like reading Don Martin in MAD, the first order of business whenever a new issue fell into my mitts.

King Features turned over Thimble Theater to Bobby London who ironically had found some success working for the "House of Mouse" in the intervening years. As one might've expected of the artist who had done Dirty Duck, the denizens of Sweethaven were in for some ruckus. Comic strips had changed since Segar's day as had the newspapers that transported them. Other mediums like television had diminished the newspaper's hold on the public mind and consequently the comic strip's hold on the public imagination. And economics had made comic strips get smaller and smaller as the need for brevity became necessary. The luxurious artwork of bygone eras was disappeared and the original creators were long gone. In their place were gag-a-day cartoons by the likes of Mort Walker and Bobby Hart, punchy jokes that hit and then evaporated. Continuities were gone save for a few adventure strips like The Phantom and Prince Valiant and soaps like Mary Worth. But London was about to change that. 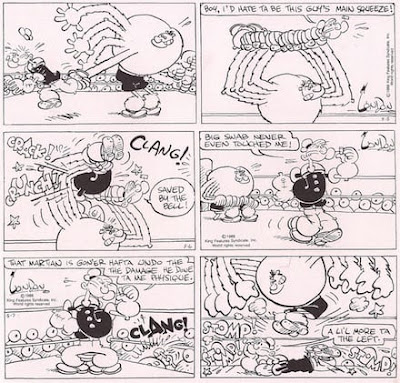 After a year or so, some of it anonymous, London slowly make the strip more strident and pointed taking on not general notions of human nature, but news of the day. The aforementioned Reagan administration came in for some comments here and there as well as the all-consuming consumer culture which seemed to define the era. Later still London returned continuing storylines to Thimble Theater as Segar had always done in the dailies and we saw the Sea Hag become not a vile sorceress but something more heinous, a soulless property speculator who was intent on turning Sweethaven into an enormous shopping mall and only Popeye stood up to her. Later Popeye gets ensnarled in a wrestling match with invading Martians and Wimpy imagines what life would be like married to Olive Oyl. In these early years it was Olive Oyl who really stands out as she tries to stand on her own two feet out of her parents's home and apart from Popeye. She ends up accidently creating a deadly coffee which the military want to use in South America and which later still as "Agent Olive" comes back to mutate all manner of things in Sweethaven itself. 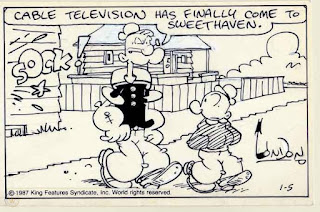 It's a raucous ride with London's take on the denizens of Thimble Theater and that's what E.C. Segar would've love I suspect. More next time as London's tenure comes crashing down.
Rip Off
Posted by Rip Jagger at 1:00 AM