The Secret History Of Marvel Comics! 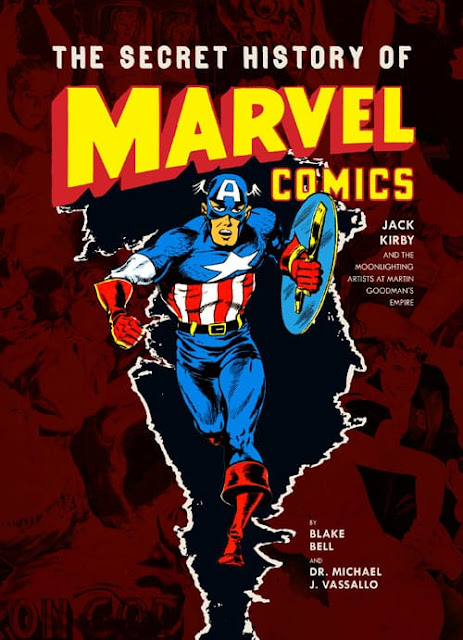 The Secret History of Marvel Comics by Dr. Michael Vassallo and Blake Bell is a remarkable tome utterly crammed with fascinating images by artists we all know and admire. The focus of the book though is one man -- Martin Goodman the publisher of Marvel Comics as well as it turns out nigh countless other brands. Much of comics history has been hagiography, but as the passage of time has allowed a more objective perspective to enter the game we see what was always just before out eyes. The early publishers of comics and the pulps before that were hucksters like as not and making a buck and a quick one at that was the goal. To that end we see in this biography of sorts how Martin Goodman shucked and jived his way through many a marginally legal (and sometimes outright illegal) business deal to make the most he could and pay his employees the least he might get away with. 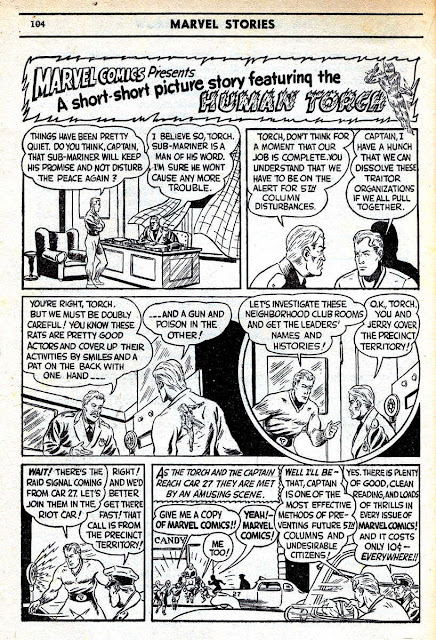 Goodman does not come off in this story as a good man, but he does come across as a full-blooded one. He's a man who made a lot of money ultimately, but as is shown time and again had the uncanny knack for missing out on even bigger opportunities just as the fruit was about to ripen. He's shown here as a man of small but focused ambitions and those compulsions didn't allow him to even apprehend a larger and more generous picture. He comes across as grasping, needlessly brutal at times and just plain cheap and chintzy. But there is always the suggestion that he was possessed of some sort of charm which drew in talents time and time again. In addition to the well-known Marvel, Atlas and Timely, the companies he oversaw were Leading, Vista, Canam, Zenith, Bard, Non-Pareil, Manvis, Animirth, Chipiden, Stadium, among many others. Little shell companies popped up monthly to play hob with finances. 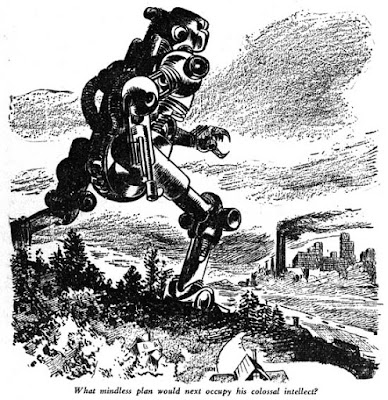 It's well documented that Goodman's sleazy accounting resulted in his losing Joe Simon and Jack Kirby when they weren't getting all they were owed from Captain America royalties. But that was just a single instance of Goodman shortchanging talent, the talent he relied on to make his bucks. He seemed to feel all of them were replaceable. Much is said about the earliest days of his pulps and to be honest that is the focus of this book. The simultaneous move into comics in the late 30's and early 40's is seen as just part of the whole of the Goodman publishing effort. He went on to actually sort of create what we think of as male "sweat magazines" and was not at all sky about publishing books that took full advantage of female pulchritude. True to form, Goodman sold Marvel just as it was on the verge of flowering into the dominant comic company of the era. His disastrous attempt to come back into the comics field in the middle 70's with Atlas-Seaboard followed the boom and bust model he'd perfected in his headiest days. 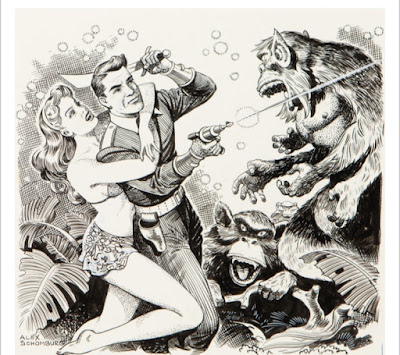 The story of Martin Goodman occupies just over one hundred pages of this book. The remainder of the pages, nearly another two hundred showcase the artwork of some of the giants who made Goodman's companies function. Here's a partial list of the famous Marvel talents given space: Jack Kirby, Joe Simon, Alex Schomburg, Bill Everett, Syd Shores, Carl Burgos, George Klein, Joe Maneely, Artie Simek, John Severin, and Gene Colan. Stan Lee himself is given several pages of his work. Kirby has the most with nearly forty pages of exotic pulp work exhibited. Other artist too get recognized, many not immediately known for working for Timely or Marvel. Here's a partial list: Frank R. Paul, Jack Binder, Dave Berg, Matt Baker, Roy Krenkel, Al Williamson, Stan Drake, Mort Walker, and Hank Ketchum. I haven't listed them all yet and most get several page. If you like pulp illustration this is an amazing book.
Rip Off
Posted by Rip Jagger at 1:00 AM