The Sunday Funnies - Me Li'l Sweepea! 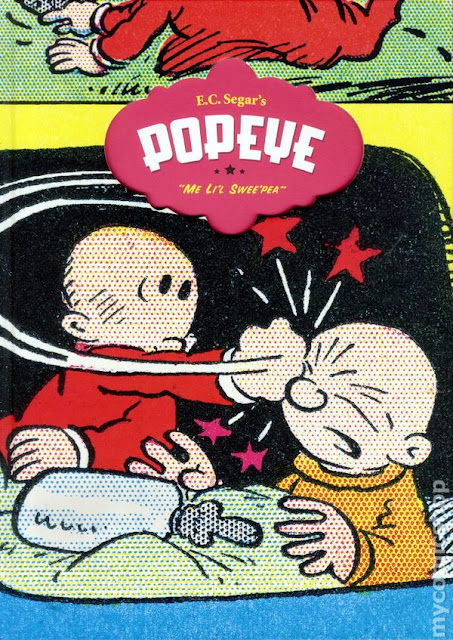 The sixth and final volume of the Fantagraphics collection of the classic E.C. Segar Popeye comic strips has some real surprises in it. Tragically Segar feel victim to leukemia as a relatively young man and so lost the chance to really demonstrate his talent for decades unlike some of his peers. He died when Popeye was at the height of its newspaper popularity and was restructuring the way in which the newspaper syndicates were going about getting revenues from their Sunday page draws. 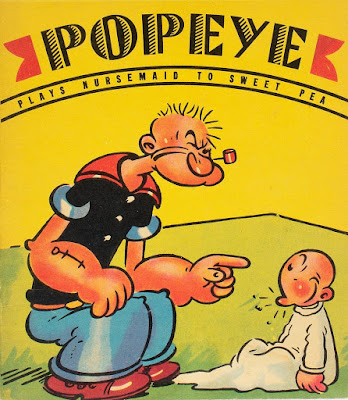 As you'd suspect from the title more than a few stories involve the mysterious tyke Popeye takes and raises as his own, the bizarre baby named only "Swee'Pea". But first there is the saga of the "Mystery Melody" in which an unknown female plays haunting music to lure Poopdeck Pappy. It turns out it's the Sea Hag and she turns her attentions on Wimpy for some reason. Afterwards Popeye becomes invested in saving a starving young woman named "Susan". He becomes rather obsessed with seeing to her welfare and ultimately finds her home and makes sure that she is no longer being swindled. It's a touching sequence at times and alas a creepy one at times as well. Then Poopdeck Pappy gets involved with the court system when he tries to sow some wild oats. Then the secret of Swee'Pea is revealed when a man shows up and says the little kid is royalty, the king of "Demonia". Popeye and the gang tag along and help this new monarch deal with arranged marriages and mysterious demons under the ground. It's this storyline that Segar was unable to finish and it's where we leave to visit the Sunday pages.

As usual the Sunday page cannot seem to pass up yet one more gag about Wimpy the mooch trying to finagle a free hamburger at Rough-House's diner. Interspersed with those are some tales of Toar, the fantastically strong caveman and loyal friend of Popeye, a long sequence where Popeye must battle against a boxer named "Kid Mustard" who alas also eats spinach to enhance his strength. In this color arena Swee'Pea gets the spotlight again as this time his mother returns to take him back but he runs aways and we follow him on his journey back to the swollen arms of his beloved Popeye. Poopdecak Pappy is a little spry and shaves off his beard to pitch woo to Olive who is convinced that Popeye has finally popped the question. And that's about where we leave it when Segar passed away.
"Sappo" is back to its old basics after many months as a mere visual gag, with Sappo, his wife, and Professor Wottasnozzle heading into deep space and visiting a range of oddball planets in our solar system. Wottasnozzle always dreams up a device that will not only capture but freeze actual dreams and that causes a bit of ruckus in the Sappo home when it turns out they dont' dream about each other. All in all a very nifty batch of misadventures. 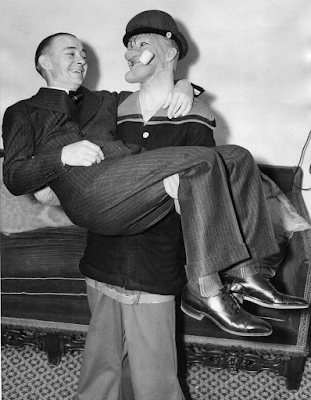 Because Segar tragically died, there is little evidence of any drop off in quality, it was good right up to the end, at least for him. As we well known Popeye thrived long after his creator's demise and while the comic strip had many a high and low over the decades, it would offer some surprises. Among those was a very topical and evocative run by Bobby London in the late 1980's. Next time the Dojo focuses on those.
Rip Off
Posted by Rip Jagger at 1:00 AM