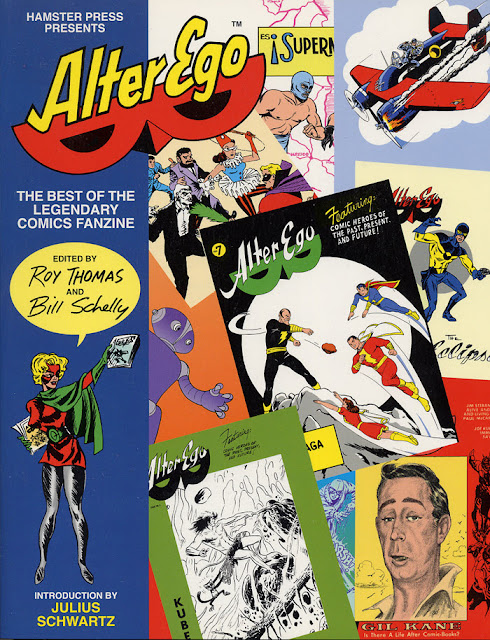 We live in interesting times when it comes to being a fan of anything. If you fancy a particular style of storytelling or a particular kind of music or a particular brand of films it's not only easy to get access to avalanches of information about your chosen interest, but it is in fact difficult to get out of the way of tsunamis of data that wash over you before you know it. Getting spoiled about some upcoming project is so easy it requires real dedication and focused effort to keep from it. It's a far different world than existed in the early 1960's when comic books and in particular superhero comic books began to regain some of the footing and success of a few decades past during WWII. It was a time when comic books were seen as much as plague as an investment and few and far between were the dedicated fans who harbored an abiding affection for the masked marvels of an earlier age. It was a time ripe for a fanzine called Alter Ego. 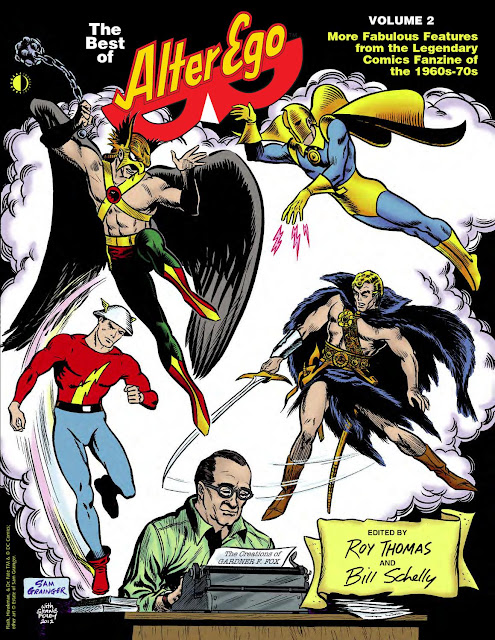 Alter Ego was the invention of  Dr. Jerry Bails, a professor of science and a comics fan from Missouri with a passion for collecting and collating data, especially data about his favorite superhero team the Justice Society of America. He exchanged letters with Julius Schwartz, editor at DC Comics who was in the process of reviving the old Golden Age masked men and reshaping them for a modern post-nuclear American audience of kids and others eager to read about heroes again. These letters both informed and provoked both men and they became friends of a sort and eventually it occurred to Bails that he might like to discover and communicate with likeminded fans and how best to do that but get some addresses of same and begin a little newsletter about the subject. That turned into Alter Ego, a humble mimeographed publication which used both erudite understanding and humor to find a ready audience. The humor came from an unsettled Missouri teacher of English named Roy Thomas who had in his spare time concocted a zany parody of the shiny new Justice League of America called "The Bestest League of America". They graced the cover of the first issue of Alter Ego and were included in the first three issues in a continuing story. 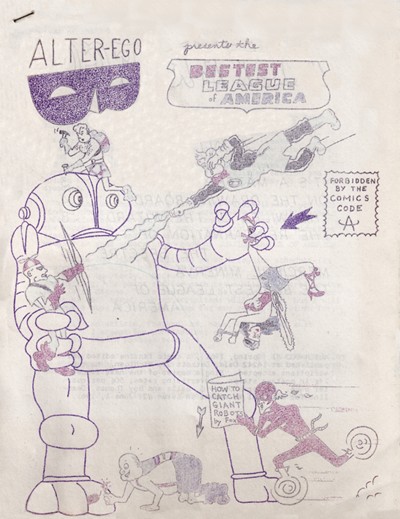 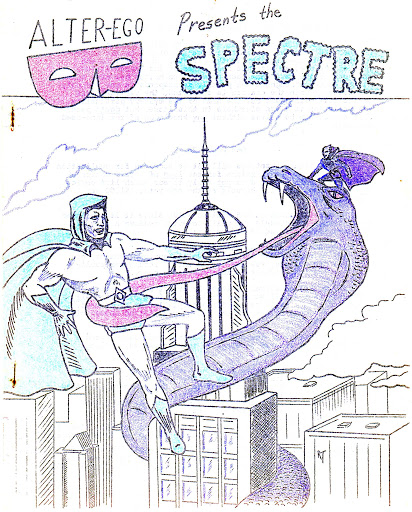 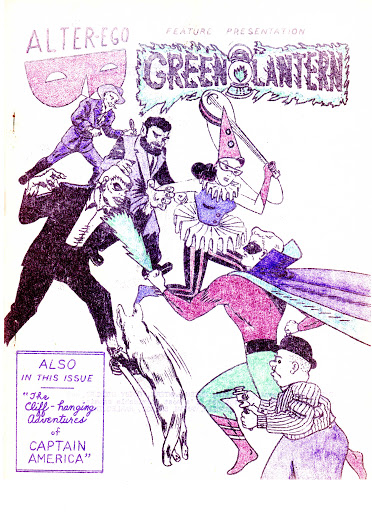 The first three Alter Ego issues, the one produced on spirit duplicating machines all appear in 1961 and their make up was pretty standard for fanzines that wanted to motivate fan interaction and also advertise and promote new publications from the likes of DC mostly but eventually Marvel as well. The Golden Age focus of Jerry Bails is evident in these seminal issues as he writes about a vintage JSA villain the Wizard as well as the Golden Age Green Lantern. Roy Thomas offers up his trio of "Bestest League of America" spoofs which rip on the burgeoning Silver Age revival at DC as well as writing new fiction starring The Spectre. Creating buzz for heroes they wanted to see revived such as the Spectre and the Atom feels a mainstay focus of the early Alter Egos. There are letters from the likes of Steve Gerber, Ted White, Don Thomposon and others. To read the "Bestest League of America" trilogy check out this odd link. 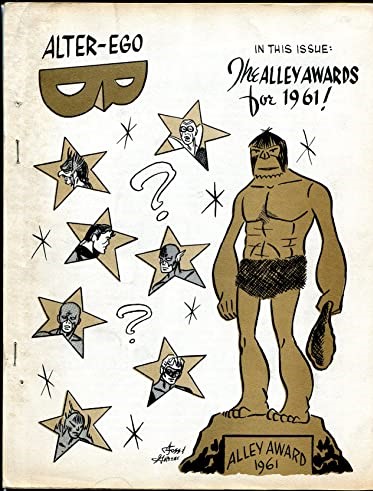 It is almost a year later in 1962 when the fourth and final Jerry Bails issue of Alter Ego, this done on photo-offset, hits the grubby hands of the subscribers. And in it Bails announces his departure and that a team called "The Triad" will be taking over. (More on them in a moment.) This issue also features the first Alley Awards, a selection of the best that comic books had to offer the superhero fans and as one might expect in this early era, DC mopped up the competition. Bails offers up a detailed look at the MLJ heroes and Roy Thomas describes the elaborate electoral process for the Alleys (which were actual fragile figurines of the famous comic strip cave man no less). Paul Reinman contributes a piece talking about his process and his studio and there's art from Jack "King" Kirby. The fanzines have been noticed and some pros see value in helping this fledgling group along their way. 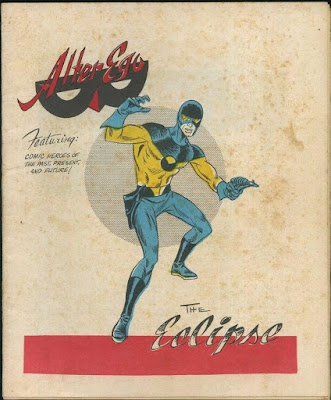 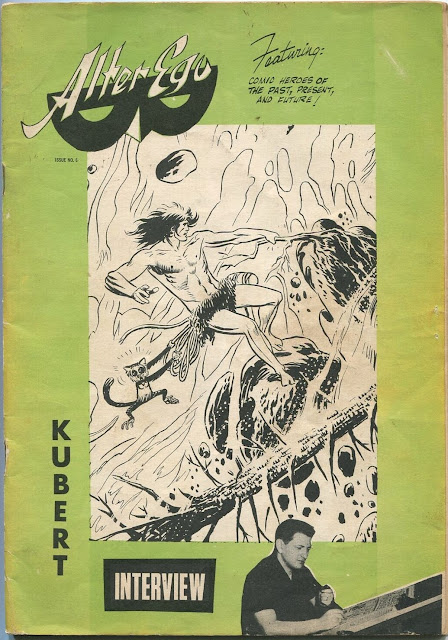 The fifth and sixth issues of Alter Ego take a tremendous leap forward in their visual quality when they finally arrive in 1963 and 1964 respectively. "The Triad" had been fan artist Ronn Foss, his wife Myra and artist Richard "Grass' Green. Sadly the latter two fell away after great hopes and Foss fended pretty much alone as publisher but with much help from Green as an artist and Biljo White another fine fan artist. Foss brought his creation "The Eclipse" to the pages of Alter Ego and these are delightful superhero yarns in a slick style which was almost professional about a hero who was an updated Dr.Mid-Nite (Foss couldn't get DC to let actually do Mid-Nite) who can walk through walls in shadow. There are professional contributions in theses issues by Carmine Infantino, Curt Swan, Russ Manning, and Steve Ditko as well as an interview with artwork with Joe Kubert. Articles range from how to build a worthwhile collection (of mostly Golden Age stuff) and about the movie serials by Ron Haydock (a rockabilly singer and partime actor as well -- Rat Pfink anyone?). More Alley Award results finally come in and the Fantastic Four are starting to point the way to the future. The Bestest League returns but this time drawn by "Grass" Green and the team meets the "Frantic Four". 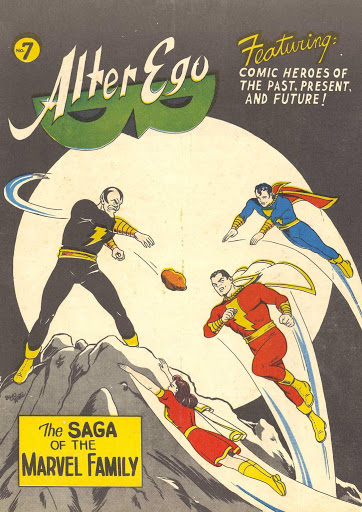 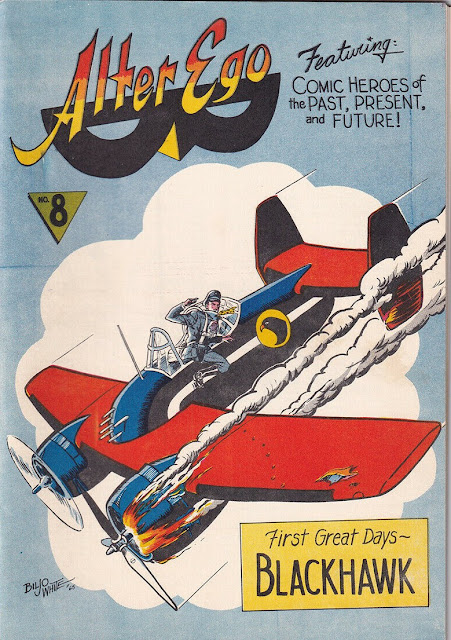 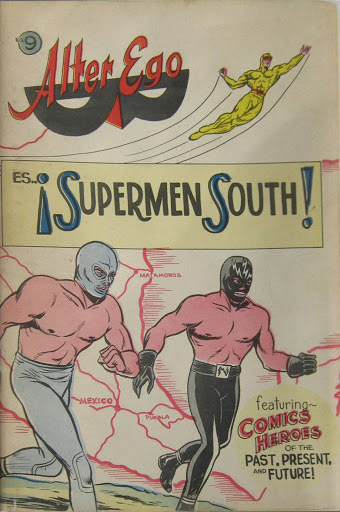 Roy Thomas takes up the reins after Foss has to move on and Roy gets together three issues in late 1964 and through 1965. These are mature fanzines with good artwork and even a titular superhero yarn titled "Alter and Captain Ego" by Biljo White. This is a Captain Marvel variant and the first issue of the three focuses like a laser on the Fawcett Marvel Family with articles by Roy and some tremendous contributions from Captain Marvel writer Otto Binder. The next issue takes a gander at the Blackhawks as well as a long two-part article on Mexican comics and some of the original superheroes from below the border. Ron Foss is back with more Eclipse and there is even some promise of an adaptation of Gardner Fox's Warrior of Llarn, though that doesn't actually make print until Bill Schelly rescued it decades later. some of the gems are actual pages from Otto Binder about unpublished Captain Marvel stories and some comic strips by him and C.C. Beck starring the talking tiger "Mr.Tawny". More pro contributions by Steve Ditko help make these remarkable zines of the time. After these three issues though Alter Ego goes dark for some time and for a simple reason. Roy Thomas becomes a professional writer, first at Charlton and then briefly at DC before landing at Marvel where he becomes a major architect alongside Stan and the rest of the Bullpen. He wants to do more Alter Ego issues but it doesn't happen until 1969 and by then its a prozine through and through. 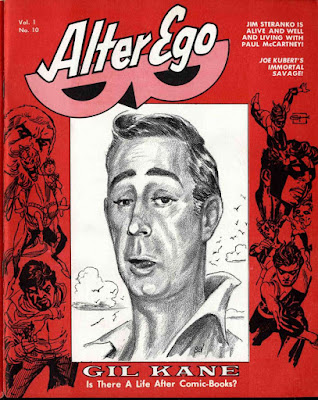 Alter Ego ten is an issue I remember being advertised in the comics of the day. With support from professionals like Roy Thomas, Sol Brodsky, and Marie Severin (she did the portrait), it 's no wonder this is a fondly remembered magazine. It features perhaps the finest piece Alter Ego ever produced in its nascent incarnation, and that's an amazing interview with sometimes maverick artist Gil "Sugar Lips" Kane. Kane was a mainstay at DC and then he turns up at Marvel and was making an impression there, but like Jack Kirby and others wanted to take comics into new formats. He was in the process of making his magazine Kane...His Name is Savage when he did the interview that both enlightens fans and fired up a few pros. It's insightful and provocative and if you haven't been convinced you need this reprint collection before now, then this interview is almost worth the price alone. There is also material from Joe Kubert, unseen Tor pages and Tor even makes the back cover. One of the funniest articles in the issue (or any) is delightful piece by Roy Thomas in which he attempts to explain the Trina Robbins theory that Jim Steranko died after SHIELD #3 and that a doppleganger was responsible for the work thereafter, a doppleganger by the name of Paul McCartney. 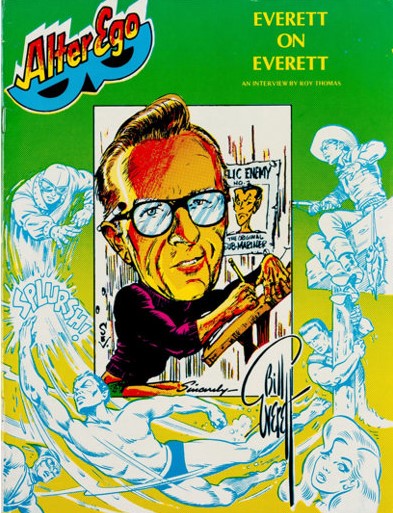 And that's it for Alter Ego until almost a decade later in 1978 when finally Mike Friedrich, at the time publisher of Star*Reach, a groundbreaking independent comic, sought and got permission to publish the elements that were to have been the eleventh issue which focused on artist Bill Everett and had a lengthy interview done by Roy Thomas as well as a remembrance of the artist who died too young in the early 70's. This issue also features an interview the Moebius and at that time he was among the most avant garde of artists in the field. 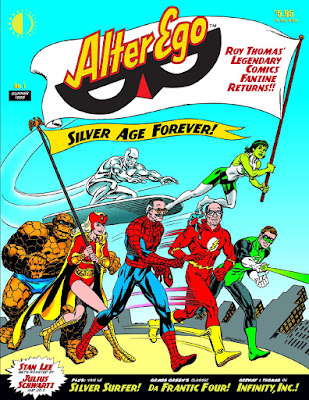 And that's that for Alter Ego until decades later in the later 1990's still Roy Thomas dusts off the title and brings it to Twomorrows Publications where it finds a home it has enjoyed ever since. I've rarely missed an issue and never because I wanted to. I don't get through all of them but I enjoy almost all that I do get around to. The magazine has done a fine job of documenting a generation of talents who have all but left this world and left comics and comics history to younger hands.  For an amazing issue by issue breakdown of the contents of the Alter Ego issues check out this link.
Next week --more Alter Ego.
Rip Off
Posted by Rip Jagger at 1:00 AM