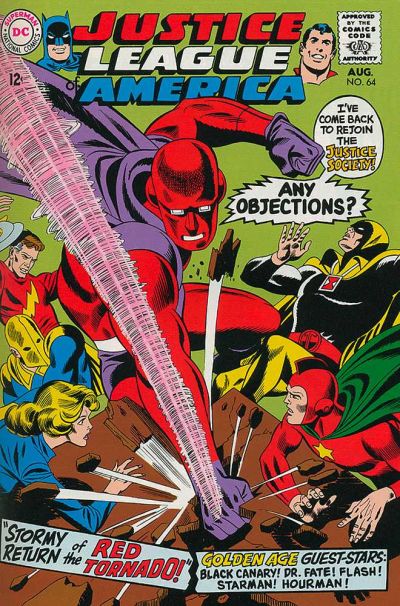 1968 was the year I began my first hand experience with the classic Justice League-Justice Society crossovers. I tumbled into comics gathering from all sources before becoming a Marvel Zombie for a few years. My very first Justice League comic was JLofA #64 featuring the debut of the Red Tornado and signaling the end of an era in the League. This was Gardner Fox's last crossover script, the guy who started it all was done with Earth-2...almost. More on that later. 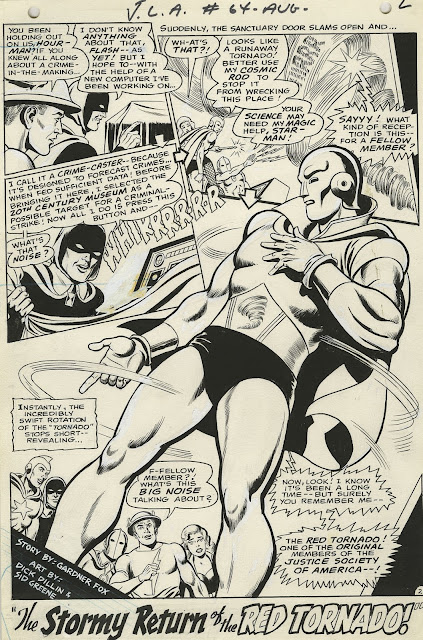 "The Stormy Return of the Red Tornado!" by Gardner Fox features the artwork of new Justice League artist Dick Dillin, moving over from DC's long-running Blackhawk title. Sid Greene remains on the inks. Outgoing JLofA artist Mike Sekowsky and Joe Giella are credited with the cover artwork. This story begins on Earth-2 with the JSofA being bored by a lack of crime. Hourman unveils his Crime-Caster, a computer to predict crime, when suddenly the Red Tornado appears announcing his return to the team. The Society is non-plussed since the Red Tornado they knew was a large woman in a homemade costume who bumbled through only one JSofA adventure. Tornado insists he's the real McCoy nonetheless despite revealing he has no face at all. He does however have detailed information on the Society's secret identities. They are debating the situation when the Crime-Caster predicts a robbery at the 20th Century Museum. Dr.Fate, Black Canary, Hourman, Starman, Flash and the Red Tornado race to the crime to find faceless villains doing the deed. The battle is rough and tumble with the Tornado attempting to help but invariably his actions result in the seeming deaths of each of the JSofA members. Only Dr.Fate survives along with the Tornado. The villain of the piece is revealed as T.O.Morrow an Earth-1 villain who has used future weapons and a prophetic computer to commit his crimes. It is revealed that he created the Tornado to infiltrate and defeat the Society despite the Tornado's lack of complicity. The Tornado chases Morrow down, but is defeated himself. Meanwhile Dr.Fate gathers more Society members (Mr.Terrific, Sandman, Atom, Green Lantern, Dr.Mid-Nite, and Hawkman) to stall a further attack by Morrow on the Island of Atlantis. Red Tornado seems already to be on site and fighting the villains, and defeating Morrow. But when the JSofA arrives Tornado mishandles a weapon discharging radiation which again seemingly "kills" the remaining members of the Society along with the Tornado himself. The comic ends with T.O. Morrow vowing to go to Earth-1 to continue his crime spree knowing from his prophetic computer that he can only be defeated if the Tornado appears, but since Red Tornado is "dead" he's supremely confident. 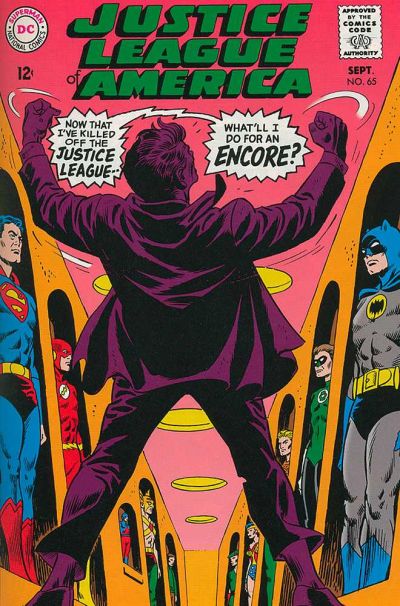 "T.O.Morrow Kills The Justice League--Today!" again features the talents of Fox, Dillin and Greene, with Dillin delivering his first cover. The League is assembled when five of the members' romantic interests arrive to give them lethal kisses before vanishing. The members who are "killed" are Snapper Carr, Wonder Woman, Atom, Hawkman, and Aquaman. The remaining Leaguers are warned of the attack of three mythical monsters, an orange dragon, a yellow griffin, and a purple harpy. Superman, Batman, Green Lantern, Flash, and Green Arrow face off against this threat and win but then have to face in the Secret Santuary itself former villains. Amazo, a Diamond Creature, Doctor Light, Super-Duper, and Starro all battle the remaining Leaguers and "kill" them. The defeated and presumably deceased Justice League is then arranged in alcoves so that Morrow can gloat over his victory. Meanwhile on Earth-2 the Red Tornado recovers, heads to Earth-1 and uncovers Morrow's plot. He then arranges for the real loves of the five originally stricken League members to come and give each a "Kiss of Life" to undo the "Kisses of Death". The Leaguers revive and attack Morrow's forces again as he plots to pit the twin Earths into a war with each other. Morrow is defeated, the remianing League members are revived and Red Tornado returns to Earth-2 to revive all of the seemingly dead Justice Society members who then induct the Tornado officially into their ranks. The story ends with Tornado wondering about what this new life will mean for him. 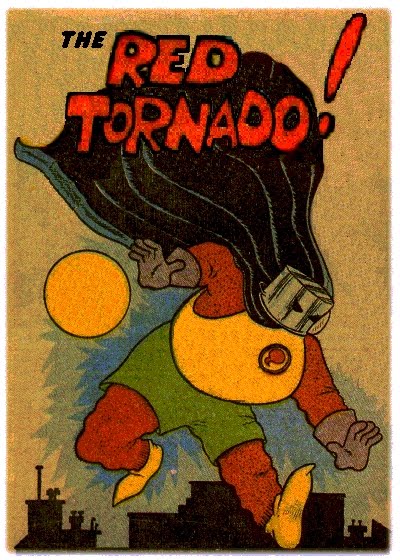 Original Red Tornado by Sheldon Mayer
So this is the story that introduced me to the Justice League. Did you notice what was missing from the first half of this story. Yep, there is no Justice League. The JLofA is absolutely missing from their own comic book completely. Not a single panel depicts the League in any way. The second half is all about the League of course with only Red Tornado making the trip between Earths. So this is a crossover of a very different kind. It's not much about the nature of Earths One and Two at all, since those concepts seem completely settled now, but it's purely about developing a single character, reviving yet another classic name from DC's Golden Age. It's also a whopping good action tale with tons of battle by all concerned. There is a wild and fanciful quality to the story, but it doesn't reach the near-absurdist qualities of the past two crossovers. This is a straight forward superhero action tale, albeit with loads of characters and concepts. And guess what, as a novice DC and Justice League reader I wasn't confused, not even a little bit. Gardner Fox was a master of explaining everything, and even in this densely plotted two-parter with twenty-one heroes, I never got lost. I bring that up because the confusion of readers was one of the canards that DC editorial always threw out to justify the revisionist Crisis on Infinite Earths. They would say that readers needed a clearer platform to build on. That's rubbish. Each story succeeds or fails on its own, and the complexity of the world it operates in has nothing to do with it. It's a creator's job to explain things so a reader won't get lost. Gardner Fox did that better than anyone. His supple hand on these stories will be missed. But as I said, we are not quite done with Mr.Fox quite yet. 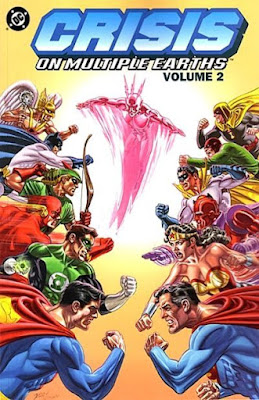 More next time.
Rip Off
Posted by Rip Jagger at 1:00 AM