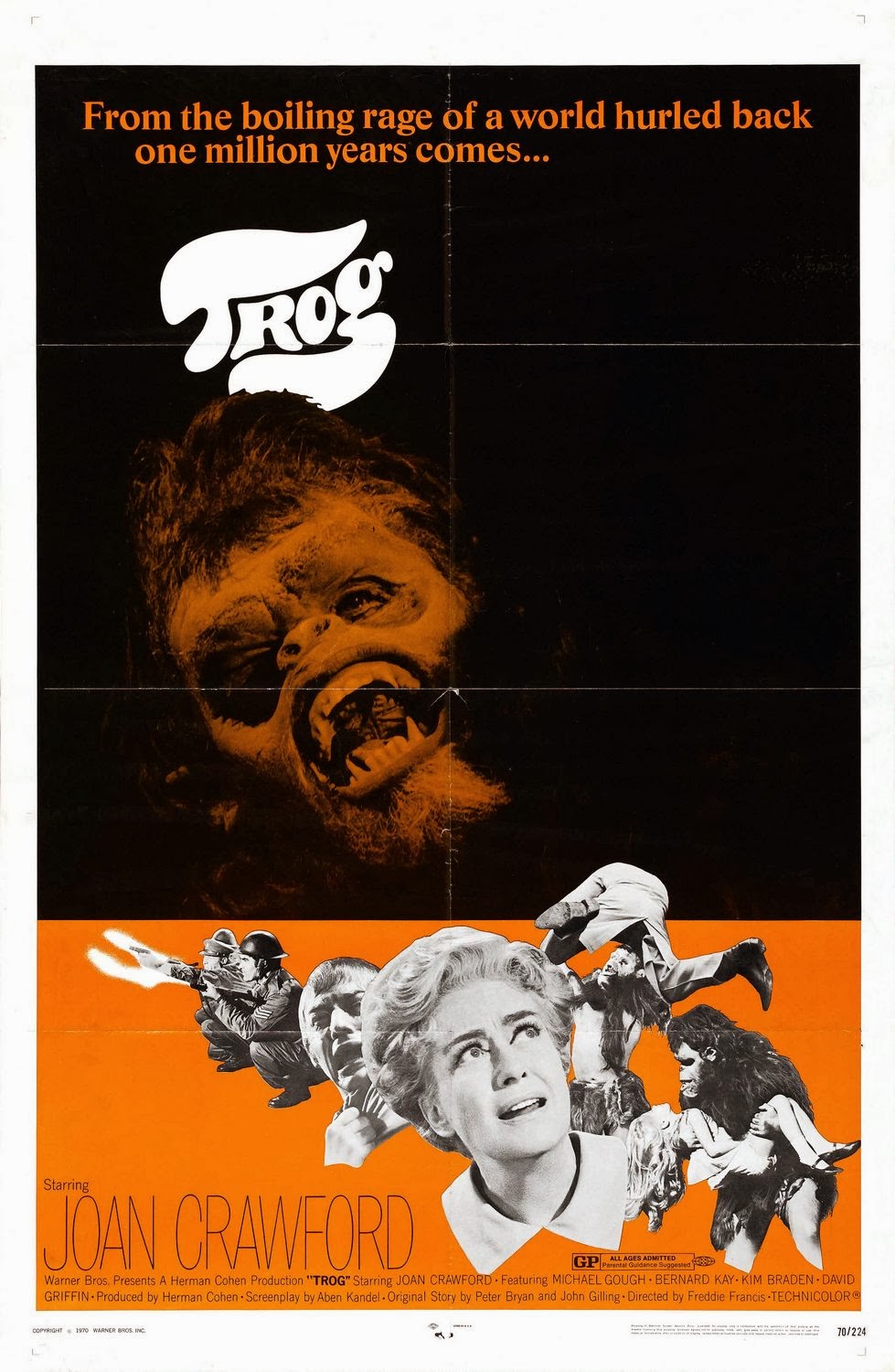 One of my guilty cinema pleasures is Trog.  I've referenced it a few times here and here, but never properly reviewed it. After just seeing again on TCM, I'm filled with This delightfully offbeat 1970 flick is the story of a lonely cave dweller (a "Troglogdyte") who after thousands of years trapped in suspended animation in a glacier comes back to life stranded in a cave only to be discovered by some hapless spelunkers one of whom he promptly kills. It is the heart-wrenching tale of a creature thrust into the modern world against his will and who seeks only some connection with another intelligent being so appease his aching loneliness.

Sounds like a pretty good movie, and it is a lot of fun, but most folks would not categorize Trog as a "good movie". If so then only in the so-bad-it's-good zone. What weighs down this movie almost from the beginning is a lack of funds, though I for one am impressed at the quality of what does get onto the screen. There was apparently little money for special effects, so the make-up on Joe Cornelius, the actor who portrays the forlorn caveman, is pretty wretched when seen from certain angles. But then I think it's pretty decent when seen from others.

The movie is also famous as the last leading part for Silver Screen legend Joan Crawford, who is a mighty trooper in this flick. I always admire actors who act, in whatever capacity and in whatever vehicle, and I try not to hold the quality of a movie against them when it's clear they had little control over anything other than their own part. Crawford here ruggedly pushes through the story, but due to limited funds was forced to use her own wardrobe for the part which creates some distracting color combos in some delicate scenes.

But let me say more about what goes on in this one. I divide Trog into three parts: the Discovery, the Domestication, and the Destruction. Follow me please as we work our way through this epic tale of love and war across the millennium. 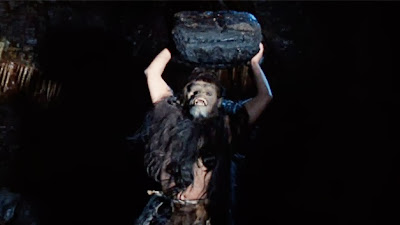 The DISCOVERY: This is perhaps my favorite part of the movie. Freddie Francis, the director does a wonderful job as we follow three hale and hearty cave explorers as they find and plumb the depths of a new opening they chance upon. It takes stout hearts to squeeze their way down into the first chamber and even then they must strip and enter dark and freezing water to find the isolated chamber which holds a deadly secret. Two of the three brave the depths, crossing over into an "undiscovered country" which sadly results in one of them ending up dead and the other mad. They find Trog, a caveman who has apparently just awakened after eons of pleasant suspended animated slumber. Enter Dr. Brockton  (Joan Crawford), a local primate specialist who immediately wishes to see the creature for herself and convinces the lone healthy survivor of the original trio to show her the way. How she got into the cave is anyone's guess, but the movie conveniently skips that indignity. Brockton snaps a photo of Trog which unleashes an avalanche of publicity and raw fear. The townspeople converge on the dark maw into the Earth's underworld and set up police cordons and TV cameras to simultaneously limit and probe the mystery. Men are sent down but there is more death and the TV crews beat a hasty retreat as Trog emerges into the sun for the first time in ages only to fall victim himself to Brockton's tranquilizer gun. 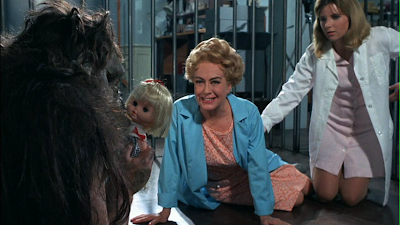 The DOMESTICATION: Trog is then shunted into a cage and is chained to the floor as Brockton attempts to communicate and apparently train him in the ways of the modern world. This is some of the most hilarious stuff in the flick as the  tests they put poor Trog through seem downright weird and lack any sense of scientific rigor that I can detect. Brockton's daughter Ann is front and center in this training as is Malcolm, the handsome survivor of the original trio of spelunkers. Anne, a lovely blonde seems to be of particular interest to Trog, following a long cinematic tradition begun with the mighty Kong no less. Trog is confronted with a nest of modern toys and they even try to teach him his colors at one point. He doesn't seem to know blue, likes green, and but gets violent when he sees red. They teach him literally to fetch, but that brings him into conflict with a local dog which sadly he kills. All the time that this is going on a local townsman named Sam Murdock (Michael Gough at his scene-chewing best) is simultaneously fearful and hateful of Trog and wants him destroyed. Murdock seems a thoroughly awful man and aside from some assumed self-loathing it's a bit hard to determine what motivates him save perhaps for a fear of science and the modern world. Also on hand is a Dr.Selbourne who works for Brockton but out of jealousy turns against her at a hearing and gets canned. A bunch of learned folk descend on the Brockton Institute to observe Trog and promptly operate on him inserting all sorts of gear, some of which allows him to speak briefly. It's during this phase that the single stupidest thing in the movie occurs, the "scientists" show Trog skeletons of dinosaurs which they assume will trigger his memory. Even a reasonably intelligent schoolboy knows this is now proper prehistory, but nonetheless they proceed. This does oddly trigger a "memory" in Trog which we get to see, and it's really some stop-motion dinosaurs battling it out by way of another movie by Irwin Allen titled The Animal World. 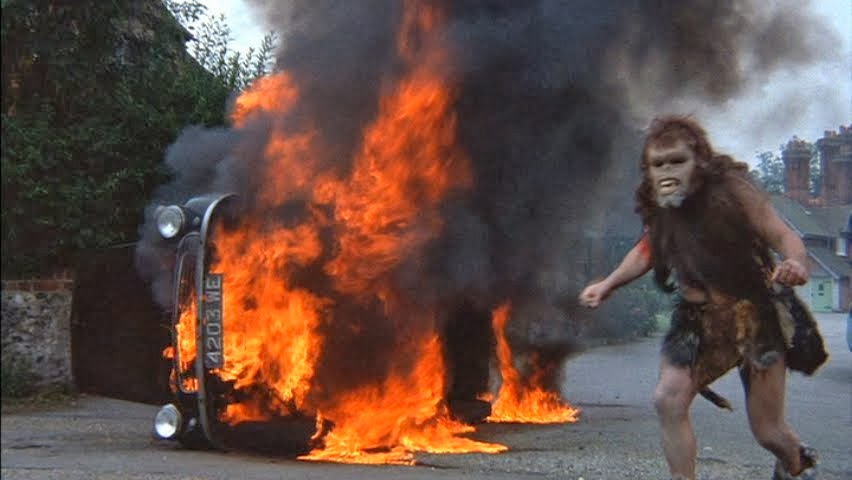 The DESTRUCTION: After all this Murdock fears that Trog will be allowed to live, so he goes to institute, attacks a policeman, and frees Trog who promptly and quite properly kill him. On the loose now, Trog seem to find an alternately alarmed and tranquil village where he encounters a grocer and a butcher. He dispatches both, the butcher in an especially hideous manner. He encounters a car which he attacks and turns over and which then inexplicably blows up. He stumbles onto the playground (like I said, the alarm seems to not have spread to the whole town despite the many klaxons blaring from time to time) and kidnaps a lovely blonde girl who I think might actually be the daughter of the awful Murdock. He takes her back to his cave. The TV cameras and townspeople return to the cave, this time with the military to boot. They are plotting ways to get to Trog to kill him, but Brockton against orders descends and rescues the girl, appealing to Trog's gentler nature. Sadly when she returns topside, the army descends in mass and Trog is killed in a brutal wave of gunfire, which causes the caveman to fall impaling himself on a pointy stalagmite. Brockton walks away in utter sadness. 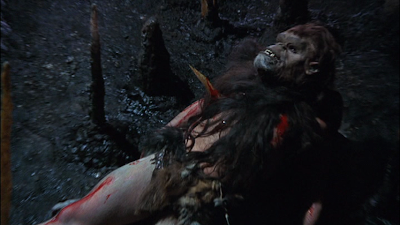 So as you can see there is quite a lot going on in this notorious movie. It's a film put together by and featuring professionals. The editing is crisp if obvious (track Crawford's pantsuits and you can almost figure out the shooting schedule) and the acting is broad, but done with proper conviction. There is not hint by those involved that they are in an embarrassing movie. There is only diligent attention to detail and craft, the mark of any worthy effort. For that I admire Trog; for all its weaknesses as a film, it does what it's supposed to do, entertain. It properly transports the viewer to another world and time, not unlike its hapless star Trog himself. The fact that the movie is unintentionally goofy is not what is primarily important. The movie and the participants take themselves seriously and that's sufficient even though we as audience far removed from that time can find all manner of fun with the production. 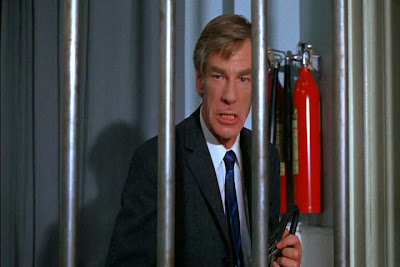 Find and watch Trog, enjoy it. Don't hate it for what it is not. Lets' not make the same mistake with this delightful flick that the hateful Murdock did with Trog, let's appreciate this wild and brazen creation for what it is.