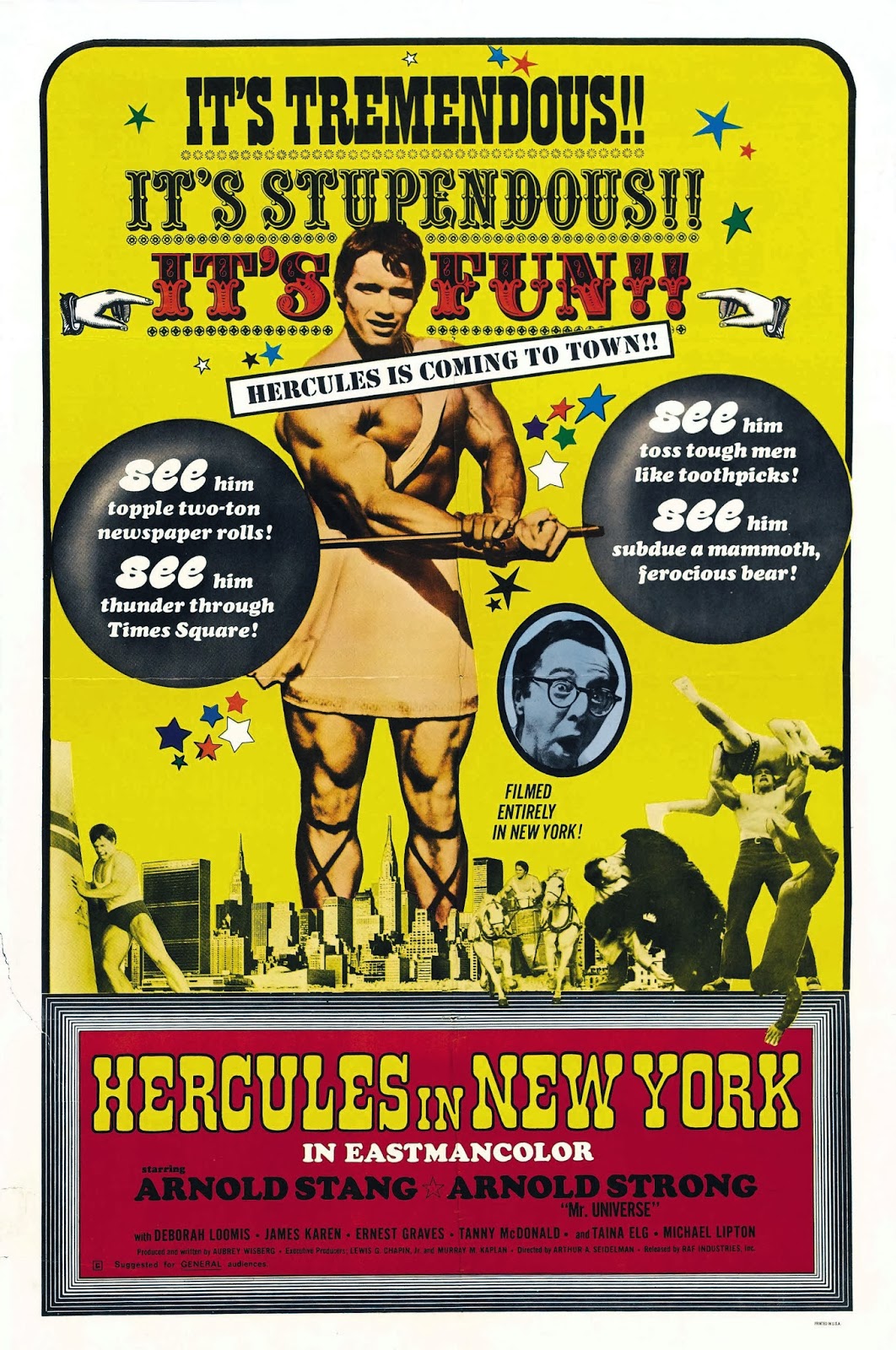 Hercules in New York is one of the legendarily awful movies ever! If ever a movie defined the notion that a movie could be so bad it's good, it's this one. The incompetence is not such that you lose the plot thread (such as there is) or cannot hear the "dialogue", or some other technical blunder. It's a movie that seems to have enough professionals involved that it functions as a movie in the traditional way, but it's lead by an actor so grossly horrible that it's stunning to watch other, competent actors try and hold their scenes with him.

Arnold Schwarzenegger has become a cultural icon in American life, with an eventually successful film career, a successful sports career,  a successful political career, and a titillating hobby of carousing which might make Errol Flynn blush. He's an old man now, to some degree broken in the box office and in the popular imagination, but this movie finds him in the flower of his youth, smooth skinned, muscled, and stranded on screen with a perpetual dim-witted glower on his gap-toothed mug.

The movie offers up Arnold, called "Arnold Strong" in this film and dubbed in versions I've seen before. He plays a youthful and headstrong Hercules who defies his father Zeus and comes to Earth to discover what he can about life in the "Big Apple". He stumbles along and hooks up with Pretzie (played by comedic actor Arnold Stang, the visual inspiration for Joe Staton's Mike Mauser) who guides him a bit into a career as a professional wrestler. They run afoul of some gangsters but not before meeting a professor and his comely daughter. Other gods appear such as Mercury and Pluto and Nemesis, but mostly it's Arnold as the especially dopey Hercules who dominates the screen. 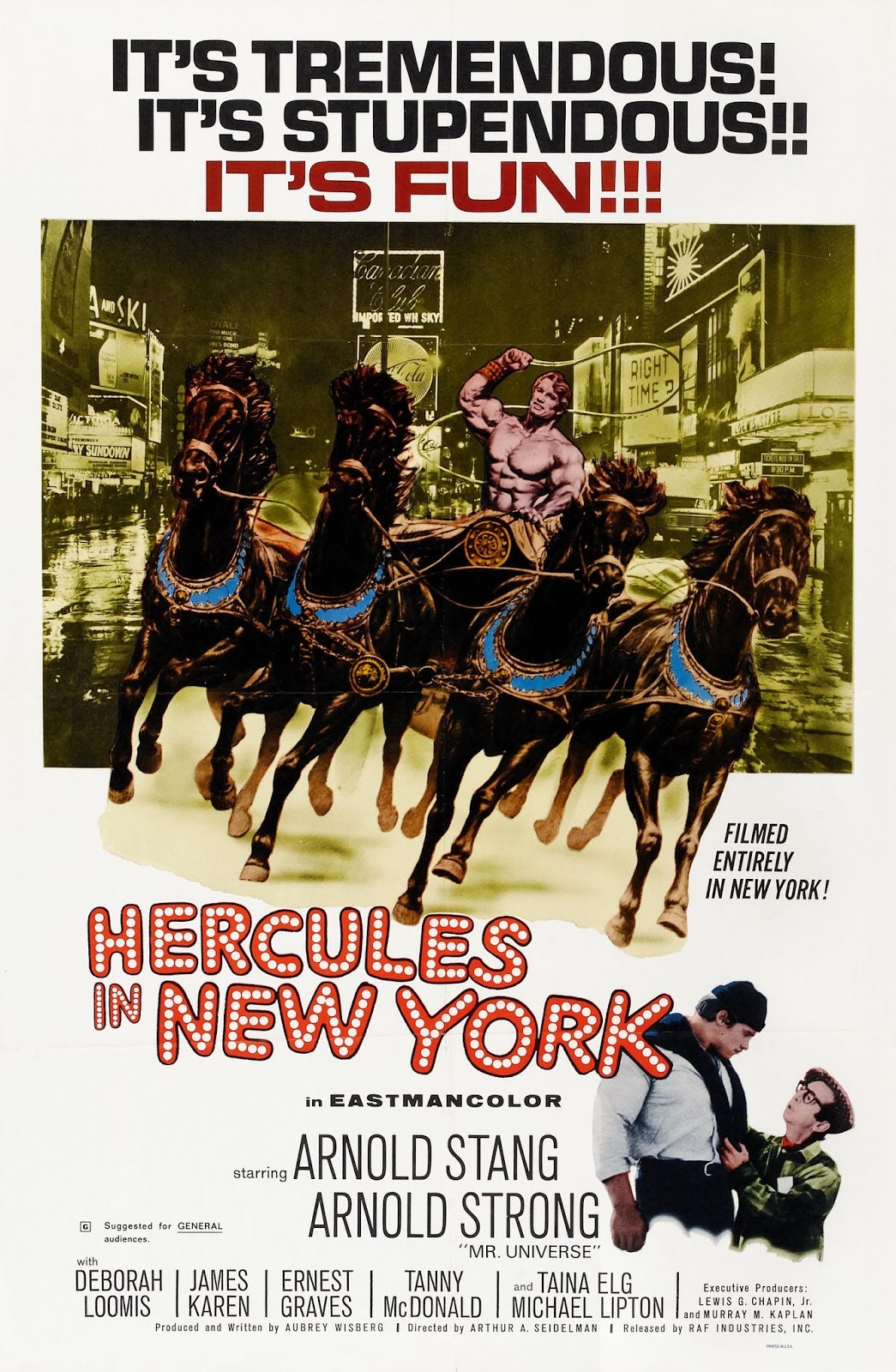 The movie has the great virtue of having been actually filmed in New York, capturing the NYC of 1969 in its often grimy glory. This is definitely a low-rent affair, and the props and settings are the real world of New York, which has a distinct lived-in appearance. The climatic chase scene is a hopelessly edited rumble through some iconic and some quite grubby parts of the city.

One of my favorite moments is when Hercules and his friends are beset by hoodlums, the gods arrange for help and Atlas shows up, but with is Samson, the Biblical strongman who finds his way into all sorts of Greco-Roman pantheons. The guy who portrays Pluto does a bang up job, as do several of the "pros" in this story, but it's a hapless mess of a movie they are in.

One thing that comes through in this for me is the sheer unlikeable nature of Arnold, who plays a pig-headed egotist and seems all to suited to the role. But it's unfair to blame him for this disaster. It's a movie meant to feast on his powerful frame, and it does so repeatedly.

Hercules in New York is a truly terrible movie, but is such a lame exercise that it's still interesting to watch, if only in a clinical fashion. I offer up as evidence the legendary bear scene. Take a look.