Bigfoot Is Full Of Scat!

The Ten Million Dollar Bigfoot Bounty is the latest installation in the most recent wave of Bigfoot fandom. It's a fundamentally stupid TV show, an odd cross between Animal Planet's highly successful Finding Bigfoot and the avalanche of high-octane game shows which litter the airwaves such as Survivor, The Great Race, and such. 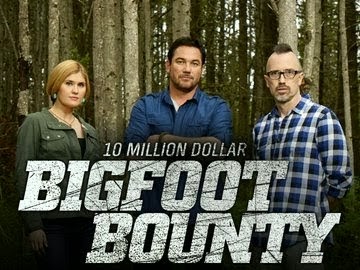 Dean Cain, former Superman actor serves as the peculiarly intense host inviting a gaggle of two-man and/or woman teams who have assembled to discover either compelling photographic or DNA evidence of the existence of the mythical North American phenomenon. The judges seem sober enough, Todd Disotell, a skeptical scientist (the one with the mohawk) and Natalia Reagan a very pretty primatologist, evaluate the "evidence" gathered by the teams.

So far the teams have gathered weak nature photos, some blood samples, assorted hairs, and a lot scat (which is hunter lingo for old shit -- ironically enough). So this show has tumbled along now for several episodes and it's too stupid. The teams are a motley array of true believers, wannabe reality stars, eccentric hunters, and lying-ass frauds. One doofus actually claims he has shot and killed two "Bigfeet". Bull-scat I say! The fact none of the hosts have called this lying dumb ass out on this clear and obvious  prevarication suggests that like almost all of these shows it's about generating a little personality heat on the screen and not remotely about some quest for the...ahem...truth about Bigfoot. The game is afoot and it's ratings! (Note: Since I wrote this paragraph one judge has called the stories out for the lies they clearly are.)

Dean Cain might be part of the legacy which might have made us believe a man could fly, but he will never be part of the one which will convince anyone that Bigfoot exists.