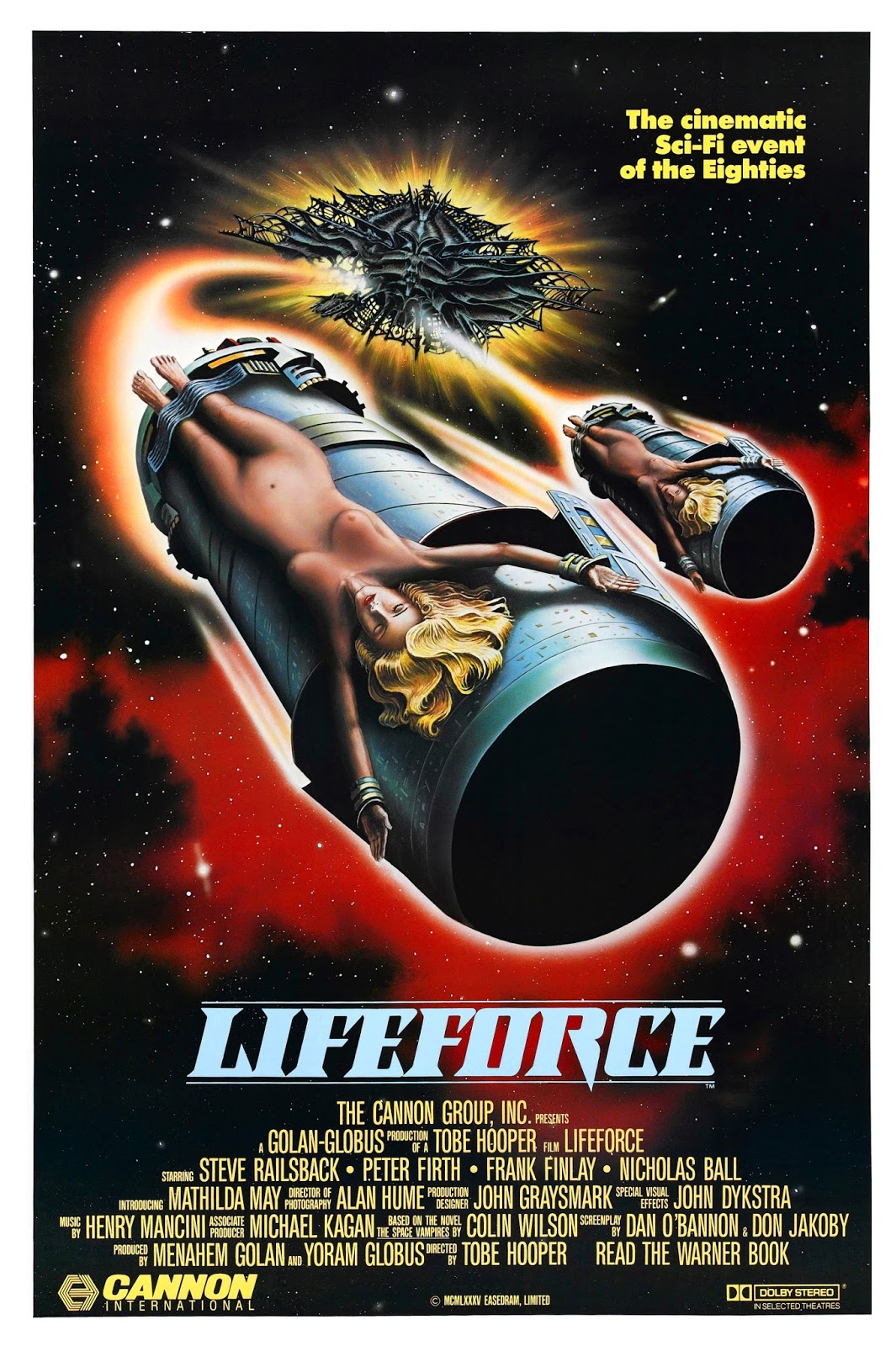 Lifeforce is one of those movies which sits between genres. It's clearly science fiction with shuttles full of astronauts exploring the depths of space and Haley's Comet where they discover an enormous alien craft full of dessicated bodies and three humanoids who would strike most anyone's fancy. And the movie then is also clearly horror as the three humanoids turn out to space vampires, the very source of the Earth legends about bloodsuckers, who have returned to ravage the planet and extract not blood exactly but "lifeforce"-- hence the title.

The title is largely the problem with this movie I suspect, at least as regards its meager box office. Lifeforce could be about anything and sadly sounds like it could be about nothing much as well. I didn't see this one in the theater at the time and I don't know exactly why, because it was released when I was devouring most any movie in the genre. I missed it and I bet the vague title has a lot to do with it. It's based on a Colin Wilson novel title The Space Vampires, that's a much better title. 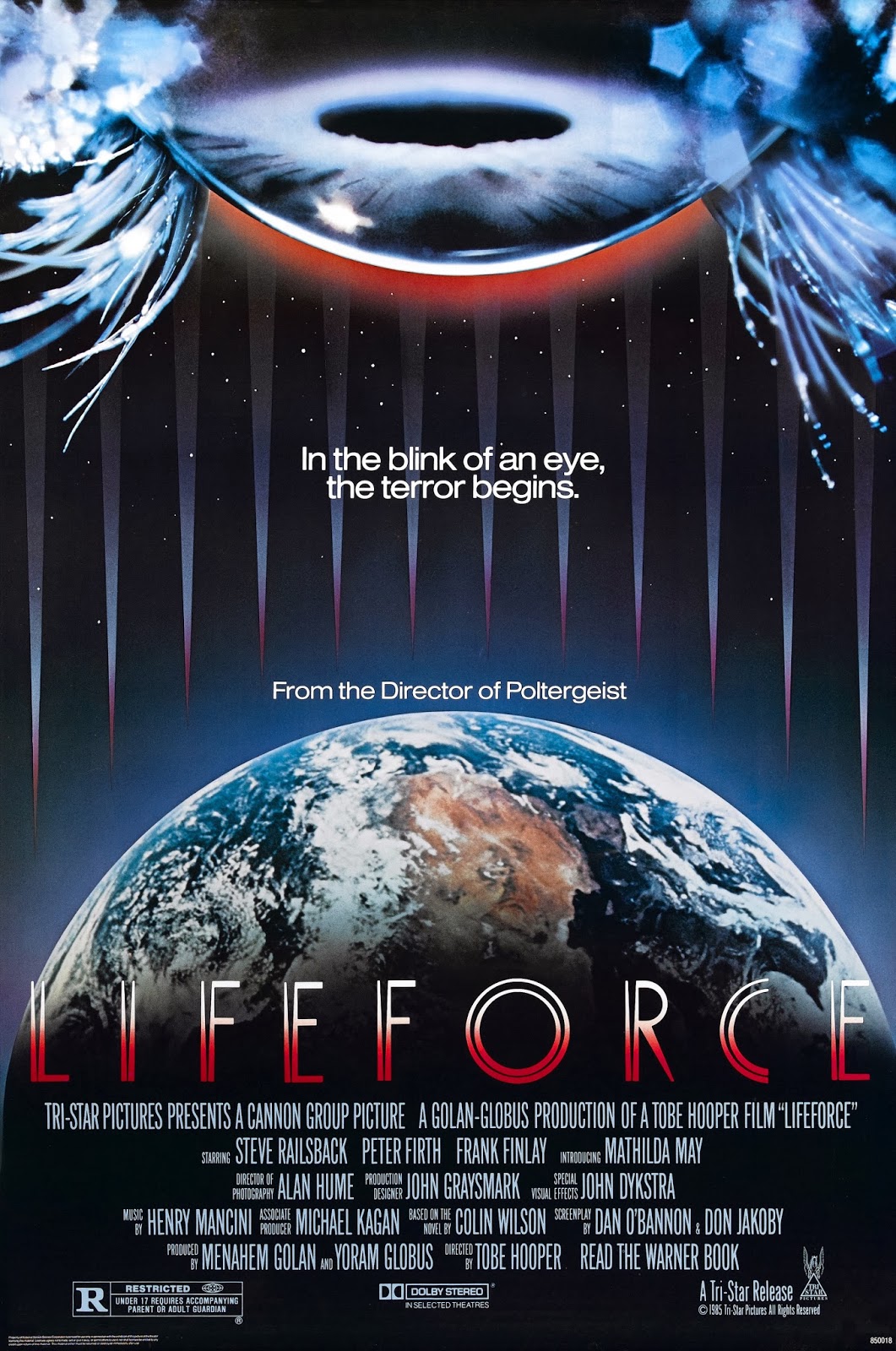 As well as this poster which seems like the title not to be about anything in particular. It's going for a Space Odyssey vibe I guess, but it ends up being a collection of images which don't compute. A hairy eyeball sees the Earth -- so what! It's horrible! I'd rather have seen the gloriously exotic poster at the top of this post with naked girls strapped to indistinct space pods flying away from some Lovecraftian thorne-themed spacecraft. That's an attention getter.

The movie itself though is a compelling bit of cinema directed by Tobe Hooper and offers up a slathering of classic sci-fi smeared onto a horror yarn with great all-around effect Lots of folks get totally distracted (as do almost all the characters) by the insanely nubile naked body of Mathilda May who plays the key "Space Girl" and head vampire. But if you can take your eyes off the delicious Miss May, you'll find a robust Hammeresque fear-fest with rampaging zombies, grotesque bat-creatures, and a solid cast of Brits more than capable of standing toe-to-toe with the utter destruction of the planet. 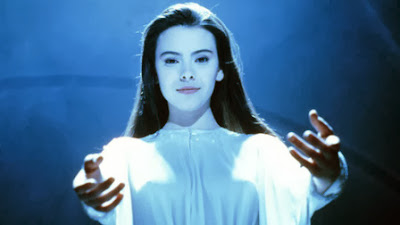 Lone American Steve Railsback charges through this movie getting ever more intense, but I find the likes of Peter Firth, Frank Finlay, and future "Jean Luc Picard" himself Patrick Stewart much more compelling with half the screaming. The story is pretty simple one actually. Astronauts find those alien vampires in the tail of Haley's Comet and under their hypnotic influence bring them to Earth where they ransack London and call out to their brethren to come and share in the feast. Along the way the police try to track the aliens with little effectiveness.

There are lots of back end explanations and without some convenient psychic flashes the story would grind to a halt pretty quickly, but when it's all said and done, I find Lifeforce to be a moody and involving horror show. The gorgeous Mathilda is just cream on an already tasty cake.

But Space Vampires would have been a much much better title.