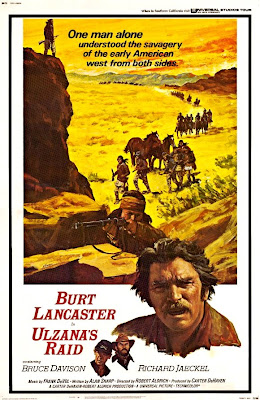 I caught this powerful little 1972 flick again a few days ago. I've only ever seen it on broadcast television, so I have never seen a theater cut of this movie (there are two apparently), and for a long time I assumed this was a TV movie, though a grim one indeed.

Burt Lancaster is outstanding as a grizzled scout named McIntosh attached to an Arizona cavalry force given the duty of overlooking the local Apache reservation among other things. When a dour Indian named Ulzana takes a few braves off the reservation and begins a small but brutal murder raid, Lancaster and a raw Lieutenant named DeBuin played by a young Bruce Davison take a few troops out to find and stop him.

This is grim stuff and plays very sparely and quietly. There are few blaring cavalry charges, and the ones there are are mostly futile. This is the story of a few men battling a game of deadly wits with another few men with lives hanging in the balance. The relatively small nature of the crimes committed add to the tension, as the story keeps its focus on the personalities of those destroyed.

The movie is reputedly a commentary on the Vietnam War and that might track, given what we see of a U.S. military force trying to bring to bay an indigenous force and being changed brutally by the experience. As grim as the movie can be at times, Native Americans are not demonized but always presented as men who are driven by passions which at once seem alien and commonplace.

The one conceit of the movie which strikes me most is that Ulzana (Joaquin Martinez), the titular "villain" of the movie never speaks, save to chant a bit toward the end. This somber and quiet bit of acting makes his motives inscrutable, though the viewer does identify regrettably with the Apaches. That is also because of the strong performance of Jorge Luke as Ke-Ni-Tay, an Apache who works with the cavalry and who offers a window into the Apache culture and way of thinking. 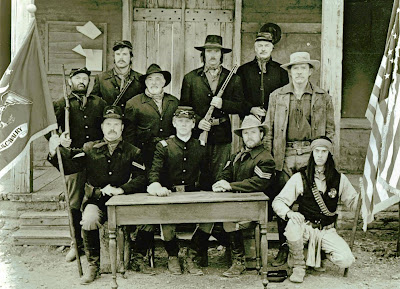 This is good stuff, with a lot of veteran actors like Richard Jaekel (as a tried and true veteran Sergeant) showing up and delivering rock solid performances. There are a number of actors commonly seen on television, which is one reason I always thought this Robert Aldridge directed movie was a television effort to begin with.

It's highly recommended. If you've not seen Ulzana's Raid and you like westerns, you are in for a treat. This one is in my list of top five westerns for sure.

Rip Off
Posted by Rip Jagger at 2:09 AM
Labels: Burt Lancaster, Western Movies