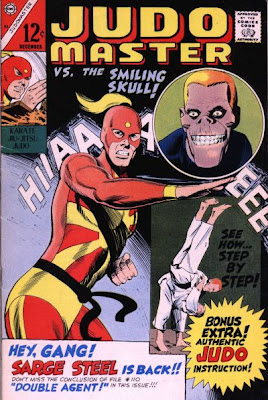 Judomaster #92 is dated December 1966. Frank McLaughlin's name is the sole name listed and I assume he again is responsible for both story and art.

"Judomaster meets The Smiling Skull" begins right where the last issue ended with the plane carrying Rip Jagger landing in Europe so that he can combat the spy ring he began investigating in the previous issue. Also still aboard that plane is the young Japanese-American boy who learned that Rip Jagger was Judomaster and who helped him in his battle with The Cat. Rip leaves the nameless boy with the MPs at the airbase but he slips away. Rip and his European contact follow a known spy but they are spotted and the spy runs away before being intercepted by the young boy who has followed Rip yet again. The spy captures the kid and uses him to escape. Intelligence reports allow Rip to discover the likely location of the spy ring as well as its leader a man named Rudolf Wolk, more infamously known as "The Smiling Skull". (Note: This villain first appeared in Sarge Steel #3 some years before.) Rip dons his Judomaster gear and is air dropped into the base where he is immediately intercepted by The Smiling Skull and his men. The Skull has heard of Judomaster's skills and wants a hand-to-hand duel with him promising him the safety of the boy and himself if Judomater prevails, but with the edge that bright searchlights will be used to diminish Judomaster's eyesight. The two struggle in the glare of bright searhlights, which continue to burn and in fact increase in number and intensity throughout the fight. Ultimately Judomaster knocks out The Skull, but he himself collapses in exhaustion. He is about to be shot by the Skull's men regardless of their bargain when bombs begin to explode around them all. He finds the young boy who he now calls "Tiger" but before they can leave Judomaster reveals that he has gone blind. With this revelation, the story ends.

The next feature is three pages and is titled "Judomaster's Sport of Judo". In this piece by McLaughlin Judomaster gives detailed instructions in the use of two moves, one called "Kubi-Nage" a head lock throw, and the other called "Tsurikomi-Goshi a lifting hip throw.

The back up is the second half of the Sarge Steel adventure by Joe Gill and Dick Giordano called File 110 "Case of the Double Agent". The story begins with Sarge and the spy Irena Dubaya on a military base where Dubaya is getting photos of the secure installation with a belt-buckle camera. Sarge is still pretending to be a double agent offering his services to the foreign spy ring. He tries though to turn Dubaya over to the Security chief of the base a Colonel Trask, but it turns out Trask is also a spy and having revealed his true colors Steel is forced to fight Trask saved from a bullet by his steel hand deflecting it. He knocks out Trask but Dubaya gives him a judo flip and gets him at gunpoint. Then Trask and Dubaya take Steel aboard a jet and overpower the pilots and steal it with the intent of dumping the bodies along with Steel's out the bomb doors. Steel frustrates Trask's attempts to seal him inside a bomb casing using his steel mitt and uses its single-shot .38 gun to do him in. He then uses the hands sleeping gas to overcome Dubaya and take over the plane landing it safely and handing the spies over to the authorties.

"Flips and Counters with Judomaster" offers up four letters, most complimentary of the comic to date, though a few are not happy with Judomaster's ponytail. There is mention made of the 25 cent comic Fantastic Giants. Of note is that one of the letters is from famous fan Bill Schelly. 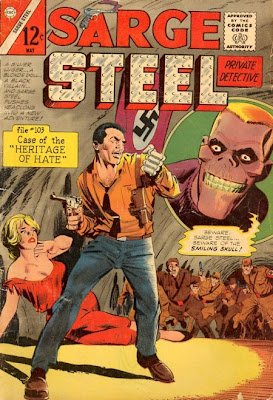 And that wraps another issue of Judomaster. A few things are apparent at this point in the series. One that the stories will continue from issue to issue with a clear sense of continuity between tales. Also that the continuity will be more strongly enhanced between comic book series as the villain here The Smiling Skull is from another comic to begin with. This is clearly an attempt by Dick Giordano to build a line-up that feeds across titles and essentially develop a Charlton universe. There will be other examples of these attempts at continuity, some quite cleverly done.