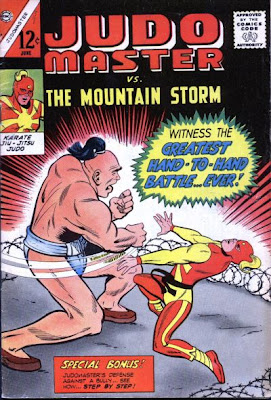 The lead Judomaster story is in two parts. Part I is titled "Prisoner of War". Both story and art are attributed to Frank McLaughlin. After a symbolic splash with Judomaster battling a giant sumo wrestler in a prison camp, we leap to page two and story begins with Sgt. Rip Jagger being called into the office of General Hawkins. Hawkins asks Jagger to volunteer to go behind enemy lines and inflitrate a Japanese prison camp to rescue Captain Brian Miller who has unrevealed "valuable information". Of course Jagger volunteers and soon meets up with a Ranger unit who take him nearly to his destination where he allows himself to be captured and taken across the moat into the camp. There he meets the Commander of the camp, who turns out to be a Ninjutsu. Jagger meets up with other prisoners and discovers that Miller has malaria and hasn't been able to reveal any intelligence. He begins to plan the escape after he learns about Mountain Storm. Mountain Storm is a silent giant sumo who uses the prisoners as fodder in his fights to entertain the Japanese troops. Jagger arranges the escape and plans to settle the score with Mountain Storm.

Part II is titled "The Mountain Storm" and sees the prisoners continue to plot their escape by building makeshift devices. But the Commander gets wind of the attempt and calls everyone out on the field. Some prisoners slip off to begin the escape using inflatable bladders used by ninjas to walk on water. Meanwhile Rip Jagger becomes Judomaster and confronts the Commander and the Mountain Storm. The next several pages are taken up with precise martial arts action sequences with Judomaster ultimately getting the better of the Montain Storm while the escape continues. But the Mountain Storm has one card left to play, as his name is apparently also the name of a particularly powerful judo throw, but when attempts it Judomaster is ready and swings the giant onto his knee for a painful backbreaker. Judomaster then leads the remaining prisoners in an attack on the Japanese overtaking a machine gun tower and mowing down some of the enemy. He then overtakes the Commander and defeats him. The battle over Judomaster disappears and Rip Jagger returns to lead the former prisoners to safety. General Hawkins congratulates Jagger on a job well done and mentions Judomaster's role, and it is unclear how much he knows about Jagger's dual identity. The last scene shifts abruptly to the island where Judomaster was trained and a conversaiton between Bushiri and Sensei about how sad Suzikawa (Sensei's daughter) is that Jagger is gone. 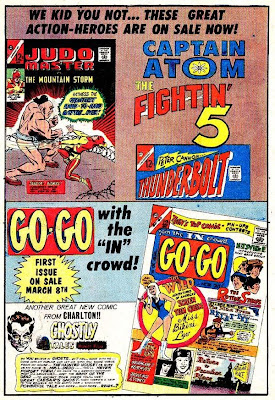 The second story is titled "Self Defense" and is really a tutorial featuring Judomaster and he gives step by step instructions on breaking choke holds and doing leg sweeps and a hip toss that looks much the "Mountain Storm" move from the first story. Both story and art are again attributed to Frank McLaughlin.

The text story in this issue is titled "The Finger of Fate" and offers up specualtion about a moviemaker seeing the perfect performer in a dream and then taking steps to find that specific individual. That is compared to a Chinese Emperor from ancient times who also followed up on a dream to locate and put into place the ideal man to lead as prime minister.

This is a solid issue, giving Judomaster plenty to do and also taking a few moments in the action packed story to do a tiny bit of characterization with the potential love interest. The relationship between Hawkins and Jagger is also one that seems at this point ripe with potential. Mountain Storm will show up again in the series, and despite not having a single line of dialogue proved to be a most memorable opponent for Judomater.