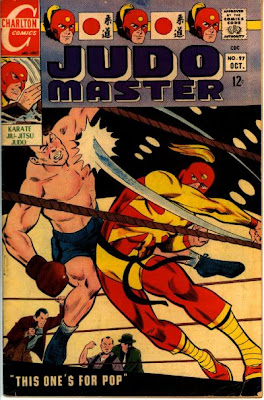 Judomaster #97 is dated October 1967. Story and art are credited to Frank McLaughlin.

The lead story is titled "This One's For Pop!" and begins with Rip Jagger and Tiger heading back to the U.S. and Rip returning to his college alma mater an ivy league school named Bridgeport. Rip takes Tiger into the gym area where he meets up with his old boxing coach Pop McKeon. Soon after a former classmate and now professional boxer Rocky Vars shows up. Rip notices that Pop seems agitated at Rocky's arrival as he and Tiger leave. They later attend a series of matches between Bridgeport and New Haven and it comes down to the final bout featuring Pop's new star Johnny. But after doing very well in the match, Johnny takes a dive to lose the match. Rip goes to see Pop about it but he denies it, and so does Johnny when Rip confronts him. Rip sends Tiger to follow Pop then heads to Pop's home where he meets Joanne McKeon, Pop's daughter who has grown up since Rip left. She leaves to go on a date with Rocky Vars. Then Tiger shows up and reports what he has seen following Pop, specifically a meeting with a shadowed figure which confirms that something illicit is going on. Pop shows up at his house and Rip confronts him again and he finally admits that Rocky Vars has been behind the scheme and has threatened Joanne's life. Rip then becomes Judomaster and confronts Rocky and the two put on gloves and have a boxing bout, which goes well enough for Judomaster until Rocky kicks him then Judomater beings to use his other skills and finally knocks out Rocky. Then one of Rocky's henchmen pulls a gun, but Tiger and Johnny appear and soon enough the gang is subdued. Johnny then admits he loves Joanne and the story ends with the lovers kissing and Judomaster and Tiger slipping away out the door.

Sarge Steel returns in a story written by Steve Skeates, drawn by Dick Giordano and again with A.Machine on letters. The story is title "Case of the Widow's Revenge" and it is File 114. The story begins with a car trying to run down Sarge at a local newsstand but missing and demolishing the newsstand killing the proprietor a blind man we only see in profile named Old Charlie. Sarge then runs down an alley when he hears footsteps and is soon shot at, but he returns fire and kills his attacker. Returning to his car he finds a beautiful woman wrapped in a fur stole waiting for him. She claims to be the niece of Donald Reynolds a man Sarge sent to prison and who died there. His wife is the one behind the attempts on Sarge's life along with his old partner a man named Ralph Gonner. Sarge then goes to Gonner's house and confronts him becomes convinced he's not involved. Returning home he finds a figure in the dark waiting for him, but quickly turning on the lights blinds the person and after a quick exchange of gunfire he finds the girl who turns to be the daughter of Reynolds and not his niece and she is the one behind the plot. She dies in Sarge's arms and he reminds us all what a rotten world it is.

"Flips and Counters with Judomaster" offers up four letters. There is some discussion of Charlton's cover design specifically the image of Judomater breaking a board which has been an emblem since early in the series. Giordano say he's phasing that out with the next issue. Also of some question are the Japanese characters which are part of the decoration on the top banner of the comic alongside Judomaster's head. Giordano says he's been told by McLaughlin they have something to do with Judo, but he's not sure what exactly. Giordano also speaks to a the question of credits and says flat out that Frank McLaughlin has "written and drawn every issue of JM to date". This seems consistent save for the debut which lists Joe Gill as the scripter. Doubtless McLaughlin plotted that issue also.

This is a neat little issue. The story gets Judomaster stateside again and if the series had continued, I'm curious how much of his past life we would've eventually have seen. There is the neat notion here that his training as a boxer helped him master his judo skills more quickly perhaps. Because he is the scripter of the debut Joe Gill is almost always mentioned as the co-creator of Judomaster. But it seems pretty obvious that Frank McLaughlin is the guy behind the character through and through. Gill as great as he was, seems to get a bit of glory he doesn't quite deserved in this instance.

Below are some original art images from this story. These are the last five pages of the tale. 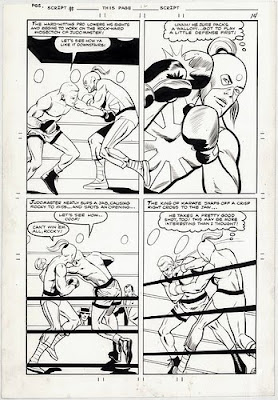 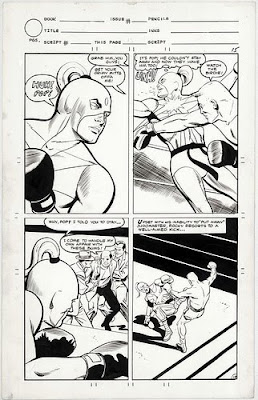 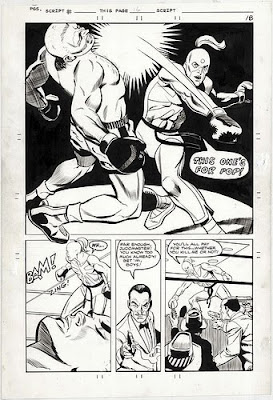 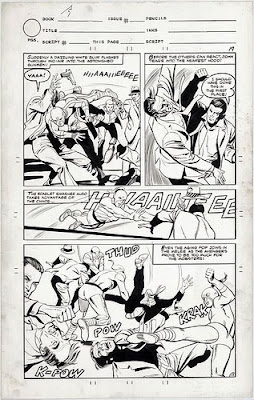 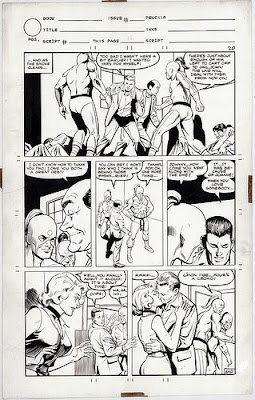 One more to come.