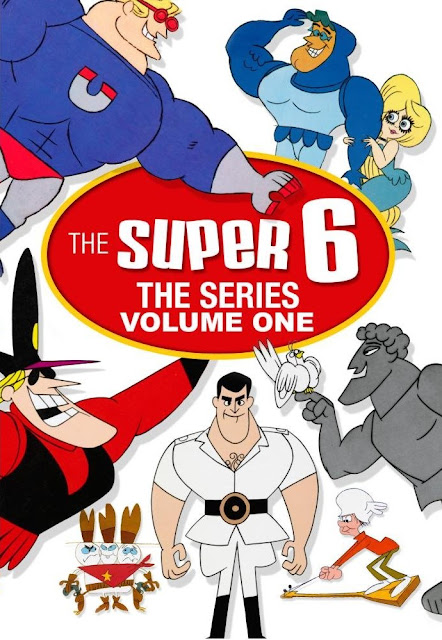 What's to say about this short-lived cartoon show save perhaps that it's both more entertaining and more boring than I expected. The Super 6 was yet one more show which sought to capitalize on the superhero boom of the 60's and in doing so offers up cartoons that really need to be seen in some instances to be believed. There are as the title suggests six superheroes we are mostly concerned with though several others are shown and on rare occasion mentioned. 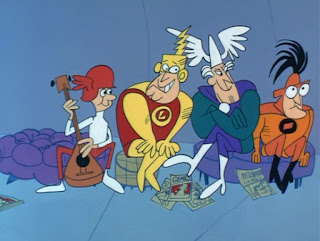 There is Elevator Man in white safari gear including jodhpurs. He can shift his size thanks to the controls in his belt. The adventures of Elevator Man are actually almost serious with a nifty film noir narration. 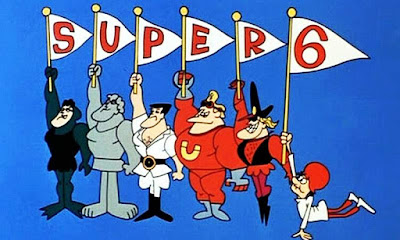 There is Granite Man who is an actual statue given life as a hero by his pigeon pal Percy who says a spell to unlock the granite figure. He's calm and exceedingly pleasant to be a superhero who punches out folks. 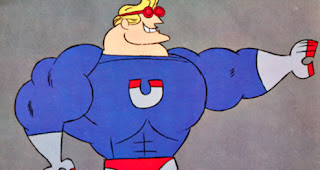 There is Magneto Man who is British, actually a lot like Michael Caine with some Cary Grant overtones in the voice. He has magnetic gauntlets and is helped by Cal, a small blonde boy who seems to be a genius of some sort. 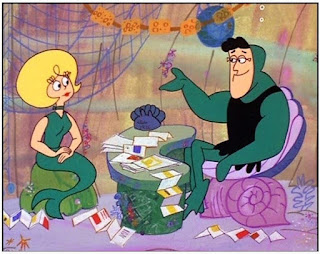 There is Super Scuba who is an undersea hero who lives in a house not that dissimilar to Sponge Bob's hangout. He sounds like Bing Crosby oftentimes and is helped by Bubbles a mermaid who sounds like and resembles Carol Channing. 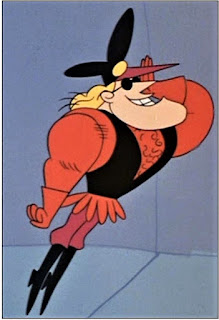 There is Captain Zammo, time traveling hero who has a very prim style and is assisted by the eager and loyal Private Hammo. Zammo has a bunch of powers and gives off a very precious attitude. 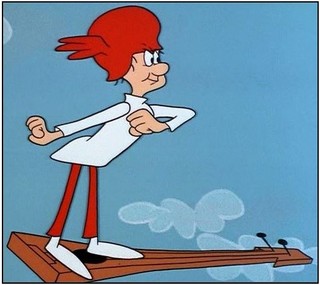 And finally there is Super Bwoing, a hapless teen apprentice superhero who sounds like Jimmy Stewart. While all the other heroes rotate in the last segment of the show, each getting four episodes of the total of twenty, Super Bwoing is featured in the first segment and is in every show and all the bumpers to boot. He gets his assorted powers from guitar which also serves as his transportation. 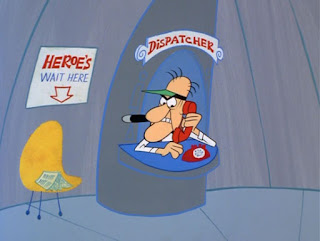 All of these characters work at Super Service, place pretty much like a taxi hub with a bedraggled Chief fielding calls and assigning the available heroes for the job. Sometimes it's based on talents, but most often it's just about who is available (usually Super Bwoing). 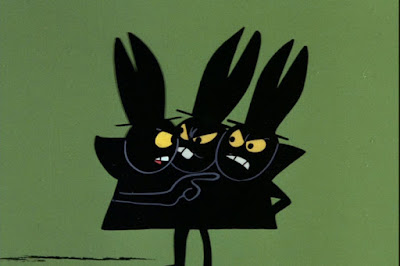 Now there is one more element in the show, the middle segment which is given over to The Matzoriley Brothers, who have nothing to do with the rest of show as far as I can tell. They are three heads on one body, a mutant variation of the Three Stooges with an ethnic component thrown in. The three heads are Weft, Wight, and Wong. Wight is grouchy and aggressive, Weft is meek and timid, and Wong is a vintage Asian stereotype. They are based on a villain who appeared in an Inspector cartoon. I cannot explain this cartoon nor will I try, 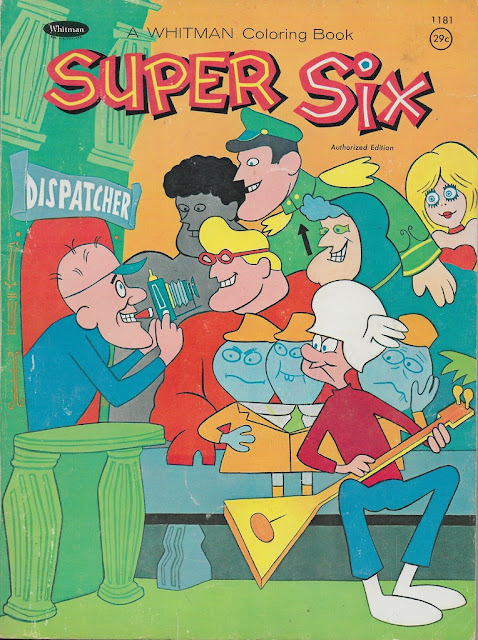 Note the different design in the coloring book above for Elevator Man -- I'm glad they changed it. The show should be better than it is given that it's done by the same folks who did The Pink Panther and The Inspector, both cartoons that often get laughs from me. But the laughs are few and far between and mostly it seems to be about diverse characters who I guess are built to make superheroes seem mundane. A lot of this is well done and the colors can be wild, but so much of it just doesn't gel as ought to. Or maybe I watched to many of them too quickly, not the way they were designed to be consumed.
Note: This post originally appeared at Rip Jagger's Other Dojo.