Batmania - An Evening With Batman And Robin! 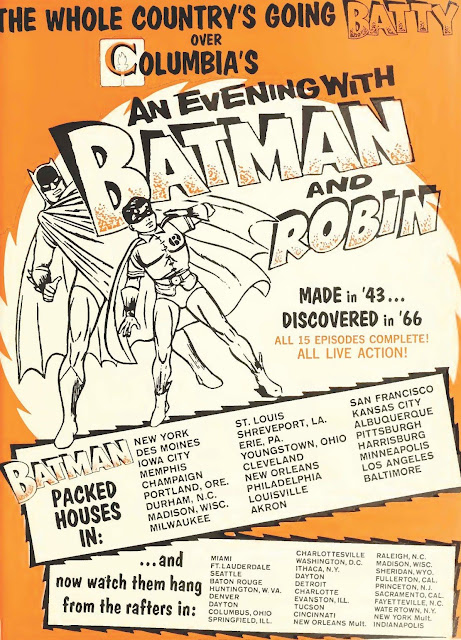 Comic book lore is filled with delightful myths. One of the more famous is the supposed meeting on the golf course between the publishers of DC and Marvel which gave birth to the Fantastic Four after the latter heard about the success of the Justice League of America. Great story, likely untrue. My favorite bits of lore is that Hugh Hefner saved comics when he showed a vintage Batman serial at the Playboy Club (or mansion) which got great laughs and so inspired the producers of the Batman TV show that a rich market was out there for a camp take on superheroes. The success of the show lifted many boats allowing comics to hang on for a few more years. Apparently, it's not true either and the confusion perhaps comes in that the serial was shown at a place called the "Playboy Theatre". The creators of the show say they weren't influenced by the serial and only the comics, and there's no denying they read the comics since many of the plots for the first season are from actual published Batman stories.  But still I have to suggest that they at the very least saw the serial Batman and/or its sequel Batman and Robin. 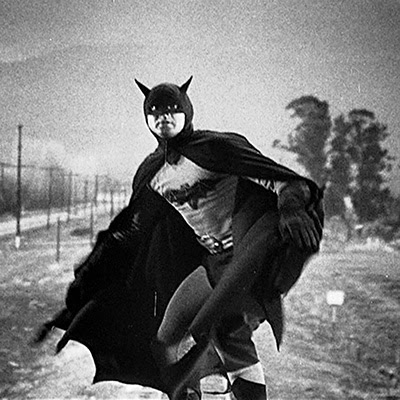 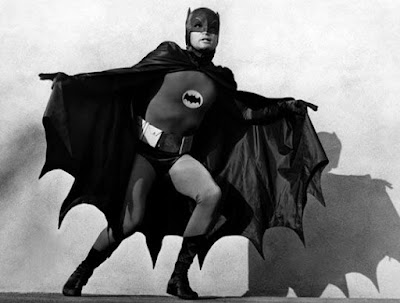 There's no denying that there is marked similarity between the tones of the movie serial and the television show, with the use of humor to hide the inherent weaknesses in the concepts. Also, the TV show from the outset used cliffhanger endings which tells me the producers were indeed trying to emulate the vintage serials even if they had not been inspired by them but rather the comic books which gave birth to both. The real truth is that Batman the TV show was a smash hit (for a short time) and as we all know success has many fathers who want to grab a share of that glamour. 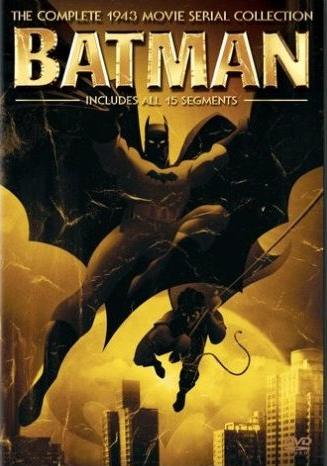 1943's Batman is a Columbia serial and the truth is those don't age well. The budgets were relatively tiny and they had squeeze out fifteen chapters with fourteen death-defying endings. The aspect of this show which can startle a modern viewer is the raw racism which marks the portrayal of the Japanese villain. J. Carroll Nash as he lisps his way through a thankless role which does showcase his utter evil but does it in a a pretty ham-fisted way. But such is the stuff of serials of the era -- mighty entertainments which will make a modern sensibility flinch more than a little bit. The hideout which is a haunted ride detailing the horrors of the war in the Pacific and beyond is a nifty touch about the times and points to the war to come in the Pacific. 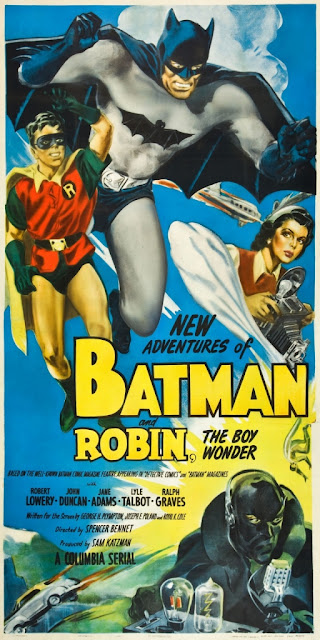 The serial is entertaining in its way and so Columbia not only produced a sequel in 1949 but years later found it a ripe vehicle to send out to the arthouse theaters which often thrive on college campuses and in larger cities. The serial gained a rep as a four-hour blast of feckless fun and proved a useful respite from the incessant worry about crime, war, and impending nuclear devastation. And so they slapped the title An Evening with Batman and Robin on the vintage show and sent out across the nation where is was met with no small success. There is little reason to doubt that this successful burst of camp fun didn't trigger the TV show as well.
Rip Off
Posted by Rip Jagger at 12:00 AM