Sunday Of Stone - Turok Volume One! 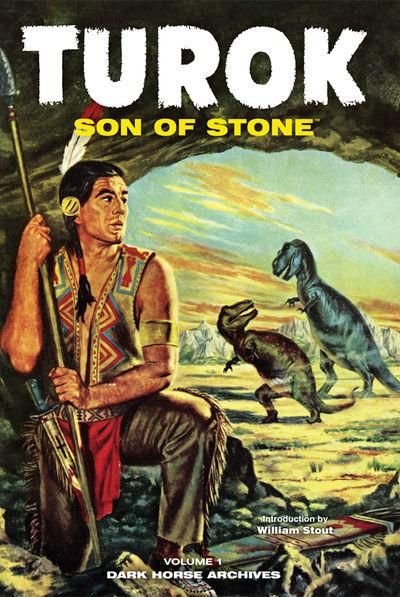 Much to surprise of many at the time I'd suspect, Turok Son of Stone published first by Dell Comics and later by Gold Key when Dell and Western Printing went their separate ways, lasted from 1956 until 1981, when Gold Key itself gave way to the strains of meager newsstand sales. In those many years Turok and his able ally Andar struggled for survival in the "Lost Valley" a remote territory beneath the Earth's surface (sort of) which was teeming with creatures from bygone eras. But of those creatures which included man, it was the sundry and exceedingly dangerous dinosaurs which dominated the fight to live both in the valley and on the comics racks. Kids love dinosaurs and Turok delivered big old ferocious dinosaurs on a regular basis. 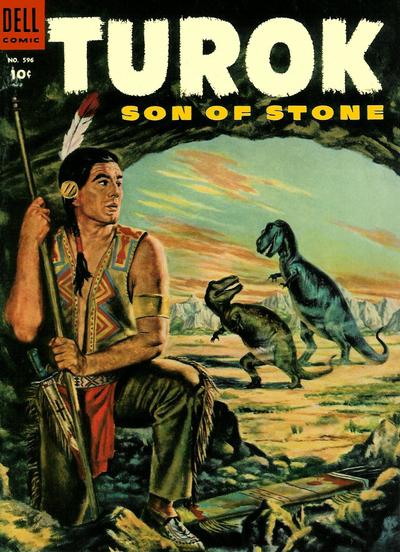 The story begins when two Pre-Columbian Native Americans from the Mandan tribe are travelling far from their traditional territory and find themselves inside the Carlsbad Caverns in New Mexico. They explore the caves ever more deeply until they are lost and then suddenly find themselves in a world not of darkness but of light, a lost valley of sorts in which thrive all sorts of creatures from prehistory. Turok is the older of the two with Andar responding to him as something of a big brother. At the time as depicted by Rex Maxon the two are not that seemingly different in age, though of course that will change. Apparently, this series began as a version of a character named "Young Hawk" intended for the back pages of the Lone Ranger comic. But creator Gaylord DuBois saw more in the concept and so we get this story in Four Color #596 from 1954. It turns out there is something innately fascinating about two primitive men facing off a world full of even-more monsters. Robert Susor is credited with the debut cover art. 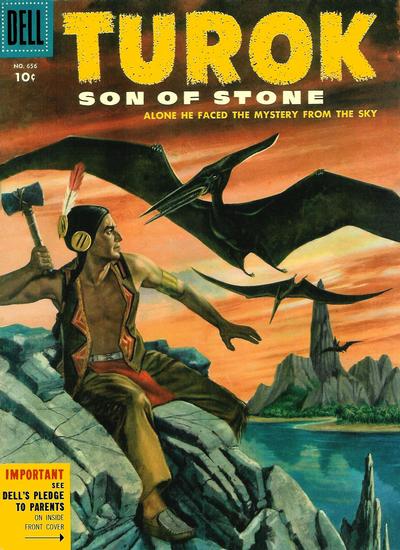 One of the key discoveries made by Turok and Andar are poisonous plants which when prepared and applied to their arrows make them sufficiently deadly to fend off the giant dinosaurs which roam the valley. The two take up with a primitive tribe of cavemen and become somewhat revered by the tribe for the improvements in life that they bring. In this second story published nearly a year after the debut in Four Color, Turok and Andar find a second valley, this one mostly occupied by mammals of great power such as a deadly panther that stalks them relentlessly. They become even more friendly with the cave tribe. Bob Correa takes up the interior art chores but the dramatic cover is uncredited. 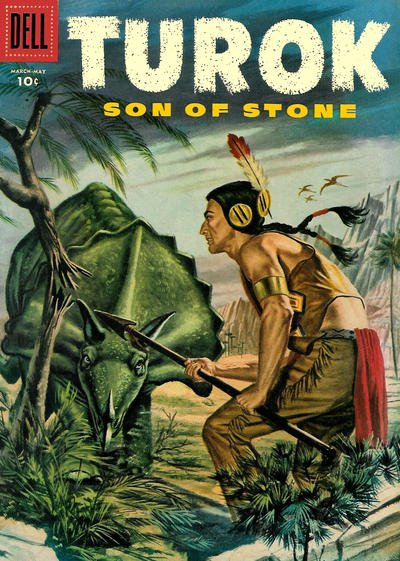 In the third installment, which becomes Turok Son of Stone #3 (the Four Color issues becoming defacto #1 and #2) our two lost heroes help the cave tribe to find a safer place to live apart from the dinosaurs (called "Hoppers") and other threats such as sabre-toothed cats. The find an island and make some small boats to reach it but find threats under the water are extremely dangerous as well. They do eventually get the tribe across the dangerous waters in canoes Later Turok and Andar check out yet another cavern in an attempt to escape the valley and find yet a third hidden land. They team up with a caveman named Lanok who followed them, and the trio try to survive. Bob Correa is still drawing the DuBois scripts with assist from Jack Abel on inks on one tale. 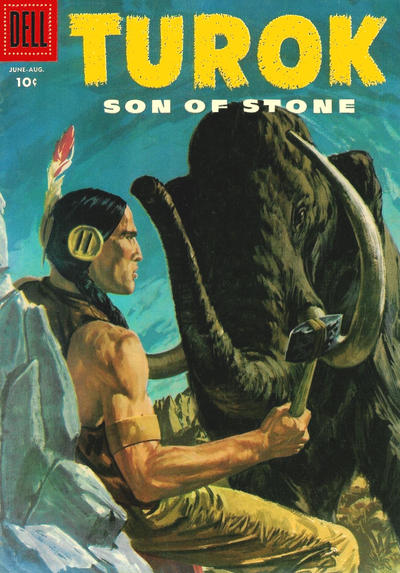 In the fourth issue of Turok Son of Stone in this first volume the trio finds the trio of Turok, Andar, and Lanok still are living among the "Hoppers" when they discover a land bridge which may let them escape the valley. But they have to give up plans to save Lanok from a massive herd of rampaging bison, and the bridge is destroyed. Later as they make their way back to the tribe, they are hunted relentlessly by a Smilodon better known as a sabre-tooth tiger. They barely survive. The art is again by Bob Correa with some help on one story by Bob Celardo. 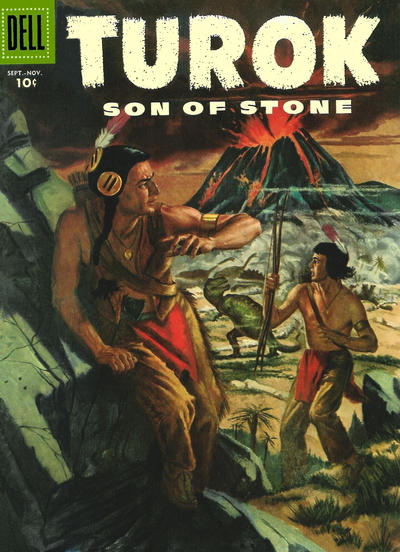 The penultimate issue in this volume and the fifth installment of Turok's adventures is maybe the most hair-raising yet as the island haven turns into a deadly volcano and the boys and the cave tribe are barely able to escape the ferocity of the explosions and the lava and the panicked creatures. When they have resettled the cave folk, Turok and Andar go to look for escape and find that the local witch doctor jealous of their influence on the tribe follows them to find out the secret of their poison which allows them to stave off the attacks of the "Hoppers" and other deadly beasts. His scheme fails with fatal results and Turok and Andar find yet another small valley which might offer some respite from the beasts. The art this time is again by the team of Correa and Celardo. The sixth and final issue of Turok in this volume features another story by DuBois and more art by Bob Correa This time Turok and Andar protect the cave people from the threat of a deadly giant ape and later protect the secret of their possible escape from the valley from an untrustworthy fellow named Acomac while reuniting a small mammoth with its parent. These two Turok tales are followed by the debut of a new feature titled "Lotor" about a raccoon family trying to survive in this lost land of dinosaurs. As it turns out the wily racoons do quite well. The art for this story might be the work of Vince Alascia. There have been several text pieces in the comics, some dealing with Native Americans coming of age, but most detailing prehistoric critters like the Mastodon, the Smilodon and even early man himself. Once again sadly the cover art is uncredited.
These early tales begin in 1954 and end in the early months of 1957, nearly three years of Turok adventures. The series seems to have found a footing and a dedicated audience. This audience will change over time of course, but there will be enough dedicated Turok readers to keep the series going for well over a score of years. More to come next week.
Rip Off
Posted by Rip Jagger at 1:00 AM