The sign in the 60's that a thing was indeed worthy of serious consideration was whether it made it into the black and white pages of MAD Magazine. If Alfred E. Neuman found it interesting, then I knew I should also. In fact most of what passed for popular culture in the 60's and early 70's was filtered to me through the "Usual Gang of Idiots". And so it was with Batman the TV show. It hit like a shooting star onto the streets of America and blazed out almost as quickly but not before MAD took a crack at it. It rates a spot-on cover by Norman Mingo. 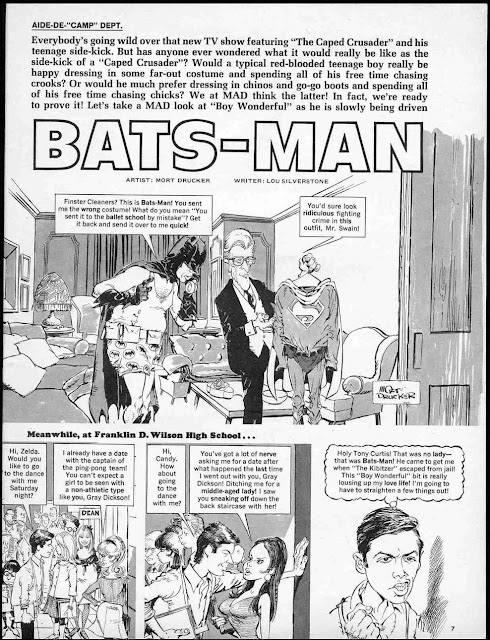 The story is called "Bats-Man" and it was written by Lou Silverstone and drawn magnificently by Mort Drucker. It makes a glancing blow at the premise of the show by sowing discord between "Bats-Man" and "Sparrow the Boy Wonderful". It seems all that crimefighting is crimping poor Sparrow's love life so he plots to end the partnership in some mighty ferocious ways. To read this blast from the past check out this handy Bat-Link to Crivens! Comics & Stuff   operated by Kid a longtime reader and responder of this here Dojo. 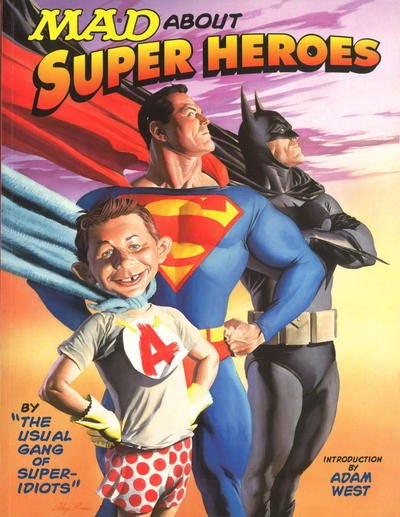 I personally read this story this time in MAD About Super Heroes from a few decades back. It sports a delightful Alex Ross cover but inside are all the Batman parodies done to that point along with Superman and others as well. It features an introduction by Batman himself, the late great Adam West.
Rip Off
Posted by Rip Jagger at 12:00 AM