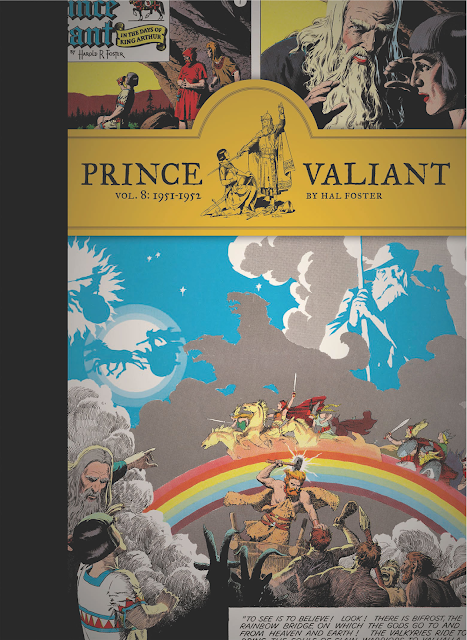 As Prince Valiant enters the 50's with the eighth Fantagraphics volume, he's a much more settled fellow, still a young married man but already with his first son Arn. That family life was perhaps he sought out some adventure and with is two comrades Egil and Rufus along with the young Arf are winding their way across the fragments of the Roman Empire heading to Rome to see the Pope about sending Christian missionaries to Thule to bring the new religion into the North. They've helped defend a small castle under seige and now must cross over the Alps into Italy.

To that end Prince Valiant seeks out furs to make proper gear and comes under attack but after many harrowing escapes comes back to his friend and they make the dangerous trek, but not without cost as young Arf is injured and will eventually lose one of his feet. Leaving the injured page behind they get to Rome only to find the Pope is in Ravenna. They do arrange for missionaries at long last and Valiant and the injured Arf sail home to bring the news while Egil and Rufus come overland again with their Christian charges. While sailing Valiant bucks up the young Arf who is now forlorn since he can never be a knight. Valiant says that he'd make a better scholar and that eventually thrills Arf along with the arrival of a pretty girl named Adele.
After a brief stop in Camelot, Valiant at long last gets back to Thule with his news and finds Aleta happy, Arn growing and two new baby girls. Boltar gets into trouble with King Aguar of Thule and barely escapes with his life thanks to Tilicum -- Aleta's Indian attendant. The Danes attack and Boltar is reinstated and married to Tilicum after the heady sea battles. Then it's a series of somewhat domestic adventures for Valiant as he and Arf barely escape a dangerous accident deep in the wilds and later he is key in bringing down a small tyrant enslaving the freeman in his area. Later he regales Arf with is tales of daring from his younger days and the new scribe dutifully records these adventures for posterity. The baby girls are Christened and named Valeta and Karen as Arn is kidnapped while under Boltar and Tilicum's care. But the doughty Native American woman ferociously tracks down the kidnappers and Boltar brings them to ultimate justice. 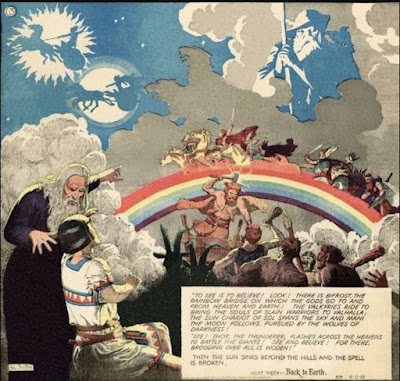 As the volume closes despite grand tales of the Norse gods, the conflict between the old pagan relgions and the new Christian one is brewing. This is a much more domesticated version of the Prince Valiant saga. Foster indicated that Valiant's story had really come to its classic conclusion when he marries his love Aleta. All that follows for many many years is what happens after and while it's far from "happily ever after" it's still a pretty darn good version of marital bliss.
Rip Off
Posted by Rip Jagger at 1:00 AM