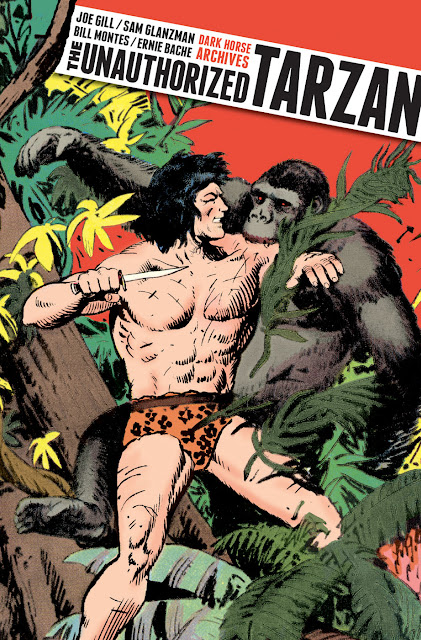 Over the course of the last year or so Edgar Rice Burrough's greatest creation, Tarzan of the Apes has been getting bountiful attention, and lots of wonderful material both in film and print has been made available to the public. That's most certainly the case with the rare Charlton Comics series Jungle Tales of Tarzan which debuted in 1964 and lasted all of four issues, disappearing literally from the stands by the late summer of 1965.  Dark Horse Comics has at long last issued all four of these charming comics together in an exceedingly handsome  volume titled The Unauthorized Tarzan which shows off the work to its best effect. 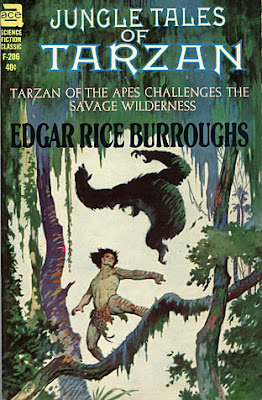 There are three essays in the Dark Horse collection by Roger Broughton, a man who currently owns much of the classic Charlton art and has offered it in reprint over the last many years under the ACG and Avalon brands. Broughton adds quite a bit to this unknown saga in both comics and Tarzan lore. In the early 60's it seemed to many that some of the classic and popular Tarzan material had fallen into public domain. This created a scramble as paperback publisher ACE and others started to generate product. Charlton's editor Pat Masulli was assigned the task of bringing Tarzan to Derby, and seeing an opportunity commissioned always reliable writer Joe Gill to create adaptations of ERB's material. Tapped to draw the book was Sam Glanzman, a guy who had just finished a respected run on the recently cancelled Kona for Dell Comics. 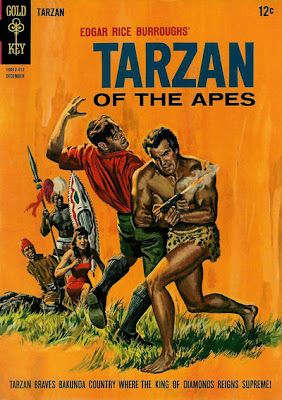 These two veterans under the guiding hand of Masulli created a Tarzan comic book less devoted to the famous film version of the character and more closely derived from the original ERB material. The then current Gold Key rendition of the character by Gaylord Dubois and Jesse Marsh stood in marked contrast to this more literate approach. 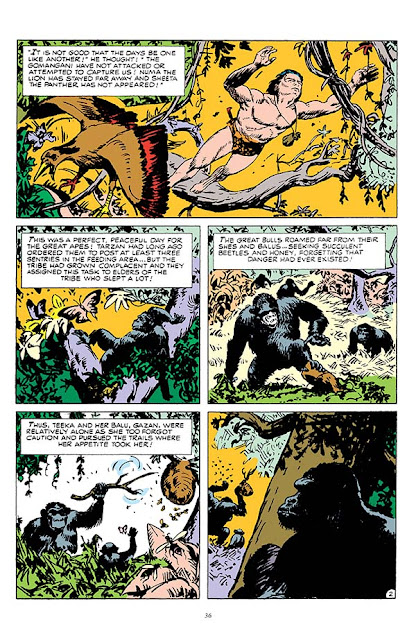 The goal seemed to be to evoke the classic Hal Foster comic strip and this was done by not using word or thought ballons, but confining the text to neat caption boxes. So the whole thing comes across as more of an enhanced illustrated story rather than a full-blown traditional comic book. It's really a very clever and surprisingly subtle move by Charlton, a company renowned for generating lots of medium quality comics. You get the sense they really really cared about this project.

Unfortunately it turns out that the ERB estate took legal issue with those who appeared to be using Tarzan's name in vain and they brought the various productions to a halt including Charlton's, seizing all the artwork and the materials related to it. Jungle Tales of Tarzan as a comic book disappeared from the stands and it became a taboo topic within the halls of Derby. So sensitive was it that Broughton claims to have found it difficult to find anyone who would even discuss it years after the fact. If it were not for the comic books themselves which were already in the hands of fans, there would be little if any evidence this series ever happened.

But it did. Here's a short review of the results. 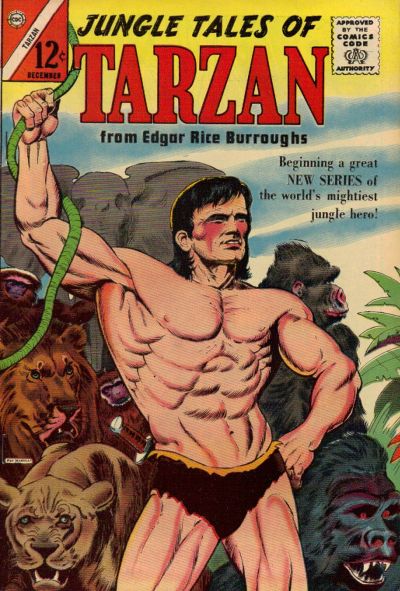 Under a Pat Masulli cover which seems to want to evoke the fantastic physique of Tarzan actor Gordon Scott, we find the first of several stories by ERB adapted from his stories of the Ape Man when he was growing up among the Mangani and learning the ways of the varied denizens of the jungle. These are often charming stories filled with wonder and well suited to the perceived youthful audience for comics during the early 60's.  In issue one two of ERB's stories are featured, The Capture of Tarzan and The Fight for the Balu. There is also a short piece detailing Tarzan's origin, though it treads lightly on the role the Mangani leader Kerchak played in the death of Tarzan's father. 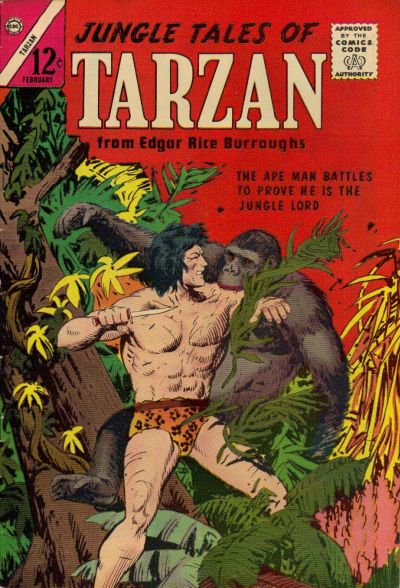 The second issue features a cover by interior artist Sam Glanzman and offers up a Tarzan somewhat less robust, but seemingly more agile battling an ape knife in hand. The two stories in this issue are The Battle for Teeka and Tarzan Rescues the Moon. 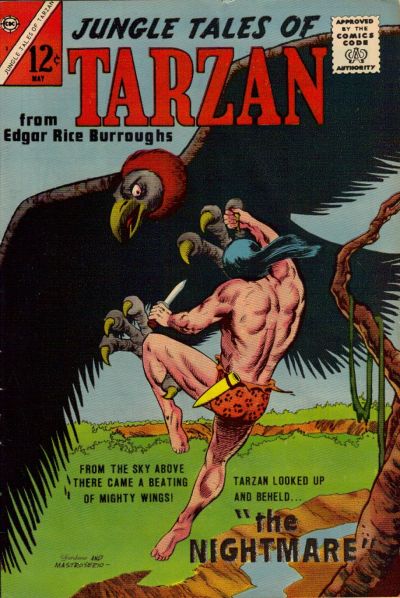 The third issue showcases a cover by Dick Giordano with inks by Rocke Mastroserio. The interiors again by Glanzman and Gill tell the stories The Nightmare and The God of Tarzan. 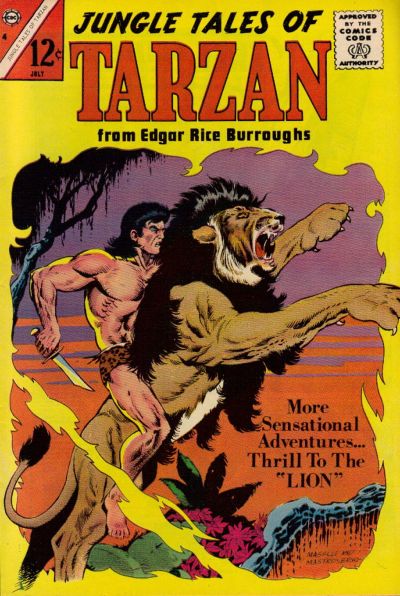 The fourth and final issue features another Masulli cover this time inked by Mastroserio with Tarzan in his classic pose battling Numa the Lion. The stories in this issue are The Lion and The Jungle Joke.The interior work on this issue has Bill Montes and Ernie Bache drawing a Joe Gill script. The Montes and Bache team is much different than the rugged Glanzman, but their rendition of the Ape Man has its charms.

This volume would be a prize if it only contained these handsome stories, but also included is something even the lawyers of the ERB estate didn't seem to know about. In addition to the comic book Charlton planned to launch a comic strip again featuring scripts by Gill and art by Glanzman. These unknown gems have been hidden away in a box in Glanzman's possession until featured as part of an art exhibit fifteen years ago.Broughton includes them here along with some other Glanzman artwork .

This is gem of a book for any Charlton or Tarzan fan. I happen to be both, so it's doubly so for me. The comics are exquisite, and the essays are outstanding. One really gets the sense that contrary to what we traditionally think about Charlton Comics, the folks involved with this project were genuinely proud of what they'd accomplished, thought it was really superior, and there is a real sense of grief when they were forced to stop production. It's nice to know they cared so much.