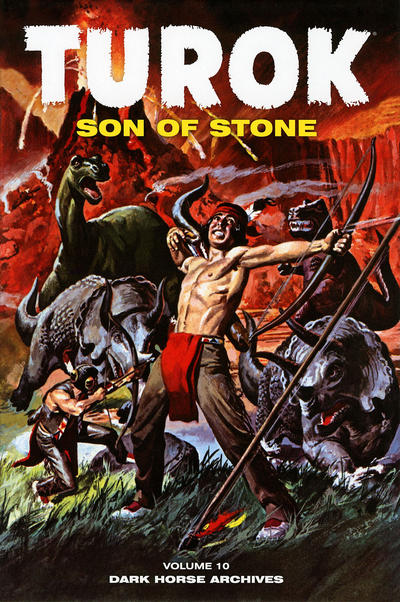 With its tenth volume Dark Horse ceased its reprinting of Turok Son of Stone. It's a shame they didn't complete the run but truth told the quality of the reprints in the final three volumes is somewhat suspect with bindings that are not all that reliable. Not something one wants to find in an "archive" item. The stories in this collection take Turok and Andar nearly into the 70's and as the series closes out the 60's it is a mature comic with a settled format. Underneath solid George Wilson painted covers we get stories by Paul S. Newman that offer clever alterations of the vintage scenario. Turok and Andar are not full characters but are not just stereotypes either. Both demonstrate degrees of wisdom and bravery which benefits the other and while it falls most often to the younger Andar to play the naive partner it is not always the case. The art buy Giovanni Ticci and Alberto Giolitti is rock solid if and for me a major lure in the days when I collected the comic off the stands. 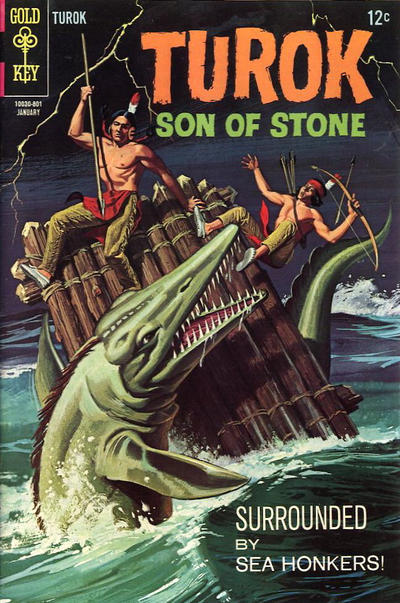 Issue sixty offers up "Scourge of the Sea Serpents" in which Turok and Andar attempt a deadly water crossing amongst a multitude of water-going Honkers. "The Lost Key" is a text item discussing a strange, wooden tablets which give clues to ancient lost languages. The "Young Earth" story "The Giant Conquerors" describes how ancient man battled against even more bestial tribes for dominance in the world. "Guardian of the Pit" finds Turok forced to explore a deadly cavern to save Andar from a murderous tribe. 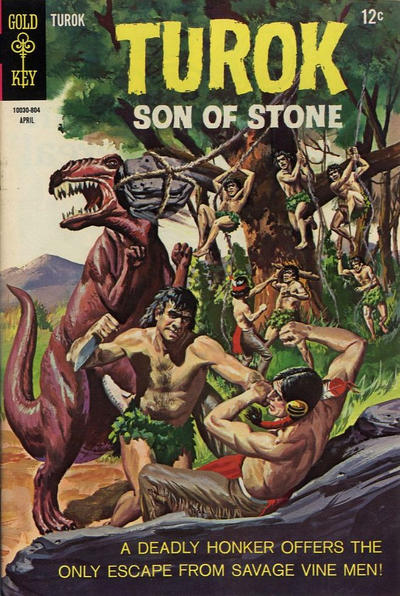 "Survive --Alone" is a powerful story in which Andar thinks that Turok has actually been killed and he spends much of the tale relying on himself and the things Turok taught him. Eventually of course he learns that Turok is still alive, but that's not a great surprise. "Eskimo City" is the text item discussing a settlement of Eskimos who lived in a larger village contrary to the norm. "Young Earth" features the "The Reindeer Hunters" who have to develop spear throwing technology to succeed in the hunt. "Dinosauria: Styracosaurus" initiates this vintage series showcasing various dinosaurs. "Prisoner" is a tale in which both Turok and Andar are captured by a tribe of Vine Men who want the pair to burn down a grove next to their enemies the Hill Men. But the rub is the poison berry patch which the duo rely on to slay the deadly Honkers is in that very grove. 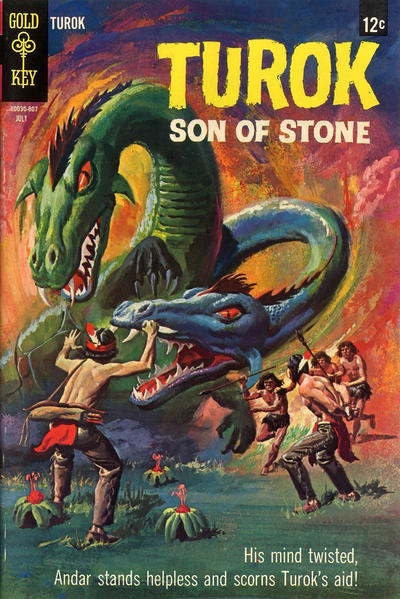 Issue sixty-two dated July 1968 gives the reader a strange two-part tale in which Turok and Andar encounter a strange drug which might show them the way out of Lost Valley. The tale told in two parts is titled "Terrors of the Dream". The first half titled "The Dangerous Temptation" has the pair encounter a tribe in which a medicine man claims his drug gives him the ability to see into the future among other things. Andar is anxious to try this drug. He does in "Andar's Nightmare World" and he is at the mercy of his altered state when he encounters many deadly Honkers who are changed into even more deadly beasts in his vision. "Prehistoric Voyagers" is a text item about how Japanese islanders might have been the first to find the New World. "Young Earth" tells the story of the Elasmosuar, a dominant aquatic dinosaur. "Dinosauria: Iquanodon" continues this feature. 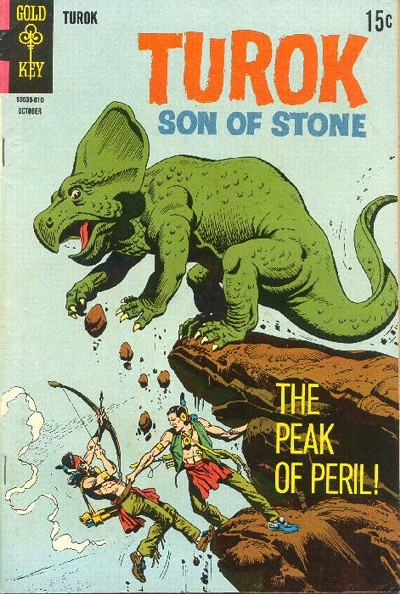 A rare treat is found in the sixty-third issue, a non-painted cover by the Giolitti studio. That's the good news, the bad is that the price per issue jumps to fifteen cents, at the time a twenty-five percent increase. In "Honker Alive--Or Andar Dead" Turok is forced by yet another hostile tribe to find a strange dinosaur to help guard their swampy territory after he and Andar kill the original. Andar is held hostage by these Swamp Men. "The Desert Conquerors" is a text item about Indians who likely migrated from Mexico and brought great skills with them. "Young Earth" describes "The Coming of the Reptiles" when the Earth became too dry for amphibians. "Dinosauria: Proteceratops" describes this ancient creature. "The Peak of Peril" is the second Turok and Andar adventure and has the pair in search of water. They follow an old man they rescue who claims to know where some can be found but it's a dangerous journey up steep cliffs and Andar disagrees with Turok about the reliability of their guide. 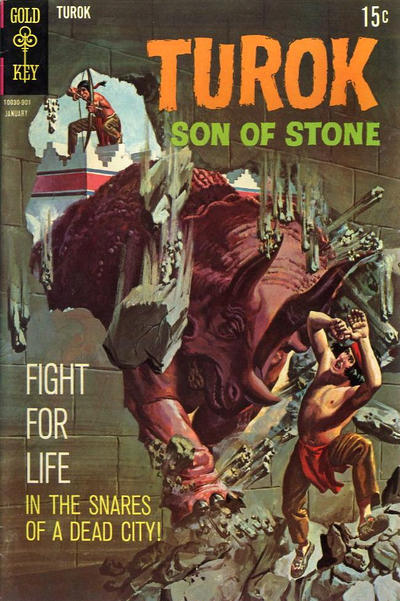 "The Lost City" is a different kind of Turok adventure which finds our two heroes discovering a strange, abandoned city which is well beyond the capacities of any of the primitive tribes they've  so far encountered in Lost Valley. In part one title "The Silent Menace" they come across a strange Honker statue and then the city itself. Andar sees a place they can stay a while to recuperate but Turok remains steadfast that they should keep looking for an escape from the valley. Later while they explore Andar becomes locked in a room. "The Maze of Death" is part two of this different adventure and finds Andar in a strange thorny maze confronted by Honkers. Turok does find him eventually but the mystery of the city remains. "Prehistoric Sports" examines long-lost games sometimes deadly one in a text item. "Young Earth" presents "The Natural Trap" and shows how Neanderthals might've learned to trap the elusive Ibex. "Dinosauria: Ankylosaurus" closes out the issue. 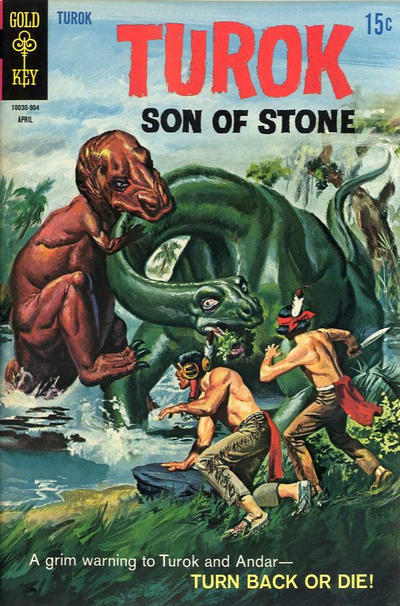 The sixty-fifth issue gives us "The Burial Ground". In part one titled "Turn Back or Die!" Turok and Andar strike upon the notion that they've seen relatively few dinosaur bones in Lost Valley and speculate that there might be a dinosaur burial ground. They follow a wounded dinosaur for a time but are attacked by a cave tribe which worships the area. "The Secret of the Sacred Place" is part two of this adventure and Turok and Andar find the misty region they are seeking but alas it is not what they expected which turns out to be a good thing for Turok. The text item is "The Neanderthal Funeral" which speculates how these ancient peoples might've had regard for their dead. "Young Earth" tells the long story of glaciers and how multiple Ice Ages impacted life on the planet. 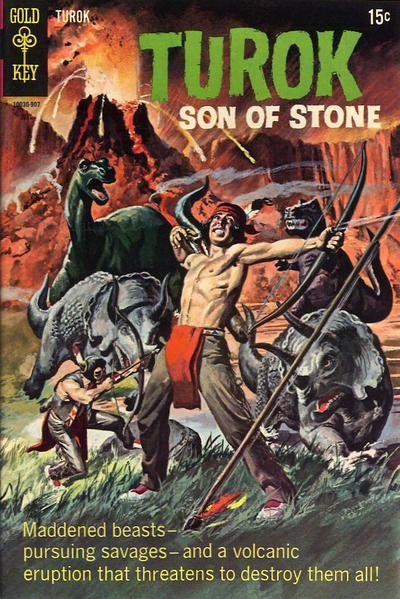 In "The Trap of Flames" Turok and Andar must confront not only the menace of two battling tribes but the arrival of a volcano which threatens the lives of everyone. In the first part titled "The Trap Closes" the duo find themselves caught between two battling clans, but the eruption of a volcano changes the scenario and everyone looks to Turok for salvation. "Death by Spear or by Fire" the second part sees Turok and Andar helping both tribes to save themselves from lava but then the untrustworthy primitives try to bend the pair by making them leaders so as to use their technology. The text item "Prehistoric Americans" examines some of the different ways ancient peoples lived in the New World. The "Young Earth" features "The Vanished Ones" and focuses on strange mammals which thrived then disappeared before the advent of man. "Prehistoria: Neanderthal Man" closes out the issue. 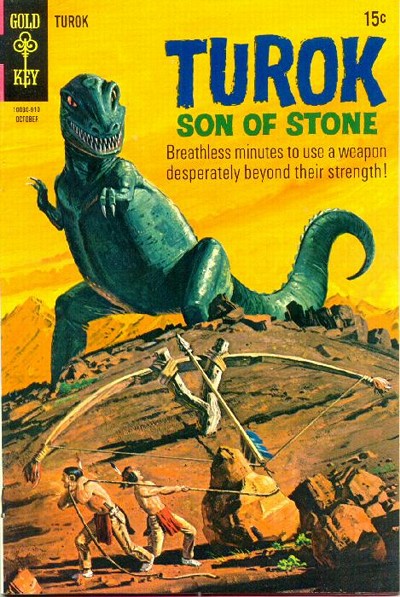 The sixty-seventh issue of Turok Son of Stone dated October of 1969 is the final issue in this final archive edition and ironically it's also the very first issue of this venerable series that I bought off the stands for myself. It's a standout installment which presents our Native American duo a unique challenge. "Two Kinds of Terror" tells the story of what happens when Turok and Andar are made small in Lost Valley. The first part of the tale titled "Andar the Hostage" sees our duo after they've entered a remote canyon by crawling through a small opening. They soon encounter pint-size Honkers and later pint-size people. After drinking from tubs from the tribe both Turok and Andar shrink to fit this strange new canyon. In the second part title "The Magic Weapon" Turok uses his wits to make use of his bow to bring down a threatening Honker. Soon after the pair escape the canyon but run into more trouble when their small size makes them vulnerable to other cave men. It takes some clever thinking for the two to get back their weapons. Eventually of course they regain their normal size. "Prehistoric Americans" is the text piece that talks about various early peoples of the land. And the "Young Earth" revealed that animals in prehistoric times often found greater safety in herds.
And that's a wrap my fellow Turok fans -- almost. 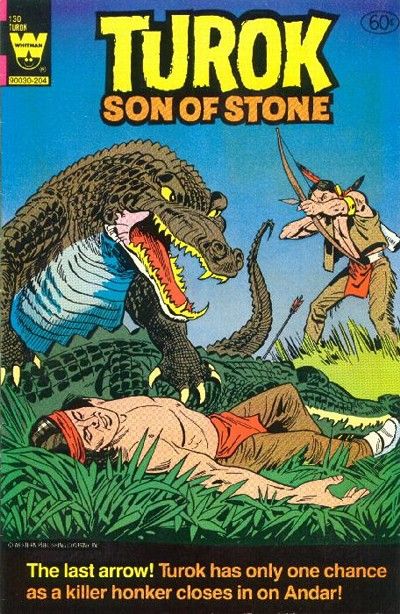 Turok Son of Stone rumbled along throughout the 1970's and last into the 1980's until its one hundred and thirtieth issue dated April, 1982. Turok even outlasted Gold Key itself  when Western Publishing dropped the noble brand and went with Whitman for its final comics. 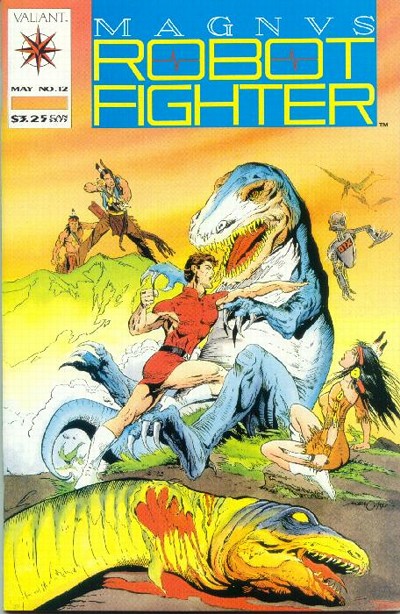 Then in the 90's along came Jim Shooter who got the licenses to the then defunct Gold Key heroes and used them as the core of the launch of Valiant Comics. I was great admirer of what Shooter and his team tried to do with Valiant, seeing it at the time as a smarter version of the disruptive Image Comics. Marvel and DC were on their heels and the direct sales market was ripe for the taking and Valiant was a heavy hitter in the incursion. After the revival of Magnus Robot Fighter and Solar Man of the Atom it eventually was Turok Son of Stone's turn for a revival in the pages of Magnus Robot Fighter number twelve. The lost Valley was reimagined as another dimension and became the hub for the Valiant "Unity" event. Turok and Andar showed up to take part. 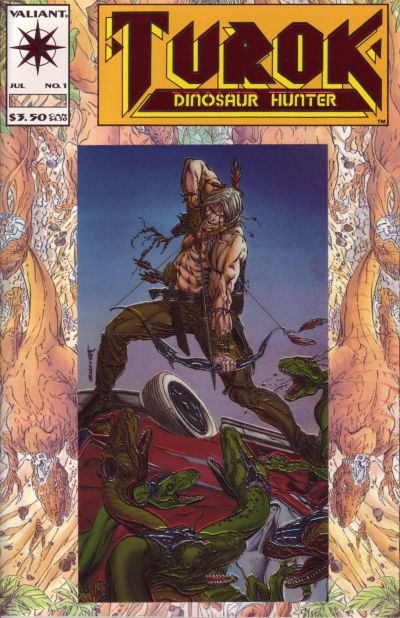 Later Turok Dinosaur Hunter became a "hot" number one issue and featured Turok in our modern world, a savage warrior who was more than capable of dealing with strange smart Honkers which had invaded our dimension. The series lasted around fifty issues or so with a bunch of special editions as well under both the Valiant and the later Acclaim brands. Turok captured the imagination of a new generation and had success as a video game and even popped up as animated movie. 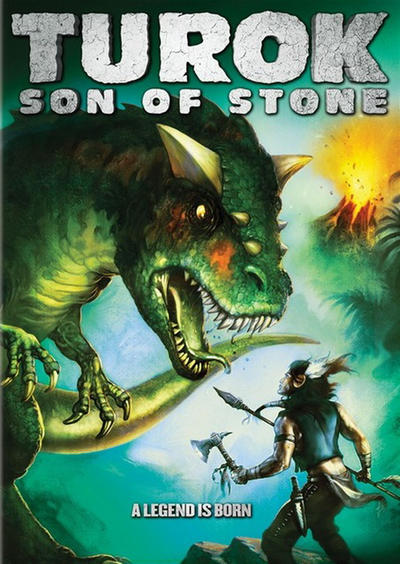 Now the "Turok" in some of these venues is not the Turok I know, but the name still has power. It did for me when I first stumbled across it on the newsstands and saw two small Native American braves trying to launch a giant arrow at a threatening dinosaur. Great stuff indeed.
Rip Off
Posted by Rip Jagger at 12:00 AM
Labels: Alberto Giolitti, Dark Horse Comics, George Wilson, Gold Key Comics, Paul S. Newman, Turok Son of Stone, Valiant Comics