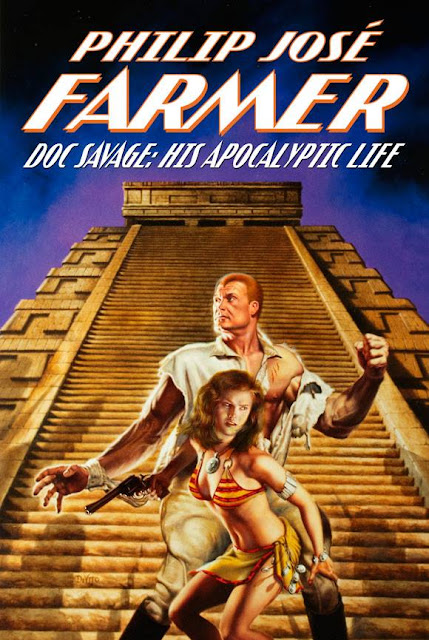 Doc Savage - His Apocalyptic Life is the sequel of sorts to Philip Jose Farmer's Tarzan Alive - A Definitive Biography of Lord Greystoke. The latter work told the life story (up to a point) of the great King of the Jungle popularized by Edgar Rice Burroughs in his extensive series of novels. Lord Greystoke though is only one member of an illustrious family dubbed by Farmer and other modern researchers as the "Wold Newton Family". These are descendants of a curious band of folks who happened to be present in Wold Newton when a meteor dropped and bathed them all in a special ionized radiation which seemed by inference to have a profound effect on their progeny. And Farmer tells the story of Lord Greystoke, the epitome of the savage feral human and in this later work focusing on the crime-fighter Doc Savage he does likewise for the epitome of the modern technological man. 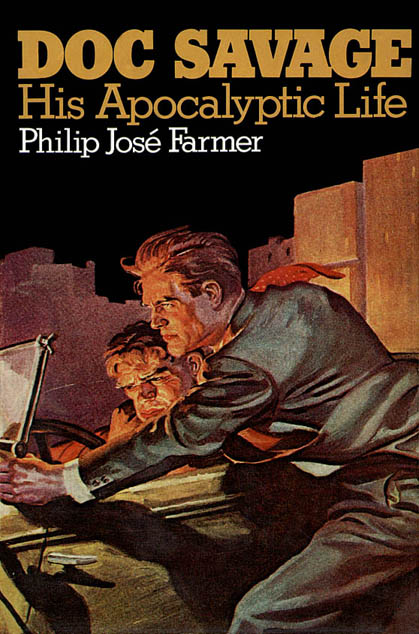 The subtitle refers to Farmer's opinion that the threats to mankind which required Doc Savage's intervention were of such earth-shaking quality as to earn the term "apocalyptic". Doc Savage is no less than a supremely trained superman who saves the planet on a nigh regular basis -- monthly in fact as revealed by Street and Smith's publication schedule for the popular pulp hero. Farmer spends a good deal of time in the early chapters connecting Savage to the work of writers like William S. Burroughs and Henry Miller, suggesting that the works of these writers share in many respects Savage's apocalyptic framework. The details of Doc's life are explored and a timeline is suggested, one which is often at odds with the sequence of the novels. Then Farmer explores the life and times of Savage's "biographer" Lester Dent who with a few other pulp mavens detailed the stunning events in Savage's life adding in necessary fictional elements where necessary. 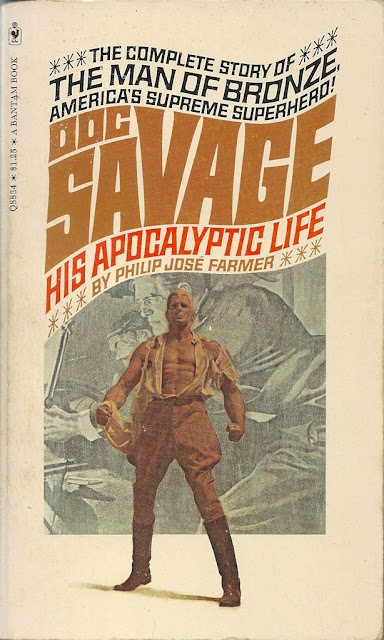 Then Farmer goes to extensive lengths to talk geography and architecture, specifically the location and layout of Doc's skyscaper headquarters in the Empire State Building. It is revealed by Doc had played a seminal part in its construction allowing for his future offices and even an elaborate tube system for quick transportation to the Hidalgo Trading Company, a false business where many of Doc's amazing machines reside. Farmer is meticulous in his examination of the location referring constantly to the "super sagas" for information on how the sites changed over time. Tarzan is a man who is ideal when reduced to his most basic needing only his father's knife to cleave his way to success. Doc Savage in contrast is a man of technological marvels which enhance his own ideal physical gifts. Tarzan and Doc are two sides of a coin, superior in their ways but always perhaps best understood in contrast. As it turns out they are also cousins. 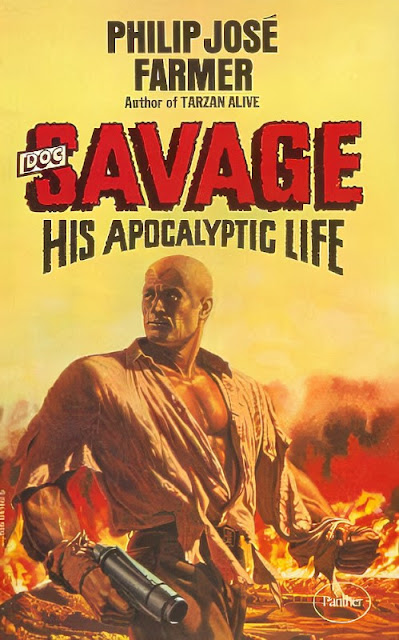 Also identified as a member of the elaborate Wold Newton clan is Monk Mayfair, Doc's ape-like associate who just so happens to be a famed chemist as well. His rough exterior is contrasted in the tales by his best mate and rival Ham Brooks a dapper lawyer. These two are the primary agents of Doc's "Fabulous Five" but are joined by Renny Renwick an engineer of renown, Long Tom Roberts an electronics wizard, and Johnny Littlejohn an archeologist and geologist of note. These five men are loyal to Doc and often hungry for the adventure they find by association with him. Farmer dedicates a chapter to each of the five men, plucking the "true" from the fictional. Getting special treatment is Doc's cousin Patricia Savage who shares many of Doc's singular physical gifts. One gets the feeling that PJF has a crush on Pat, or at the very least he implies that Doc might. 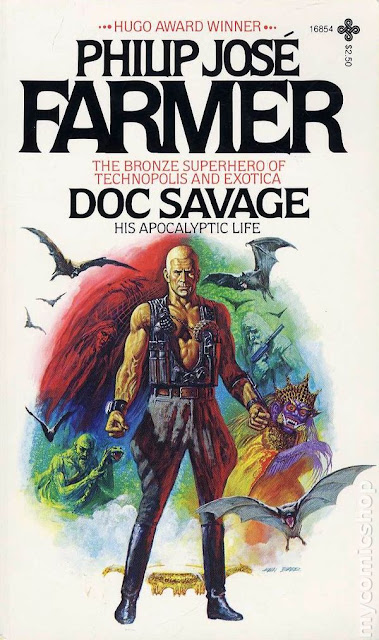 Doc Savage - His Apocalyptic Life is a grandly entertaining book for Doc Savage fans or for fans of the Wold Newton Family itself. We get not only what has been described but chronologies of the "super sagas" and expansive family trees to show the connections among the many disparate personalities in the Wold Newton Family. In the Altus edition which I read this time we are treated to a forward titled "Book of Magic" by Win Scott Eckert in which he details how he came across this tome and how it became a linchpin work for his imagination. I identify with much of what Eckert describes as I was discovering many of these same works at the same time such as The Rocketeer by Dave Stevens which treats the reader to some unofficial Doc Savage action. 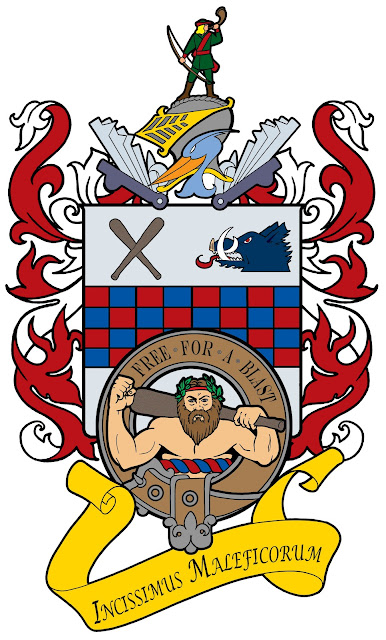 When I first read this book by Farmer I'd read only a smattering of the "super sagas" but thanks to Anthony Tollin's reprint program from a few years back I now have read them all. Armed with that detailed knowledge this book by Philip Jose Farmer is even more enjoyable.
Rip Off
Posted by Rip Jagger at 12:00 AM
Labels: Doc Savage, James Bama, Joe DeVito, Ken Barr, Lester Dent, Philip Jose Farmer