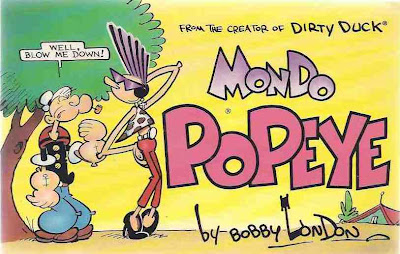 For a relatively short time in the late 80's Bobby London, former Air Pirate and creator of Dirty Duck (the best comic strip in National Lampoon) was the artist on Elzie Segar's venerable Popeye comic strip, taking over from Bud Sagendorf. London's artwork was ideal for the comic, his style a nice updated turn on Segar's classic look. So I was delighted when I stumbled across the collection above by London featuring his work on the strip. It's a bit warped from water exposure, so I got it for small money, and that's fine by me because the strips are all there in their black and white glory.

But alas the staid folks who controlled the license of Popeye were not amused by London's social commentary most notoriously evident in a strip which spoofs the then popular Miami Vice, but also puts out front and center the mysterious nature of Popeye's go-to leaf Spinach.

The artist was fired off the series when some later, unpublished-to-this-day strips making reference to abortion were deemed too much. The powers-that-be then confirmed they feared the present day when they replaced London's new material with reprints which continue right to the present day. It's a shame, since the acerbic Popeye and his gaggle of  characters might well have something interesting to say about the world we live in.