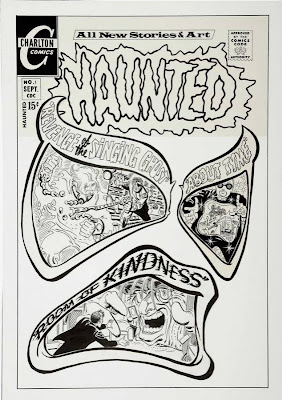 In the final months of Sal Gentile's reign as editor-in-chief at Chartlton, the company rolled out Haunted, a series featuring some lush Steve Ditko covers and typical Charlton ghostly stories inside.

The host of this comic was the mysterious "Impy the Imp", a tiny ghost all decked out in a white costume of some sort. Though not featured on the debut cover (unless like me you imagine that is Impy's face we see this one time only), Impy held sway in the comic for quite a while before giving way to Baron Wierwulf and his Haunted Library. (See here.) The title was retitled (at least on the cover) and Impy disappeared into the dim recesses of Charlton lore.

Here are Impy's Haunted cover appearances as illustrated by Steve Ditko, who is almost certainly his creator.