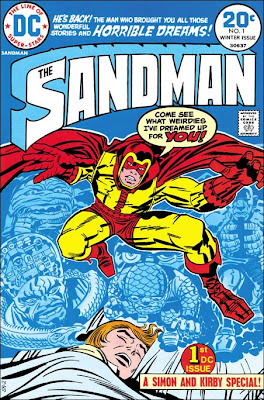 Simon and Kirby came back together in 1974 for one more offbeat collaboration for DC Comics. Both men had been working on their own highly idiosyncratic creations for DC and obviously it must've been a desire to see this dynamic duo reunite to rekindle the magic of bygone days. They resisted but did do The Sandman. 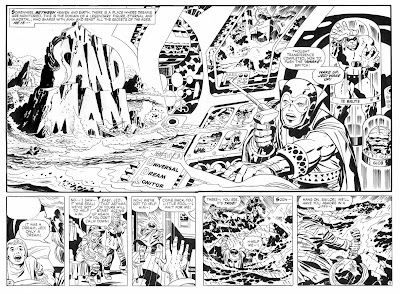 It was a one-shot dated "Winter Issue" for 1974. Under a dynamic cover by Jack Kirby and Mike Royer, we meet a young boy named Jed in the throes of a mighty nightmare about a man being hurled up on the breakers in a powerful storm, and he clutches a green scaly doll. He alerts his Grandfather and sure enough they find a man on the rocky shore of Dolphin Island. They rescue him from the water but he succumbs leaving behind the hideous doll. 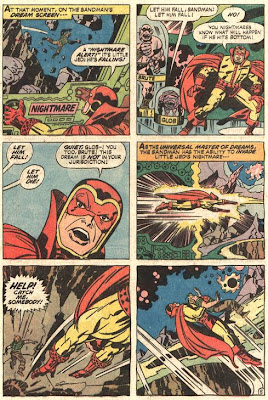 Sandman, a yellow and red superhero stationed at his Universal Dream Monitor in a zone between reality and dreams gets alerted to the problem. He invades Jed's dream in which Jed is being assaulted by a version of the doll. Jed's grandfather attempts to destroy and bury the offensive thing. 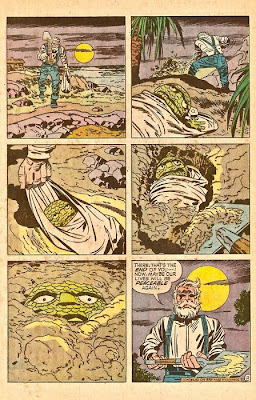 We then meet General Electric, a former Japanese WWII general who has suffered extreme brain damage and has been fitted with a transparent prosthetic skull loaded with mechanisms to take the place of his lost brain matter. He has a similar female-looking doll. Sandman meanwhile is alerted to a fire caused by an earthquake, where the authorities are unclear of his intentions. 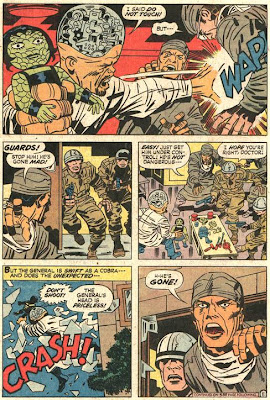 On Dolphin Island Jed finds the creepy little doll his Grandfather hid, but is assaulted by a trio of WWII leftovers. Sandman comes to his aid but both are captured and taken before General Electric who uses the two dolls he now has to ignite explosives hidden in Washington, DC. 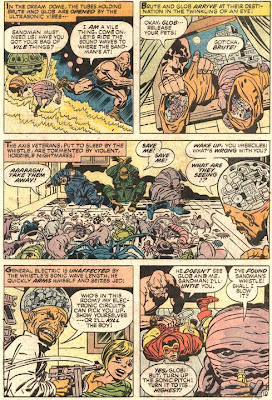 Sandman has a whistle which can summon his two assistants, Glob and Brute, and it gets blown unwittingly by one of the WWII types and the two associates arrive and unload a bag filled with weird dream creatures which defeat the WWII gang. The whistle then is blown and shatters General Electric's glass skull. The heroes escape and the threat is ended as they head back to the zone between dreams and reality.

It's a wild and wooly comic book and closes out with a rambling essay on the general topic of dreams by Allan Asherman. 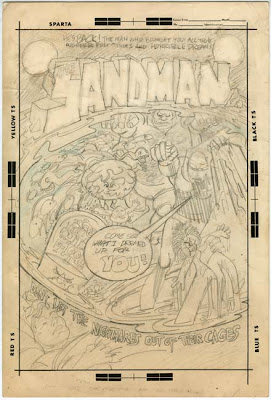 The creation of this issue must have been a fitful process. The cover above is by Jerry Grandenetti and is a version of the debut cover ultimately drawn by Kirby. Apparently Simon wanted to do this comic with his partner on Prez, Green Team and The Outsiders. But that must have been scrapped when Kirby became available. 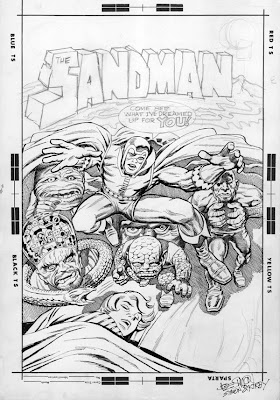 There is a version of the cover inked by Joe Simon too. Both draft covers use logos simliar to one used inside the comic, but neither made to print. A very modern looking logo, doubtless by Gaspar Saldino is the final version.

The one-shot apparently did quite well, and after the infamous paper shortage of the mid-70's, the character was green-lighted for a series. Unfortunately save for Kirby on the covers, none of the original talent aside from inker Mike Royer were on hand for the ongoing. Instead, the scripting fell to Michael Fleisher and the penciling went to Ernie Chua/Chan. 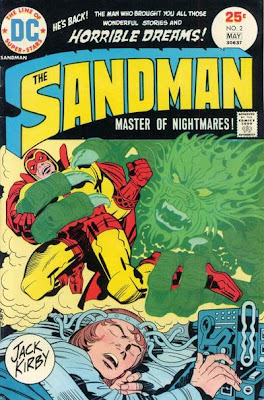 Sandman #2 reintroduces Jed and his Grandfather on Dolphin Island but this time the threat comes from a weirdie named Doctor Spider. The plot is very similar in many ways to the debut. 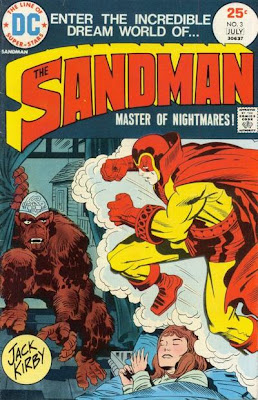 Sandman #3 takes Sandman into the dreams of a young girl named Susie who has a scientist father who is the object of a deposed and somewhat deceased European Count and his Zombie Gorillas. I have to say, the Zombie Gorillas cracked me up. 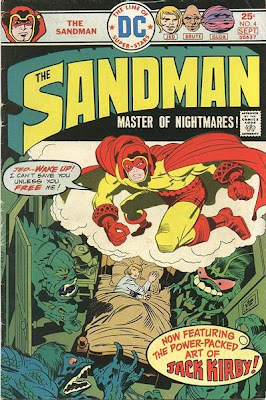 Sandman #4 sees the return of Jack Kirby on pencils for the interiors too, as the hero fends off an alien invasion of Earth through mankind's dreams. Jed and his Grandfather are on hand once again also. 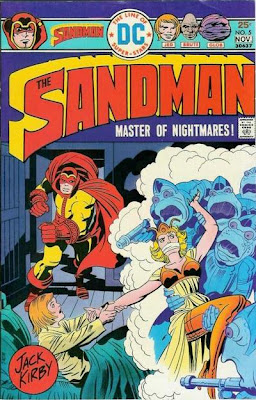 Sandman #5 changes up the status quo as Jed's Grandfather is killed fishing for sea monsters and Jed has to go and live with his repulsive Aunt and Uncle and his two cousins. He is made a defacto servant on their farm but still finds time to help Sandman and escape his harsh reality by rescuing a Princess from a Frog army. 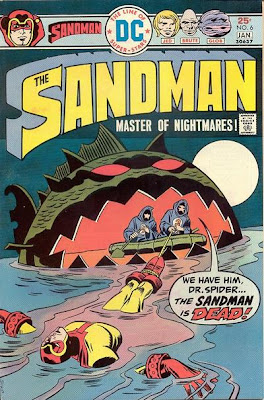 Sandman #6 sees the end of the series. Michael Fleisher scripts his final Sandman saga and brings back Doctor Spider. The artwork on this issue really shines as Wally Wood is tapped to ink Jack Kirby's pencils. There's no indication in the "Dream Dome", the series letter column that his is the final installment, but there is great mention made that the artwork by Kirby and Wood might just be a gem for the ages. 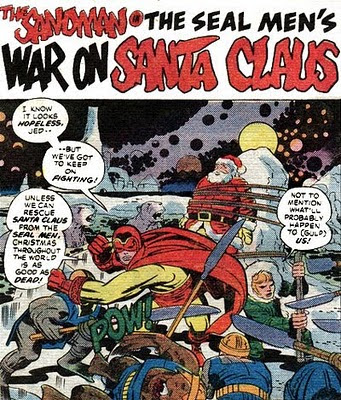 Another issue was planned, but never published, at least not until Sandman's adventure with Santa Claus saw the light of day (sort of) in Cancelled Comics Cavalcade, and later still in 1982 in Best of DC #22 digest. 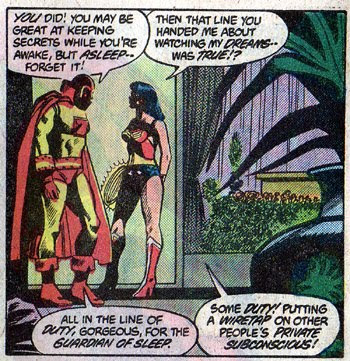 The Sandman then disappears for a time in those Pre-Crisis years, but shows up of all places in Wonder Woman #300 where he is "revealed" to be Dr.Garret Sanford a man trapped in the Dream zone when he tried to save a President. 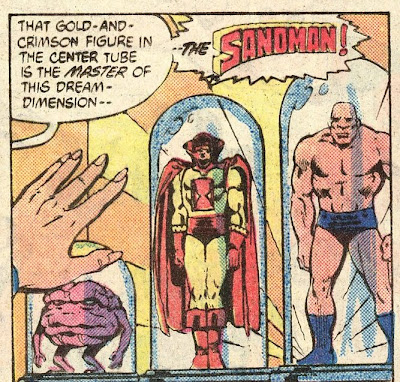 Later still in Justice League of America Annual #1, he's prisoner of Dr.Destiny and the League is needed to help save him and all of reality from Destiny's threat. 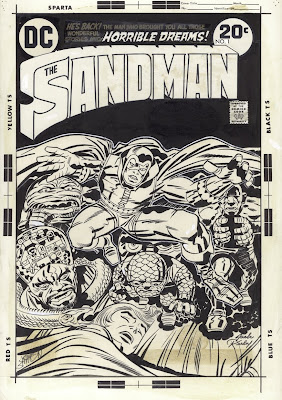 The Sandman series is not utterly exquisite by any stretch. Fleisher's scripts are adequate, Kirby's artwork is not prime, and the inking is sometimes indifferent. The books seem to have been produced quite quickly. But they are a fun read from a time when comics in general and DC comics in particular were bristling with energy if not consistency.

I've never read a single story from the later Sandman rendition by Neil Gaiman. It's just never appealed to me. I like the Golden Age Simon and Kirby version well enough, but to be honest my favorite is this wacky mid-70's model. For all its many weaknesses in presentation, it's a comic brimming with charm, and that's a rare thing indeed.