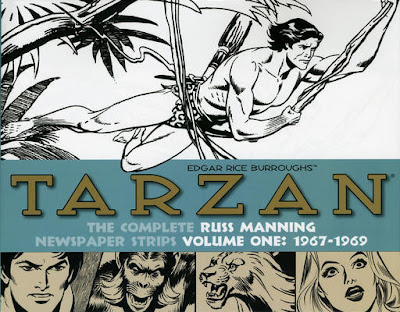 It has been a fascinating year so far. I've had the fortune to read many Tarzan stories by many comics creators. The earliest Tarzan comic strip by Hal Foster, both the experimental dailies and the trendsetting Sundays. I've read the canon of Burne Hogarth who gave the Ape Man an idealized mythic veneer. Jesse Marsh who drew the earliest original Tarzan comic books for Dell added his spare but dynamic approach to the world of ERB's jungle. Add in names like Thomas Yeates, Bo Hampton, Morris Gollub, George Wilson, and Joe Kubert among others and the cavalcade of fine comic artists who have drawn Tarzan is most impressive. Now it's time to look at the artist who was for many Tarzan fans of my vintage the definitive artist on the character -- Russ Manning.
IDW has collected the Tarzan comic strips by Manning and his assistants (Bill Stout, Dave Stevens, Mike Royer and others). These are gorgeous comic strips and handsomely presented. The first volume covers the time from late 1967 until early Fall in 1969. Both the daily strips and the lush Sundays are included. Manning not only drew these fantastic comics, but he also wrote them. According to the very personal introduction by Stout, he did this to music of opera. (Not my choice but to each his own.)

The dailies have officially two continuities or stories. "Tarzan, Jad-Ben-Otho" kicked off Manning's work on the strip with our hero cleaving more closely to the classic ERB novels as he says goodbye to the treehouse and sets up camp on his sprawling estate. But in true Tarzan form he finds Jane missing, looking for him. She is quickly kidnapped by a rogue ape named Tergash. After she is rescued from that mishap, she is scooped up by the shaggy men from Opar. Tarzan of course rescues her again, with the reluctant help of the doting La only to find himself swept away into the land of Pal-Ul-Don where the bulk of this tale takes place.  For her part Jane is swept along a different stream and ends up home. But that only means Korak goes looking for his errant father. This is a very sweet adventure and ends with Korak staying in Pal-Ul-Don.
"Tarzan and the Renegade" begins with Tarzan rescuing some folks and contending with some very strange underground dwellers called the "Palids" by the missionary who has lived among them for decades. Tarzan of course finally gets free and gets home in time to confront General Auric who wants to free the Waziri from Tarzan's oppression and doesn't take it well when the Waziri indicated they work with Tarzan by choice. the struggles are rugged and deadly but the appearance of dinosaurs in the jungle of Tarzan brings the story back to Pal-Ul-Don and a tribe of flying primitives. Jane of course is kidnapped again and when the balloon she and her captors collapses the dino action is full on. 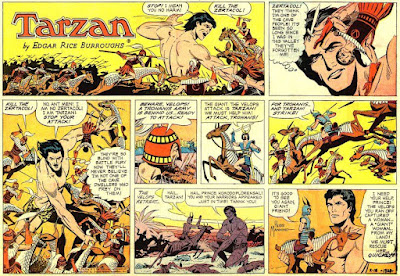 "Tarzan Returns to the Land of the Ant Men" is pretty self-explanatory and kicks off the color Sunday section of the collection. Tarzan and two downed flyers are trapped behind the deadly thorn forest which shields the lant of the Ant Men and are even for a time shrunk to tiny size. But eventually they get free and grow up again.
"Tarzan and the Return of Dagga Ramba" is a terrible title in that it gives away the surprise when Tarzan's old enemy returnst his time with the help of ancient Egyptian magic which can make people into superhuman hybrids resembling ancient gods. There's a hyena-man, a crocodile-man and a hippo-man among others.
"Korak and the Elephant Girls" features Tarzan's son as he has to contend with two strange women who protect sacred animals by means of seeming magic. Tarzan for his part finds his way back home and even spends time with Apes and participates in a Dum-Dum.
These are splendid stories, and my summaries don't begin to do them justice. The Tarzan from the novels is fully on display here and magnificently presented in the lithe spare lines of Russ Manning. More to come next week.
Rip Off
Posted by Rip Jagger at 12:00 AM
Labels: Russ Manning, Sunday Funnies, Tarzan of the Apes