Lex Of The Jungle! 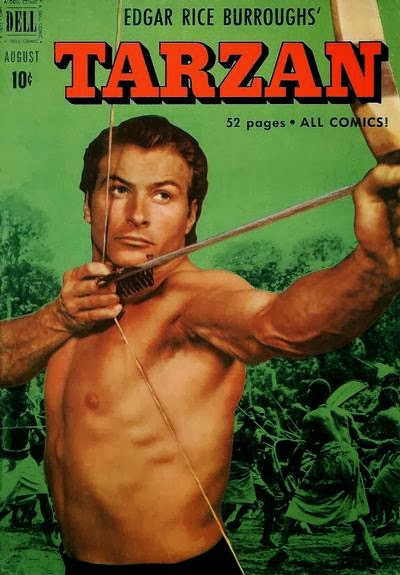 When at last it was time for the great Johnny Weismuller to leave the trees as Tarzan, the next guy to step into the role was the very handsome and physically impressive Lex Barker. Much was made of Barker's long blonde hair, but for all that he looked the part pretty well, much better alas than than Weismuller had for many years. 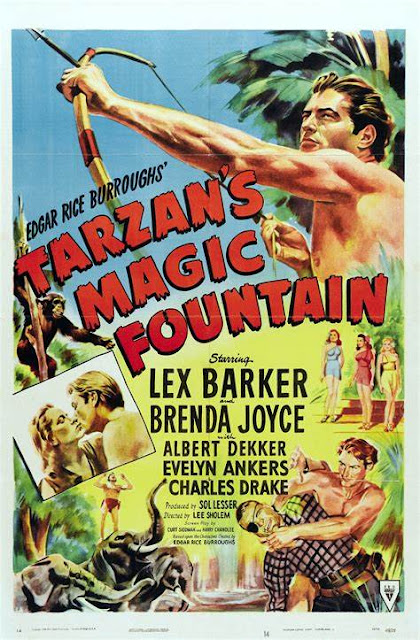 Barker's first outing as Tarzan was 1949's Tarzan's Magic Fountain, a curious tale about a hidden society which nurtures a secret which keeps them young for longer than the normal span. A missing woman,a  flyer similar in many ways to Amelia Earhart has lived among these people for some time and only Tarzan has held this secret. A clue turns up which reveals she is alive, and Tarzan grudgingly agrees to seek her out since it turns out a man has spent two decades in prison unfairly for a crime she can alibi him for. Tarzan gets her, but her shocking youth (which begins to leave almost immediately) reveals the secret of the hidden land and needless to say folks want to find it.

This is considered by many the best of the Barker Tarzan movies, but while it's pretty good and has some nice ERB touches, I was put off by the character of the aviatrix played by Evelyn Ankers, who selfishly I think wants to return to the hidden land. It just didn't track. Brenda Joyce who played Jane with Weismuller does the same here, her final bow. In fact, weirdly Barker will have a different Jane in each of his movies. I notice that in many of the movies we first see Jane sleeping and Tarzan opens a door in the treehouse to discover her, almost as if to say who will it be this time -- a bit of sleeping beauty there. 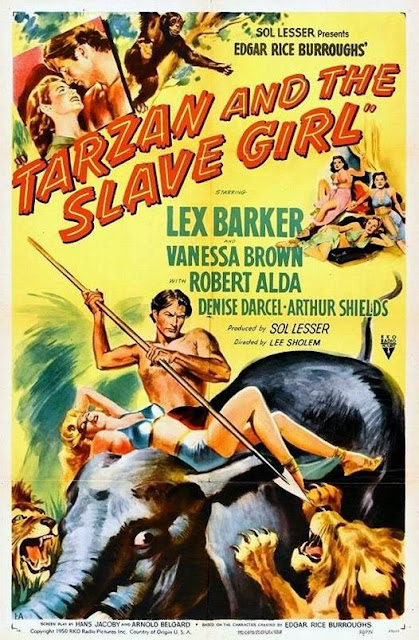 Tarzan and the Slave Girl is a raucous action-filled 1950 Tarzan yarn that rarely catches its breath. This one is my favorite of the Barker Tarzans by a good stretch. The story starts with a bang when some weird looking dudes in outfits which seem more at home in a Prince Valiant movie kidnap Jane and some other girls and haul them back to their hidden city, a city with a culture which seems a blend of ancient Egypt and Babylonia. The girls are there to re-stock the population which a disease is slowly decimating. Tarzan needless to say, pursues and with watching Barker dash across the rooftops and crypts in this movie is a awesome. He is a fully developed high-leaping action hero here.

Vanessa Brown plays an above average Jane in this one, and she has some neat company as a chick named Lola also has a hankering for Tarzan and she and Jane have a fine tussle or two before the movie is done. This movie seemed to me to have the ideal blend of action, fantasy, and humor which a good Tarzan flick ought to have, with very little of the latter. Barker's Tarzan is lethal and dangerous, something which went missing in the later Weismuller flicks. 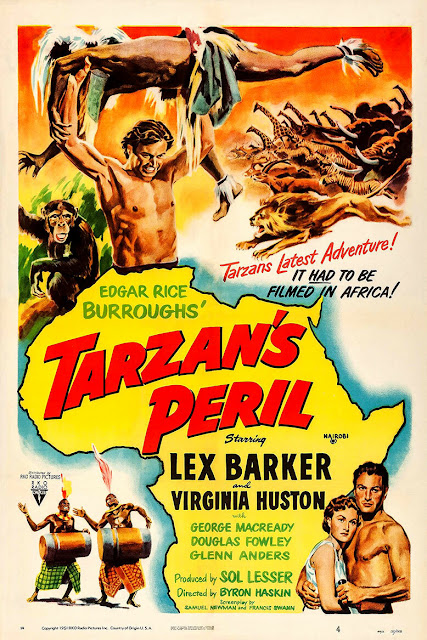 Tarzan's Peril from 1951 is an odd one, blending a lot of legit African footage with the traditional studio jungle action. The African footage is pretty good stuff, but the producers clearly wanted to make the most of it, and as a consequence this one takes a long long time to get started. Tarzan doesn't show up at all in the movie until a fifth of the way in and then only in fits and starts. The story is about some gunrunners who kill their way through the bush. One of them is an old enemy of Tarzan's and of Jane's  (Jane this time is played very primly by Virginia Huston) and Tarzan does even mix it up much with the baddies until the last quarter of the flick.

The pacing hurts this movie, which does have some real texture and some good acting in the villain category. But the wild and dangerous Tarzan we encountered in the last movie seems to have been tamed quite a bit in this one. He and Jane look like a jungle version of Ward and June Cleaver as they eat properly in their quaint and weirdly domestic treehouse. Dorothy Dandridge plays a beautiful African queen in this one, but she has relatively little to do besides look stunning. One thing this one does do is use blacks to portray Africans, a novel thing at this point in the series since a lot of Tarzan's encounters have been with with non-specific ethnic cultures. 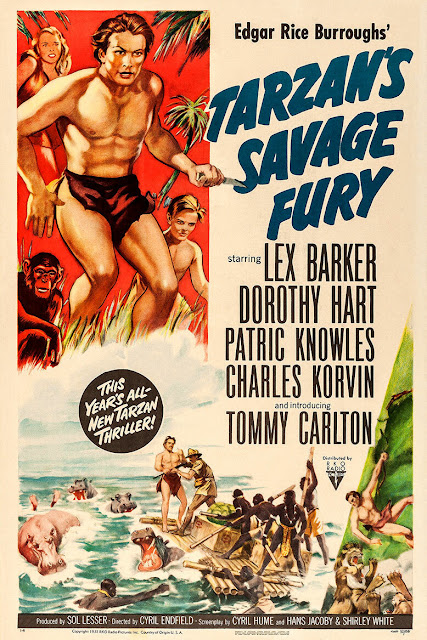 Tarzan's Savage Fury from 1952 picks up the action a notch. Tarzan and Jane (this time played by the beautiful Dorothy Hart) lead an expedition into yet another remote land so that diamonds can be found to support England in its time of need. Tarzan's back story comes into play as an imposter pretending to be his cousin makes the request and is accompanied by a fellow named "Rokov" who clearly seems to be an enemy agent. Tarzan and Jane make a long journey, a full-blown quest not seen since Tarzan Escapes. The action is furious, and the "savage fury" referred to in the title does show up with deadly results.

The knock on this one is "Joey". The producers thought for some reason it was a good idea to recreate the jungle family and have Tarzan discover and decide to keep an orphan named Joe Martin who toddles along beside them through the adventure. Truth told he's not too annoying, but his very presence is really unnecessary. Also, the guy who plays Rokov seems to have been a magician and his stunts are on display. He's a dandy good actor and a fine villain, worthy of Tarzan and well deserving of his gruesome fate. 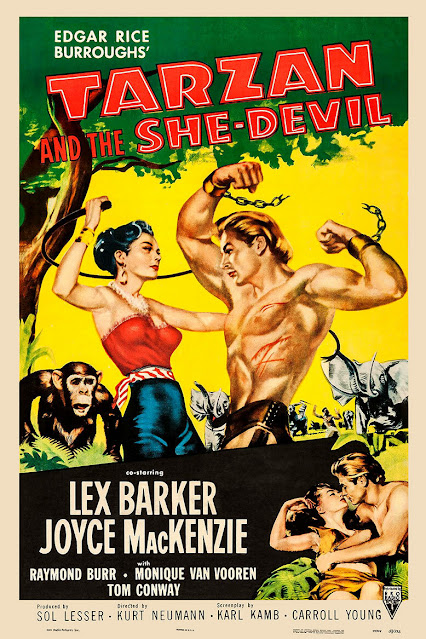 The final Barker Tarzan from 1953 is titled Tarzan and the She-Devil. This one has the Ape Man battling ivory poachers yet again. The "She-Devil" of the title is plays by Monique Van Vooren and she's a little exotic, but that's about it. The real spice in the villainy is supplied by a dastardly Raymond Burr and a conniving Tom Conway. Joyce MacKenzie plays Jane and does a good enough job, though most of the time she's stumbling through the jungle oddly helpless after all these years. Tarzan does eventually stop the poachers and the poachers discover that elephants are really really big animals to fool with.

The weirdest thing about this Tarzan outing is that for much of the flick Tarzan believes that Jane is dead. The treehouse is burned down (symbolically perhaps too as it doesn't return in the next movie starring Gordon Scott). Tarzan goes mildly catatonic, seemingly losing his will to live. That doesn't track at all with the Ape Man I know and sadly makes Barker mope around sit listlessly a lot in his last bow. He does snap out of it eventually, but it takes a while. This is easily I think the weakest of the movies Barker is in, as it just doesn't seem to have enough plot to keep it going. 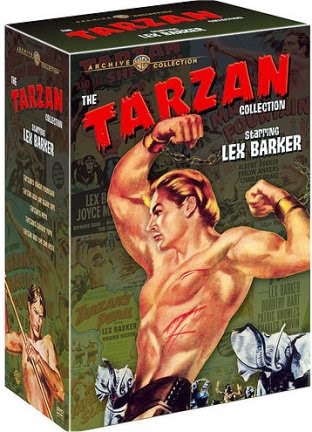 Overall, Barker's Tarzan was an upgrade from Weismuller who was kept in the loincloth too long for everyone's good. (I'm talking to you too Roger Moore.) Seeing someone with youth and vigor battling for his life was nice and spoke to the adventurous essence of the classic eternally-young Tarzan character.

Rip Off
Posted by Rip Jagger at 12:00 AM
Labels: Lex Barker, Tarzan of the Apes