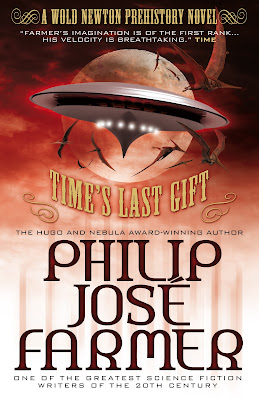 Time's Last Gift is one of Philip Jose Farmer's Wold Newton novels, but one with a decided twist. Now I caution one and all that discussing this book is almost impossible without spoiling it, so unless you have no plans to read it or have already done so, I'd just accept my word for it and grab a copy. Any fan of the Edgar Rice Burroughs will find much to like about this time-travel story. The very title is a clue to the identity of the protagonist. 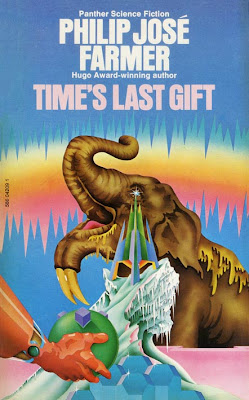 Now with mild spoilers in place, I can relax and say that this untold story of the real Lord Greystoke, the character Farmer postulates was in fact the inspiration for for ERB's Tarzan is a hoot. I thoroughly enjoyed this sci-fi adventure which put four scientists from 2079 into the past approximately 12,000 years ago to explore the rudiments of human civilization in the European continent and somewhat beyond.

This is the story of John Gribardsun, a dynamic and powerful man possessed of black hair, grey eyes and a peculiar animal magnetism who finds himself fully alive in this prehistoric setting. His company includes Rachel and Drummond Silverstein and Robert Von Billmann. These folks are on a four year expedition into the past and live among the natives they find, a diverse group of primitives who display a wide range of very human emotions and behaviors.

The story turns when it becomes increasingly obvious that Gribardsun has an agenda apart from his colleagues. The story is complicated when Rachel is attracted to Gribardsun much to the consternation of her husband. The story tracks the team and their adopted tribe across much of central and southern Europe and even onto North Africa. 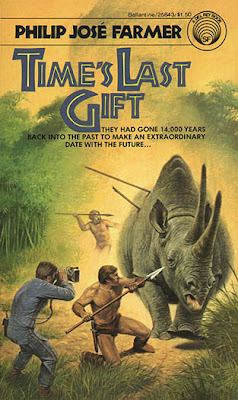 But then it becomes clear that Gribardsun's agenda means he will be staying behind and he lives among the tribe after the team does head back to their original time. That would be interesting enough, save that we learn Gribardsun is immortal and he then turns up again and again throughout history and even contacts the team again with an array of treasures, his many gifts from the mists of time.

It's evident soon in the story that Gribardsun is Farmer's version of Tarzan of the Apes, a noble Englishman born among apes who is more at home in the wild than in civilization. Knowing this is something of an untold and even secret Tarzan story gives it a nifty flavor apart from the pure science fiction aspects which are not insignificant. Without out the Wold Newton elements this might still be a stirring story, with them it elevates to a fascinating saga.

And it turns out a very appropriate book to read on Father's Day as I did, since Gribardsun in some respects becomes the Father of us all. But you have to read the story to find out how that works. 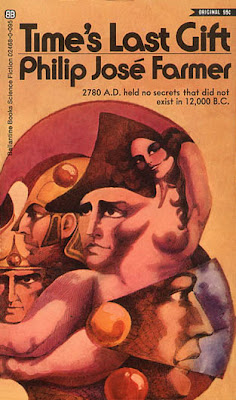 The Titan Books edition which has just hit the stands offers up also an essay on the story by Christopher Paul Carey and a Chronology of how the story fits into the larger Wold Newton timeline by Win Scott Eckert and Dennis E. Power.

I highly recommend this one to one and all.

Rip Off
Posted by Rip Jagger at 5:05 AM
Labels: Philip Jose Farmer, Tarzan of the Apes, Wold Newton Universe