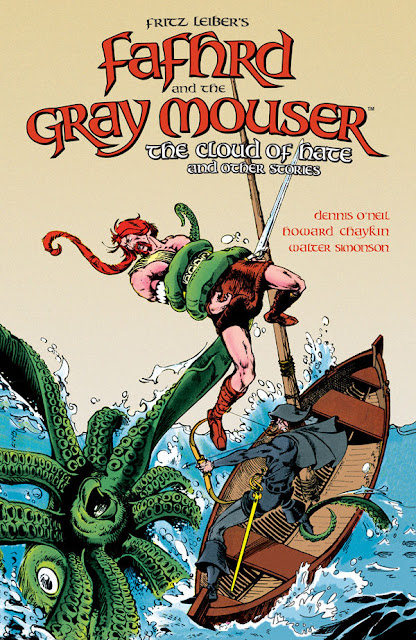 This whole month was kick started by the publication from Dark Horse which gathered for the very first time, the very first comic book adaptations of Fritz Leiber's Fafhrd and Gray Mouser stories by DC Comics way back in the early Bronze Age. The stories in the volume dubbed Fafhrd and the Gray Mouser - The Cloud of Hate and Other Stories are themselves are of suspect craft, but their existence is a pure pleasure in and of itself. But the saga is more complicated even than that. 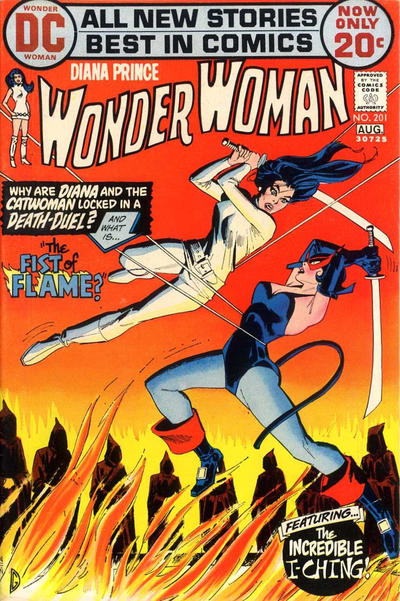 Not included in the collection but rather in another which put together the last of Wonder Woman's Diana Prince stories is the debut of Fafhrd and his pal the Mouser. The story is bit of windy one and in the first part Diana and her mentor of the day I Ching seek to rescue their sometimes partner Jonny Double from the clutches of I Ching's daughter who has kidnapped him to motivate Diana to steal a certain gem. This gem along with its other-dimensional counterpart opens a portal to the world of Newhon. The Catwoman is involved as any decent jewel their might be. At the close of the first part of the story by Denny O'Neil and Dick Giordano the portal is opened and Diana, I Ching and Catwoman find themselves at the mercy of two distinctive swordsmen. 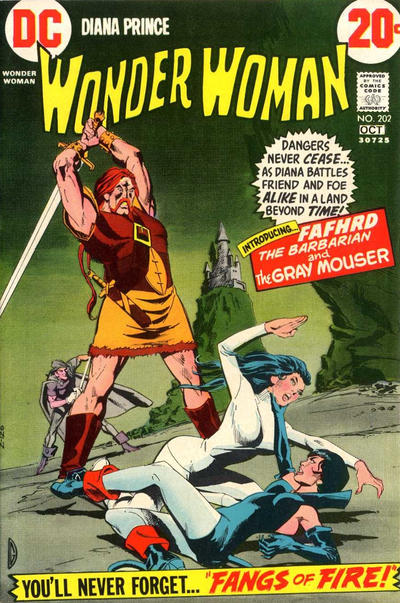 In the second part of the story Fafhrd and Gray Mouser introduce themselves properly and join forces with with our heroes (of a sort) to confront the menace and find a way back to Earth. The battle is at first between the comrades then shifts to the cavernous lair of a sorcerer and his weird machinery. This tale by Samuel R. Delany is magnificently drawn by Dick Giordano and at its end Fafhrd and Mouser find themselves in New York City (and not its Newhonian counterpart Lankhmar) but reject the noise, smell, and hubbub of modern machinery. 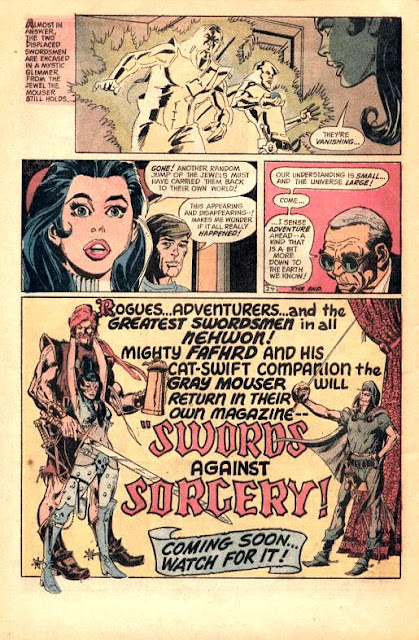 They want to return home and thanks to a jewel they still have they disappear. It's a rouser and sets up the series in a manner of speaking. Note that the series was called "Swords Against Sorcery" in this ad. 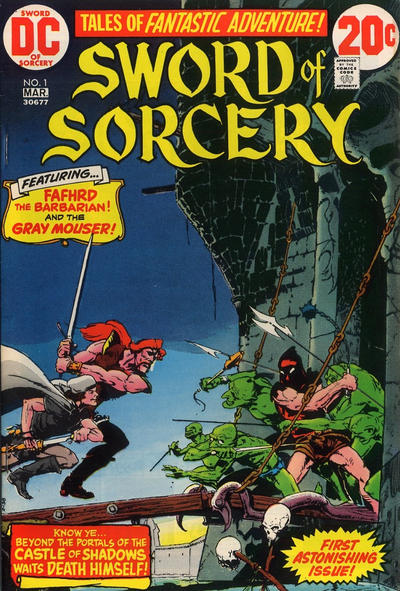 Under a lush action-filled cover by Mike Kaluta, the series dubbed Sword of Sorcery begins with an adaptation by Denny O'Neil and near novice artist Howard Chaykin of Leiber's "The Price of Pain Ease". 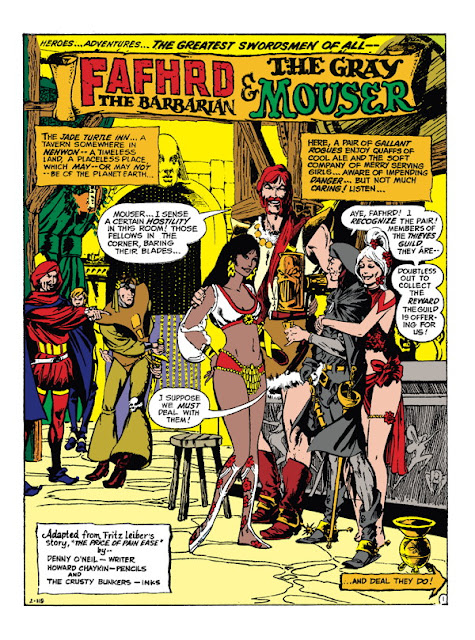 This story is seriously clipped with the removal of the core tragedy which motivates the duo of Fafhrd and Mouser, the murders of their twin loves Vlana and Ivrian as a backstory.We get the raid on the Duke Danius and we get the mission by Sheelba of the Eyeless Face and Nignguable of the Seven Eyes for the mask of Death itself but without the underlying regret of those tragic deaths our heroes seem to lack a bit of motivation and sense they need to ease pain is all but lost. A young Howie Chaykin's artwork is barely serviceable and the storytelling is often clumsy with some truly peculiar character designs. 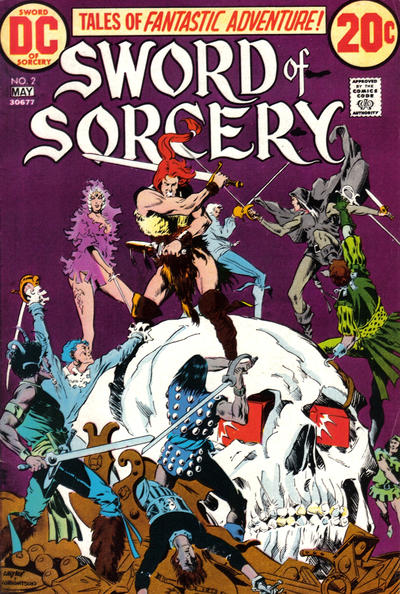 Things look a little bit better in the second issue under a Chaykin cover, this one inked by Berni Wrightson. The story O'Neil adapts this time is "Thieves House" and simplified though it is for comic book purposes most of the misadventure makes it to the page. The horror of the encounter with the bones of ancient thieves is largely lost but the action is ever present. Fafhrd and Mouser trade barbs and quips and they come across with the proper blend of adventure and satire which informs the stories themselves, but again missing the underlying gravity of lives suffering loss. 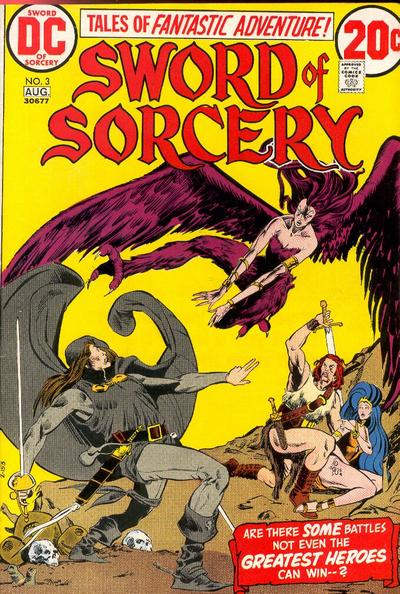 In the third issue we get an original story by Denny O'Neil and a new cover by Chaykin who is getting a wee bit better at the storytelling. We have our heroes waylaid by pirates who steal a girl. After some effort they find the one they thought did them dirt and discover it's more complicated. A beautiful and silent girl with magenta wings and feathers leads to the lout who killed their shipmates and they rescue the girl but find a surprise. With the aid of a dandy deck of cards they wind the day. At long last a death seems to impact the duo, but truth told this story seems to be missing a page or two in its finale. Not that reprint messed up, but I suspect the original dropped at least one page and it makes the end a tad clumsy. 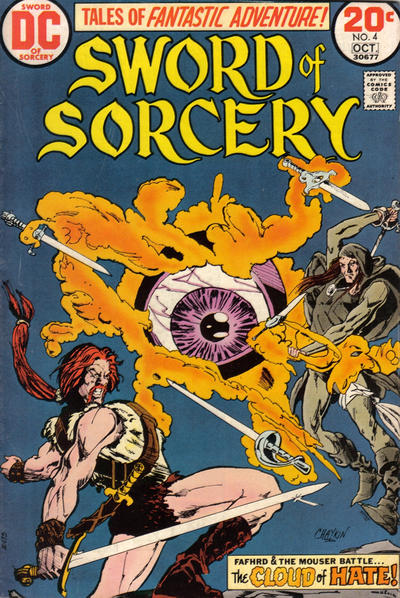 The fourth issue gives us two stories. The first is The Cloud of Hate, an early Fafhrd and Mouser story about a cult which uses a potent fog to enthuse pliable villains to turn to violence in the streets of Lankhmar. The story is simplified a bit but the core remains and our heroes find a solution. 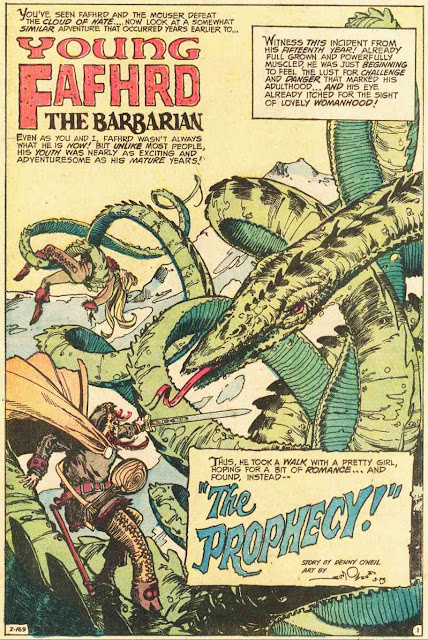 The second story is a tale from the teenage years of Fafhrd himself and tells of his early romance with a blonde beauty and how a Snow Serpent seeks to steal her away. Fafhrd saves her by chance though a prophecy might've shown him the way had he been more attentive. Denny O'Neil's script this time was illustrated wonderfully by Walt Simonson and immediately it's obvious that he should have been at the helm the whole time. 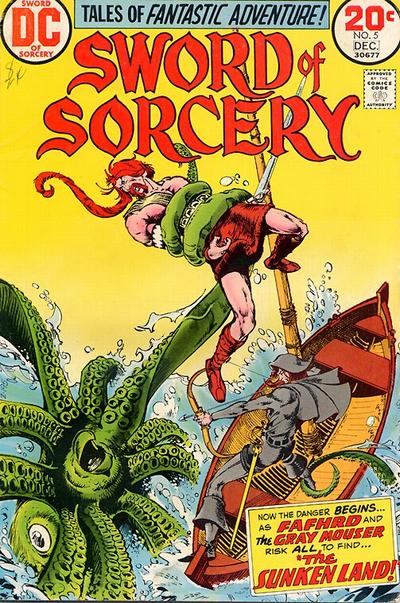 Simonson takes over the lead story in the next issue when the classic Leiber story "The Sunken Land" is adapted by O'Neil. Fafhrd finds a magical ring when fishing and soon enough he and Mouser both run afoul of a no account who is seeking treasure when the hidden land of Simorgya rises from the sea. They get out with their skins barely when dark magic takes over as it usually does in these affairs. 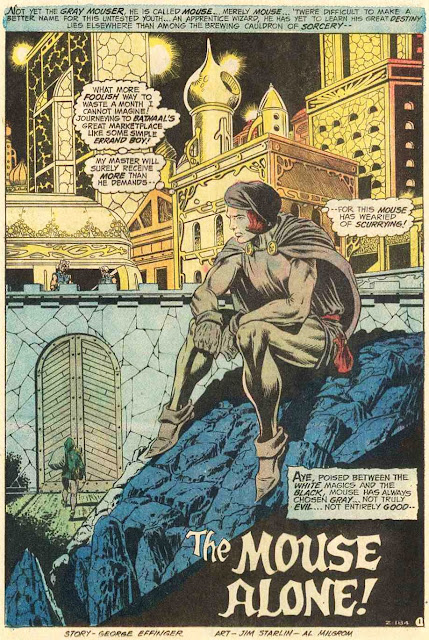 A second story written by George Alec Effinger and drawn by Jim Starlin gives us a peek at the apprenticeship of Mouse (not yet grown to Mouser) and his training in subtlety by a knife artist named Shendai the Deft. This is dandy little tale and features a few cameos, one by a certain Cimmerian is appears. Nice exchange for the appearance of Blackrat and Fafnir in an early Conan story.

This series was not a success in terms of sales. Five issues seems hardly a worthy outing but it was for a very long time the only adaptation of these heroes to comics until Marvel took a tumble in the early 90's and Howard Chaykin is back. To take a gander at some of these stories for yourself follow this very groovy link. More on that one tomorrow.