I recently picked up the second Jack Kirby Omnibus from DC (using some handy store credit) and found it to be an absolute trove of great Kirby material. I got the book to have in hand in one convenient location the myriad stories Kirby did for DC while he was finishing out his early 70's contract for the publisher. It's wild and varied list of projects. He knocked off Atlas, Manhunter, Dingbats of Danger Street, the debut of Kobra, and even an issue of Richard Dragon, Kung-Fu Fighter. Some of these I've long had, but there are a few which have long eluded me. All of the Super Powers stuff is here too.

But that said, the highlight of the volume, at least in this early stage, might just well be the representation of the reprints DC did of Simon and Kirby's venerable 1950's  Black Magic title for Prize Comics. All of the stories published by DC are here, but alas since Simon and Kirby covers are reprinted on only two issues, the wonderfully evocative artwork by Jerry Grandenetti , Creig Flessel and Bill Draut is not included. These are some knockout images, designed to draw in readers like magnets. I own a few well-thumbed copies, but it's so totally neat to have this lush art and story well arrayed for straightforward reading. 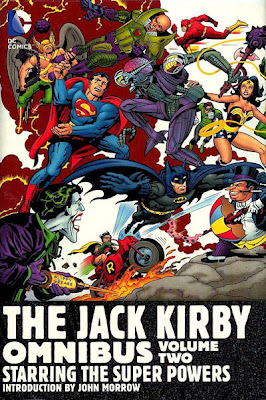 At forty bucks and six hundred pages, Volume Two of The Jack Kirby Omnibus is a bargain. More later I'm sure.