Captain Carrot And The Final Ark! 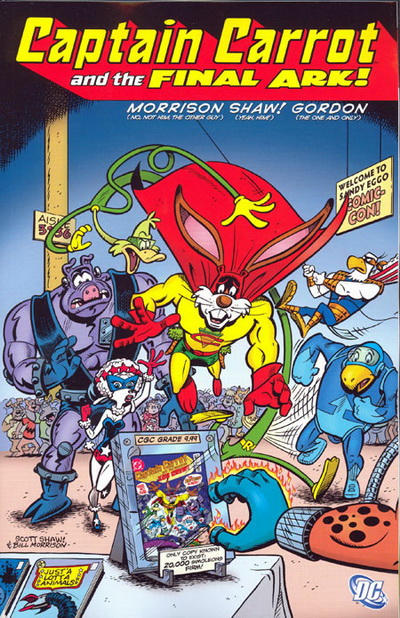 Captain Carrot and the Final Ark is Scott Shaw's attempt to revive the animal heroes he co-created with Roy Thomas many years before. His artwork is the highlight of this small collection and the main reason to get a copy. 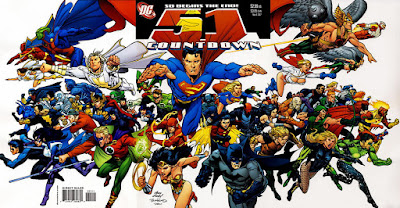 The little three-part story is an offshoot of the sprawling Countdown to Final Crisis series that ran for fifty issues (plus tie-ins) in 2007 and 2008. It was yet one more attempt by DC to try and make some sense of the universe which had been tampered with so many times before. This time the main architect was supposed to be Grant Morrison but things changed and altered and as it turned out little of Countdown lasted very long if at all. This is an old story at this point but there are spoilers ahead nonetheless. 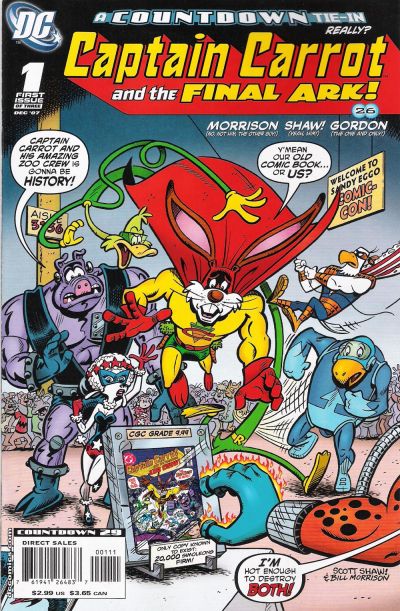 In the debut issue we are treated to an update on the doings of the Zoo Crew and learn that Alley-Cat-Abra had betrayed the team and in fact was accused of killing member Little Cheese. Little Cheese's spot on the roster is taken by American Eagle, a zealous patriot. The story opens in "Sandy Eggo, Califurnia" where the Crew are attending a comic convention. Shaw is in his element here and the in-jokes are fast and furious. They end up fighting an enemy dubbed "Salamandroid" who very strong and can emit fire. There is plenty of hijinks and dark plots but that all comes to a stop when the Crew are confronted with a larger and stronger Frogzilla. 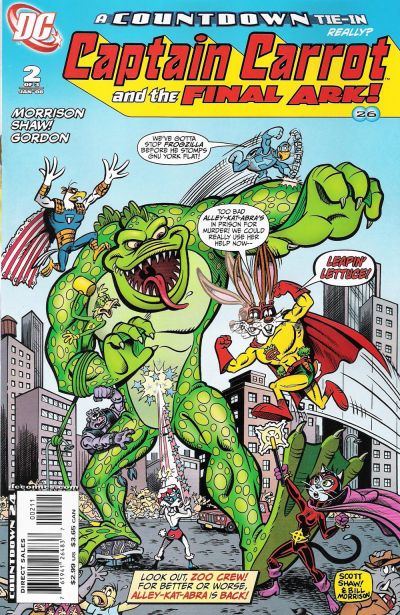 In the second installment the Crew spend most of their time battling Frogzilla with the help of  Alley-Cat-Abra who appears magically and explains it was her evil twin who did the crimes she was accused of. The Crew take back into the fold as they defeat Frogzill and head down into the depths of the ocean to confront the real enemy Starro the Conqueror. Also revealed is the nastiness of Rash Al Paca, who had been plotting with the corrupt President Beneduck Arnold. 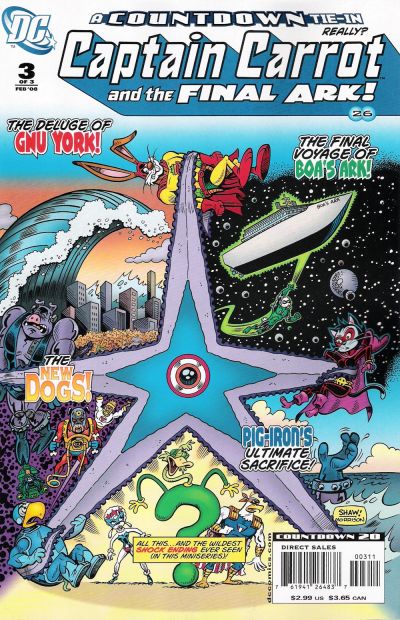 But it's too late to end the global warming which has caused waters to rise to massive flood levels and the animals of the planet are forced to enter Boa's Ark to save themselves. With the help of Justa' Lotta Animals from Earth C Minus the Zoo Crew fend off Starro and take the Ark into space where they encounter The New Dogs. But that is only a brief encounter and soon enough the Ark has landed on the main DCU Earth and the Crew as well as all the other talking animals have reverted to normal critters as you and I might find. The JLA is around to help and Zatanna takes the former Rodney Rabbit as part of her act.
This is a hoot. Apparently Captain Carrot and the Zoo Crew do get back to some sense of normalcy (by their standards) as two them appear later in Final Crisis. It's all very confusing, but the story itself as drawn by Scott Shaw is pretty funny at times.
Rip Off
Posted by Rip Jagger at 1:00 AM