The 1997 Prince Valiant movie is a mixed bag for sure. I finally got a chance to see this flick, a rare gem indeed, unavailable on dvd and not a movie I remember seeing scheduled at my local theater. 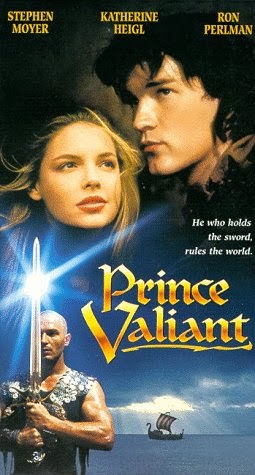 Among the strengths of this movie is a really fine cast. Veteran character actors Ron Perlman and Warwick Davis show up in time to keep the flick motoring during a rather disjointed finale. Steven Moyer and Katherine Heigl are reasonably sound in the lead roles of Prince Valiant and Princess Ilene. They are a handsome pair with sufficient chemistry to keep the ball rolling downhill. Edward Fox as Arthur is okay, but seems to be getting a paycheck mostly. Udo Keir pops up as villainous King Sligon and does a typically oily and dandy job, but leaves the stage all too soon for my tastes. Joanna Lumley as Morgan Le Fay is properly villainous, but seems to be playing her part a bit too ironically. The standout in this one is Thomas Kretschmann as Ragnar, an ambitious and capable Viking baddie who is properly malicious.

This is a strong cast, but unfortunately they are lost in a story that stumbles around looking for some forward momentum which truth told never comes.

The plot, such as I can detect, is that Prince Valiant filling in for Sir Gawain (played by the director Anthony Hickox to sorrowful effect) jousts with the knight intended to marry Princess Ilene who secretly craves Valiant. They seemed to have met sometime before the movie actually started, though this is never really explained. Then Vikings steal Excalibur and King Arthur seems to think the Scots are responsible (they find a scrap of tartan) so he sends all his forces there, but sends only Prince Valiant (again pretending to be Gawain) to protect Ilene on her way home. Meanwhile the evil trio of Morgan Le Fay, usurper King Sligon, and his little brother Ragnar discover they need Gawain (they think) to pull Excalibur from the stone floor of the castle it has embedded itself in much to their chagrin. So Valiant and Ilene are attacked, she's captured, and Valiant follows to Thule after trying to get other of Arthur's forces to believe him. It fails and he's left to get the services of Boltar (the weird giant who it turns out actually knows him) and Pechet, the weird French-sounding dwarf who pledges allegiance to him. They, along with a veritable army of followers sworn to Prince Valiant who has returned since being hidden as a baby by Boltar after his father and mother were killed by Sligon attack the castle and eventually rescue Ilene after much flailing about. 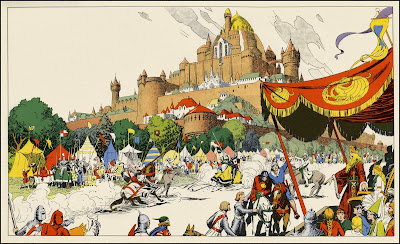 It's a hectic movie, sometimes hard to watch because of really clumsy scene continuity. Solid editing is one of those things in movies you never notice until it's missing. The ability for a film to tell its story by shifting seamlessly from scene to scene is crucial and most do it professionally, but this one doesn't all the time and it makes the experience different to say the least. At times I get a Princess Bride  vibe off the flick, then sometimes it reeks of Kull. Only occasionally does it evoke Prince Valiant, and most of that is done early.

One odd thing is the actual use of Hal Foster's artwork to transition from some scenes and admittedly some of the background castles are remarkable. This movie was shot in Wales and it does have the proper setting feel most of the time, at least when they are outside.

Despite this movie being mostly a hot mess, I'd love to add it to my collection, but alas I find no ready dvd available. I found one new for over a thousand clams, but that seems a bit much. It's a friendly movie, with an echo of The Phantom from about the same time, but without the technical expertise that one displayed. It's worth watching for sure if you can find it.

NOTE: The Mike Grell Valiant cover at the top of this post has no direct connection to the movie. I just like it.